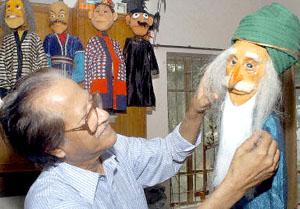 Bangladeshi artist Mostafa Monawar, known as the 'puppet man' puts the final touches to a puppet in Dhaka. 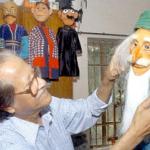 Puppet shows are part of Bangladeshi folklore, but one man is trying to use the medium to spread social messages in a country that has one of the lowest literacy rates in the world.

Mustafa Monwar, known as the "puppet man", puts on shows using puppets made of wood, clay and cloth and also has a weekly children's television programme.

The literacy rate in Bangladesh is 65 percent and most people do not have access to television, books or newspapers, but Monwar said puppets can play a role in education, especially of children. "I adapt the old village tradition of delivering social messages through puppet shows," like preventing AIDS, he said, adding that for generations puppets have been used as entertainment.

One of his puppet stories "Trapped Game" shows how people can live in harmony with nature, while others focus on tolerance and peace or health, development and child education. "In live puppet shows the participation of children in the villages and in the cities are almost the same," he said.

Monwar, 65, credits his father the late Golam Mustafa, a poet, for his interest in puppetry as he often invited troopes to perform at their home in remote Monohurpur village in the western Jhenidah district. But it was not until he was a student that he took it up seriously. "In 1958 when I was studying art in Calcutta, a puppet show came to town from Rajasthan and the quality of their sculpture and simplicity drove me to implement my childhood ideas."

During Bangladesh's 1971 war of independence from Pakistan, he travelled to refugee camps in India to boost the morale of people who had fled the conflict. Despite difficult times the puppets gave them joy as well as messages of patience and eventual victory, war veterans said.

The soft-spoken artist said it takes him about a month to make a puppet, including conceptualizing the character, at his studio in Dhaka. Monwar's fame has spread outside the country and he is the Bangladesh representative of the Denmark-based International Puppet Development Centre. He has received national and international awards, including one for graphic design in an All India Fine Arts competition in 1957. He received the Joinul Abedin Gold Medal for "his outstanding contribution to painting".

His weekly slot on state-run Bangladesh Television has been running since 1965 and is among the channel's most popular programmes. But he does not limit himself to puppetry, also making films and encouraging new talent. "Bangladesh has a very rich literary heritage and when I like a story I think of turning it into a film," he said. This "is sharing a good story with many others as reading habits are falling away every day," he added.

His teleplays include the Taming of the Shrew by William Shakespeare and Raktokorobi by Rabindranath Tagore. The noted Indian filmmaker Satyajit Ray lauded Monwar for his crafty use of stage design and the atmospheric aspect of his television productions.