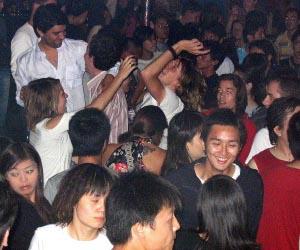 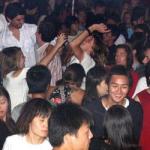 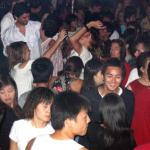 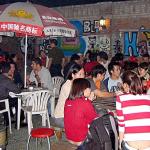 With more than 30,000 foreign students living and studying in Beijing, a part of the capital's Haidian university district has turned into a cosmopolitan party center where students from around the world gather against a distinctly Chinese backdrop.

Between the prestigious Tsinghua University and the boisterous Beijing Foreign Languages University lies Wudaokou, a half rural, half urban area a decade ago, but today another quaint quarter in the capital that has been completely rebuilt.

Besides a brand new light rail station linking the district to the city center, a new commercial complex has sprouted up with boutiques and bookstores as well as trendy restaurants and bars.

Chinese slop houses now compete with South Korean and Japanese eateries, American fast food chains and European coffee shops and pizzerias. But for many of the students it is the nightlife at the techno bars and discos that is the top attraction.

"Everyone parties at Wudaokou, it is the most happening place in all Beijing," said Kim Chul-Sang, a South Korean student at the languages university.

"Every weekend, this is a crazy place. I go there with my friends to eat and drink and take a break from my studies."

With so many hangouts in the district, one of the only eye-catching common denominators is the lack of Chinese students in each establishment.

"The most popular bar for me is Lush, that's where most of the European and Americans like to go," said a Russian foreign student who only wanted to identify herself by her Chinese name Hu Yihua.

"Generally, the Japanese and Korean students hang out more at Propaganda, but it is never certain."

Many of the shops, bars and restaurants front the new Huaqing Jiayuan apartment blocks which have become home to many of the wealthier foreign students who prefer to live in apartments off campus.

The student influx has made the complex a cross between an American college campus dormitory and a yuppie Chinese apartment block, where elderly Chinese play with their grandchildren while students stretched out on the lawn try to study.

Outside the compound at night, Chinese cabbies line up for fares and vendors hawk barbecued meats in front of bars and cafes with names like Cafe Francaise, Bicycle Bar and Rock Bar.

Barber shops in neighboring back alleys offer the traditional sex services for both Chinese and foreign students.

"To be honest with you, I think a lot of these guys come here only for the drinking and the sex," said Brian Jones, an American from Boston now teaching English at the languages university.

"There are a lot of students, many who have girlfriends or boyfriends back home, who are doing things here that they wouldn't normally be doing at home."

While students from around the world like to party, Chinese students, who have gone through a strenous exam process to get to university, are far and few between when it comes to the weekend binge drinking.

"Chinese students are very hard-working and study earnestly, but if they want to go out and drink in the bars, that is fine too, but they also must think of their studies," said Xie Xin, an administrator at Beijing University's international students office.

"If the foreign students like to drink beer, then that's fine, we don't mind that, but they shouldn't force these things on Chinese students."

The vices of drugs, drink and sex have become an issue with university administrators and are dealt with harshly when uncovered, Beida's Xie said.

"We are trying to get students to remain committed to their studies, but every year we have some problems with the foreign students who don't get used to life in China or Beida," Xie said.

"Of course if we have students that are troublesome, then we will expel them, it doesn't matter if they are Chinese or foreign."