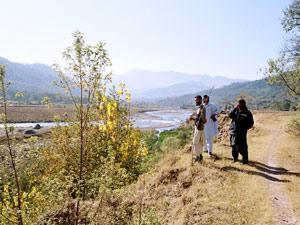 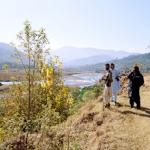 Earthquake has devastated much of what we call Azad Kashmir. Relief work is everywhere. People are either handing over aid or receiving it. Over the next few days my photography assignment will take me to one of the most splendid places on earth - and the bloodiest.

Leaving aside my post-earthquake coverage for a while I decide to visit LOC (Line of Control). For this end I take numerous advices from various Kashmiris whom I meet in Rawalpindi and beyond. One Kashmiri asks me to visit his village. He tells me it is at LOC. I am impressed. I tell him that I will visit the area - God Willing. And I leave Rawalpindi for Rawlakot. But I don't stop here because I meet yet another Kashmiri, who works at a hotel in Islamabad. He tells me that Khaingala would make a better destination for me. And he tells me that there is a lake nearby which I can visit.

So I change my plans and stop at Khaingala, a dusty town 30 minutes drive from Rawlakot. The place looks pretty ordinary. But what strikes me is that there is almost no damage done to it. Whereas Rawlakot, which is its immediate neighbour, has been flattened by the earthquake. It will take atleast 5 years to rebuild it.

A thorough gentleman, Afzal, leads me inside a small shop of his friend, which sells film rolls. He wants me to help him with his movie camera. I tell him I cannot. And then I ask him whether it is possible for me to visit LOC with my cameras in hand. He cautions me but also informs that after the earthquake situation has changed. His friend looks worried at this prospect. We drop the plan for a while and visit Banjoosa, a small town which borders LOC. It has a wonderful lake and a few ducks that are roaming around.

I return to Khaingala later that evening and take up the issue of visiting LOC immediately. I am guided by Nasir, a very handsome man with brown hairs and twinkling eyes. He tells me that his hotel is empty due to winter and that if I want I can stay. I agree. I will visit LOC the next day.

Already, before dawn strikes Khaingala my trip to LOC has been arranged by Nasir. He gives me the address of his cousin, Kashan Masud, head of NSF in Ajeera, and asks me to visit his home directly. I am surprised with this turn of events. I don't carry my personal diary and maps with me for fear of being branded as an Indian agent by our ISI brothers.

It is early morning, just after sunrise, when I checkout. The streets are empty. Few people, wrapped head to toe in their thick shawls wait for the wagon patiently. The first wagon for Ajeera, my next destination, will come soon. Or so I am told. To ward off the bitter winds that are caressing my skin I drink tea, eat biscuits and talk to the owner of a local bakery shop. The temperature was -2°C last night. Information such as this makes my bone chill. A whiff of breeze passes by. I feel good. But when will the wait end. Finally, it does. The ride to Ajeera is not long. It hardly takes 30 minutes in our wagon; by personal car it might have taken 15.

During what India calls 'cross-border terrorism' visiting Ajeera would have been considered a suicide for a casual visitor like me (though I am a freelance photojournalist). It used to be full with all sorts of murky people belonging to one of the twelve Intelligence agencies that operate in Pakistan. (This information was dished out to me by an unsuspecting Intelligence gatherer for ISI somewhere in Interior Sind).

Ajeera is a typical Kashmiri town with curvy roads that criss-cross each other in a fairly strange manner. There is nothing romantic about the landscape: most of the forest has been pulled down by the locals due to non-availability of cheap Sui gas (gas is available in containers, which makes it expensive here - another grievance Kashmiris have against Pakistani government). But people look easy going and are genuinely concerned for the welfare of visitors.

To my utter surprise Kashan is still in his bed. I ask his relative to wake him up. Soon we are chatting away. Then I am led to a table where breakfast has been laid out. I protest so does Waqar, my partner, but to no avail. After eating we leave hurriedly. And I am instructed not to brandish my camera near LOC by Kashan. Though there are now too many foreign aid agencies across much of Azad Kashmir, LOC is yet to see the tourists. So I keep my camera shut and eyes open.

The road from Ajeera onwards to Teetri Noot 'border', as locals like to call it, is not in prime condition. Kashan informs me that Pak army has deliberately kept it that way for the fear of Indian army barging in! I am disgusted by the development work here in a province that Mr. Jinnah once called 'Jugular vein of Pakistan'. No government has helped this part of Pakistan with up-beat schools. Mobile facilities just arrived after the Oct 8 earthquake. Kashmir very much fits that stereotype of our servant's beautiful daughter; one who is charming but poor.

Some 6 km and many lectures later I find myself in front of a stunning river called Pooch durya. Its waters are crystal clear and one can see the pebbles in them. But I can't spot the fish. Such water is hard to imagine in my home town Karachi. Most Pakistanis have never drunk that clear water in their entire lives. At least, I am luckier than most.

As we near LOC I can hear my heart beat faster and faster. With shaky pair of hands I remove the lens cover on my Nikon and prepare to take photographs. But before that Kashan turns around nervously to look around for any intelligence man or an odd Khaki wardi wala. None is to be found so we settle in a boat that carries us across the river.

On the mountain that half belongs to India I spot few huts. They are probably homes. I ask Kashan for details and he informs that they belong to Pakistani side. Then he points in the direction of a forest and says 'there's India'. And I am surprised that there is no fence running across. Fences are placed higher on the mountains.

We walk hurriedly to the isolated Mazar of a local Saint. With almost no breath now I pray and take a few shots. I am not sure about the photograph quality. And then I turn to view India. Few steps more and I will be in India. But it isn't that easy. Land mines have been planted somewhere nearby, I am informed. But where are they? Kashan has no answer. With my nerves jacking up I finally hand over movie camera to Waqar. He is from ARY but is not making any official documentary for the channel.

I am told that there is an Indian soldier moving around. I freeze. And then, with a small luck I am able to capture him on my film. But why is he alone, I wonder. It's probably the first time I have filmed an Indian soldier. The real one, that is. It's a remarkable achievement for me. Later, in Karachi, I would stun people with these 'secret' LOC shots.

We cross the river with the same boat. But before that we interview two young men on their feelings about LOC. One of them tells me, quite angrily, that all this LOC opening is a drama. He also tells me that all this hulla gulla over the opening of five points at LOC will not help Kashmiris much. They want freedom. We move on shaking our heads.

Across the river we meet a good looking Kashmiri girl. She tells me that since last one and half years Indian shelling is over, which has made the area peaceful. "Earlier" she told me "her younger brother Shakeel was badly injured by Indian shelling". Many of her relatives have died in the past due to incessant shelling. With time running critically short we move on. Our next destination on LOC is a place whose name escapes me. It is further 4 km ahead.

Now, the sun is almost glaring at us. We finally reach a home of an ex-army man, now a landmine victim, who was helped by NFS. He was visibly depressed by the lack of attention he was getting from army, which he had served for 22 years. "They didn't provide me with any help" he told me. He later showed us his blown foot. He has three daughters and is visibly shaky about their future. We leave with a sad note.

This short trip, though a fascinating one for me, also brings in sharp focus the plight of poor Kashmiris who are being used by canny politicians. Everyone including Mr. Musharraf and Mr. Qazi is selling his own twisted version of 'the future of Kashmir', but no one really cares about the feelings of people who've been wronged for almost six decades. Line of Blood, as one Kashmiri termed LOC, is indeed a political and a social anomaly. And instead of continuing with this horrible sequence, day after day, year after year, Pakistani and Indian politicians need to seriously address the Kashmiri grievances. Otherwise, no solution, however workable according to the so-called experts, will tick. People who have suffered the most for no fault of their own should finally be given a right which belongs to them. We must not try to supersede their sentiments for the sake of table talks and 'ground realities' as Mr. Musharraf terms them. We must hope that one fine day LOC will become a peaceful place and will not remain 'Line of Blood' anymore - INSHALLAH.

NOTE: This feature was published by Friday Times (Lahore) on 2nd June, 2006 with photographs by the author.

Theater of War Every Evening at the Pakistan-India Border