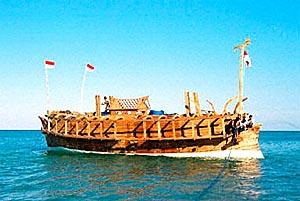 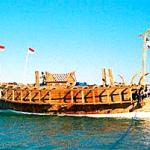 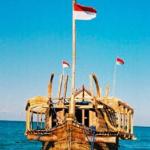 Briton Philip Beale has breathed life into stone -- using a ninth century temple carving to build a replica of an Indonesian ship which will retrace an ancient trade route of the first millennium. The ship will set sail next month for Africa, more than 20 years after his dream was born.

Beale, now 42, was strolling around the giant Buddhist temple of Borobudur in Central Java in 1982 when he "stumbled across the relief of a ship and at that point, something clicked". There were six depictions of large sailing ships, equipped with outriggers and with two or three masts. Beale decided to build a replica of the vessels that sailed vast distances across the Indian Ocean in the first millennium.

His dream began to become reality when he met marine archeologist Nick Burningham, a fellow Briton who shared his passion for ancient craft. They began building a Borobudur ship based on the temple relief.

Burningham said the Borobudur ships were local in origin since they had "a whole range of features only found in Indonesia". These included triangular masts, distinctive hulls and short outriggers that were not there to provide balance but to give rowers additional space. The men researched and designed a model and hired Saad Abdullah, 69, a traditional shipbuilder from Kangean island off the coast of East Java, to build the replica. It took a team of 26 people in Kangean almost six months to construct the 18.3-meter-long (60.4-foot) wood and bamboo ship, without using a single nail.

Burningham, who designed and made the model, had previously designed four replicas of ancient ships, including the 16th century Dutch ship "Duyfkens" that was the first vessel recorded as visiting Australia. Designing the Borobudur ship, Burningham said, was "one of the greatest challenges I have faced". He had no blueprint and no similar ships are still in existence. He determined the load and volume factors and considered the limitations of materials available at the time to arrive at the final dimensions.

"Saad not only built from the model but he also interpreted the model," Burningham said. The Indonesian boatbuilder helped to turn "such a strange-looking ship" into a "lioness with a certain majesty about her". Juanda, a retired navy officer turned maritime expert, said cultural influences were transmitted from Indonesia to Africa by mariners and traders who sailed the Indian Ocean during the seventh and eighth centuries.

Beale, who formerly served in the Royal Navy, said the ships on the temple's walls reflected the power of ancient Indonesians' maritime skills and their incredible achievements in world trade.

For Culture and Tourism Minister I Gede Ardika they prove "that in the eighth century, our ancestors were already practising globalisation" with their ocean-crossing voyages. Ardika said the ship project was an important reminder to Indonesians: "Do not forget that two-third of the country consists of sea."

Indonesia is the world's largest archipelagic state with over 17,000 islands and was the seat of successive great maritime regional kingdoms until the advent of Western colonial powers in the 16th century. "For hundreds of years Indonesians were known as superior seafarers, traders and yes, also pirates...but Indonesia has since been undergoing a steady decline as a maritime power," Juanda said.

The Borobudur expedition, that will see the ship sail from Jakarta to Ghana, will be launched by President Megawati Sukarnoputri on August 15, 2003. Captained by an Indonesian navy captain and with Beale as the expedition leader, the ship is expected to reach the Maldives in September and transit Madagascar and Cape Town before reaching Ghana in December 2003.