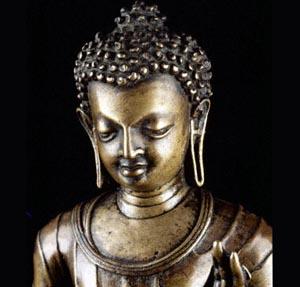 Photo of a rare 7th century Buddha Sakyamuni statue which has been acquired jointly by the British Museum and the Victoria and Albert Museum in London. 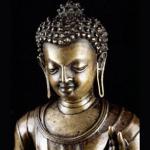 London, March 26, 2004 - A rare 7th-century Buddha statue went on display in Britain on Friday, the first time such an ornament had entered a public European collection, after a pioneering acquisition by two leading British museums.

The statue of a standing figure of the Buddha Sakyamuni has been acquired by London's Victoria and Albert (V and A) Museum and the British Museum for 850,000 pounds (1.27 million euros, 1.55 million dollars) with help from private donors.

"This is a rare and beautiful object which adds immeasurably to our Indian collections," V and A director Mark Jones said.

"It is wonderful that the opportunity to buy this statue has arisen and that by joining with the British Museum, and with the help of generous donors, we are together to put it on public display," he added.

The Buddha was to be displayed at the V and A for three months before appearing at the British Museum and a number of other museums across the country.

It was then to be shown alternately at the V and A and British Museum.

The gold-toned figure, made of copper alloy and measuring 14 inches (35.56 centimetres) high, depicts the Buddha in the style of the late Gupta period in India in the late 6th and early 7th century.

"It shares a number of distinctive features with other Buddhas of the period," the museums said in a joint statement.

"The historical Buddha is represented standing in a slightly flexed pose, with his right hand raised in the gesture of benevolent reassurance, reaffirming the Buddha's role as protector of devotees," they added.