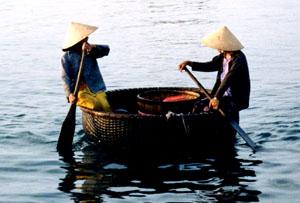 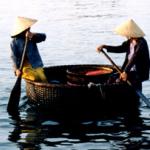 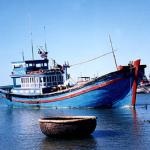 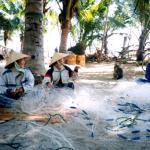 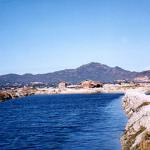 They caught my attention returning from the Central Highlands city of Dalat.

"What are those?" I enquired of the strange landscape to the side of the road.

"They're shrimp farms" answered my guide. He then added, " I have some friends who live on one of them, maybe we should visit?"

We were motorbiking through the little known and little frequented Cam Ranh Bay. For many, it was just a stepping stone en-route to the beach resort of Nha Trang - our final destination. Having just clocked up several hours travelling and hot and tired from our journey, we decided not to stop. But the young man - a resident of Nha Trang City - vowed to bring me back sometime.

Keeping to his promise, we returned again a few days later to the beautiful Cam Ranh Bay. Armed with backpacks on the same motorbike, we decided to chance it and call in unannounced to his friends.

I knew that we had arrived back in the same area again, when we drove past the same stretches of shrimp pools and the sweeping azure bay dotted with colourful fishing boats. Veering suddenly off the main road, we turned rally-drivers and negotiated the dusty, pot-holed track that lead down to the coast and the small fishing community. Small thatched houses and casuarina trees lined the route as well as the usual hotchpotch of toddlers, chickens and wobbly bicycles.

Totally unannounced, we swept into a grand one-storey residence near to the bay, complete with large front yard. A handful of women wearing the ubitiquos conical hats sat under shady trees darning piles of fishing nets. Taking up most of the yard, we practically ran over them as we pulled up at the steps to the house. The owners - the friends of my guide - had prospered well from the local fishing and shrimp farming. Sitting aimlessly on the verandah after the mornings' catch, the extended family looked surprised to see us but upon our arrival greeted us warmly.

After consuming fruit and coconut juice and catching up on news with the family, it was time for a stroll down towards the bay. We stumbled along elevated pathways that circumnavigated rows of identical shrimp pools and the odd bamboo huts. The land was salty and stony and was used for little else but shrimp farming. I did however discover later that the area also doubled up as the communal bathroom.

The voluptuous wife of the master of the house, whom I will refer to as Madam, seemed to run the show. When we enquired if we could possibly stay the night after driving all the way from Nha Trang, she quickly replied that all her rooms were occupied. This was disappointing. She then had an idea. They owned a large shrimp pool, backing on to the grounds of their home. Increasing shrimp thieving under the cloak of darkness had become a big problem in these parts. Tonight it was her turn for nighttime guard duty, so she suggested that we all camp out overnight in the little shack at the top of the pool to keep watch.

Always one to try something new and ever the adventurer, I embraced the idea and got quite excited. Besides, this would make great copy. Its not every day you get to camp out on a shrimp farm.

My enthusiasm sharply waned however when this idea was put into practice. The shack was open plan with only two walls, giving the term air-conditioning a whole new meaning. Although sultry hot during the day, at night the air was decidedly chilly. Madam sat sprawled in a deckchair facing the pool and fell asleep promptly. My guide hung out on a hammock that had seen better days. I was given the honour of sleeping on the only bed, albeit planks of wood on bricks. However, I did have a mosquito net; an invaluable item as we were not only in the tropics but also near stagnant water with no protection. I didn't share the same fate of dozing off quickly and spent an uncomfortable night tossing and turning. Madam was not much of a guardsperson snoring away, but I suspected that she always had one ear cocked up. The next morning the shrimps might still have been intact, but the three of us looked decidedly worse for wear as we stumbled back to the house.

Being friends with a fisherman's family does have its perks, however. The master of the house owned a fishing trawler and saw me as a highly lucrative business investment. Thinking I was made of dollars, he suggested I take the boat out for the day. The price bartered down was fairly reasonable - $25 USD for its' sole use, complete with Captain and mate; food and drink was extra.

It was up to me to plan the day's routes, but this was fairly easy in Cam Ranh Bay, full of isolated islands and stunning coves with enticing crystal clear water. So mid-morning, armed with French baguettes, bananas and the local "Dragon Fruit" thanh long, we first had to walk across mudflats to get to our thung chai. This was a 2m-wide precarious basket boat made of woven strips of bamboo and pitch, the only way to access the trawler.

Its' navigation required great skill; four of us had to stand in equal symmetry whilst paddling out to sea. One wrong move and the whole thing could turn upside down. At last we reached our boat - a pretty wooden trawler painted bright blue and red. My Captain for the day was the fisherman's elder son, painfully young and - I naively assumed - frightfully inexperienced. However, this is the land of fishermen and he proved himself pretty adept at steering a boat through the swells of Cam Ranh Bay.

We sailed from pristine coves to secluded islands on the most sparkling of days. Hardly touched upon in the guidebooks, there was not a tourist to be seen - only fishing boats and a few frigates from the surrounding military base. The Captain and his mate boiled up some mandatory rice, while we busied ourselves with swimming to shore and walking along silky-soft white sand. It was a perfect day and as I sat up in the cramped upper helm with the three young men, the power almost went to my head. I was Queen for the day and just for once in my life felt like the idle rich. After all that excitement, I was ready for a good nights' sleep. We understandably gave nighttime guard duty a miss: I wisely opted instead for the comfort of my firm mattress and artificial air-conditioning of my hotel back in Nha Trang.