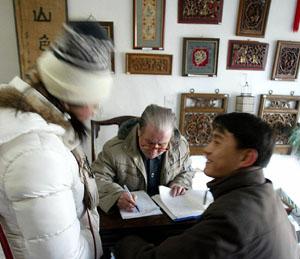 A young man and his girlfriend hover impatiently as an elderly man scribbles on a sheet of paper -- awaiting not a fortune, but a new name, at a licensed shop located near a Beijing Buddhist temple.<b 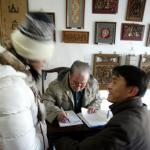 The atmosphere inside the Chinese fortune-teller's shop was tense. A young man and his two female friends hovered impatiently as an elderly man scribbled on a sheet of paper -- awaiting not a fortune, but a new name.

The 21-year-old man is encountering problems in his just-opened interior re-modelling business. He is eager to change his name, and along with it his luck. "My parents named me Tiezheng. It's not bad. It means strong, but I feel changing a name can bring a turnaround in life. It could help me avoid calamity and bring about better opportunities," said Li Tiezheng.

His new name? Hexuan -- harmonious and lofty. The fortune-teller came up with it after taking into consideration Li's birth date and time, astrological principles and the array of five elements -- metal, wood, water, fire and earth -- which the Chinese believe need to be balanced for a smooth life.

By looking in a book, fortune-tellers calculate which of the five elements clients belong to based on their birth date and time. If they are strong in wood, for example, it is auspicious for them to have a name with Chinese characters representing earth. Not long ago, this practice rooted in traditional Chinese culture was condemned as superstitious quackery, but over the past few years, fortune-tellers have been once again setting up their stacks of books and charts.

"This is based on the people's needs. What we do doesn't harm the government at all ... It's like a consultancy service," said fortune-teller Zhang Fengming, whose licensed shop is located near a Buddhist temple in Beijing. Such establishments have mushroomed in recent years with the rebirth of China's traditional yearning for spiritual reassurance.

Competition for jobs and other opportunities has become more intense as China makes the transition from a planned economy to a market economy and the pressure to succeed is spurring people, even young adults, to seek guidance from fortune tellers.

A new name can cost from 68 yuan (8.2 dollars) to 2,000 yuan (241 dollars), and some fortune-tellers even charge by the minute. "Most of our customers are parents who want us to give their newborn baby a good name," said Zhang, who also sells cloth diapers.

But customers also include adults like Li who want a lucky name for success in life. Others are movie stars and even government officials.

Chinese people have always placed great importance in names. In pre-communist days, people were given a different name for different periods in their life. During the Cultural Revolution (1966-1976), however, parents hoping to shelter their children from political problems gave them patriotic names. Boys were often named "Weidong" (Protecting East), and girls "Weihong" (Protecting Red).

"Many people now want to change their Cultural Revolution-period names like 'Shang Dong' (Towards the East)," said fortune-teller Wang Yixu. "This market is huge. There are a lot of adults who come to change their name or their business's name." In a two-hour period, four customers came into Zhang's shop. Other fortune-tellers said they were too busy to be interviewed.

But China's government, while not banning such businesses, is not exactly embracing them. It is rare to find a fortune-teller's shop on a major street or to see them advertised. "This changing-name business is very popular with people, but it's not necessarily accepted by the authorities," said Zhang's colleague, surnamed Zhou.

Li, the 21-year-old, was not worried about being called superstitious, despite the government propaganda machine's frequent calls for the public to trust science rather than seers.

"Hexuan (harmonious and lofty)," he repeated out loud. "It sounds good." He said he will use his new name in business dealings and with friends.

"It is really a kind of spiritual relief," Li said.

However changing one's name in official records is another matter. A young Beijing man, named "Quake" because he was born around the time of an earthquake, said he gave up trying to change his name when he realized the amount of paperwork involved. "It's too much trouble," he said.