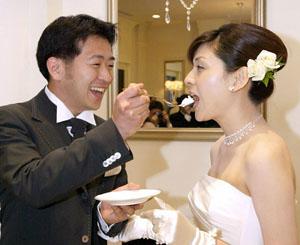 Yuichi Nakasho feeding a piece of cake to his bride, Yuko Sasakawa, during their wedding reception at a wedding hall in Tokyo. 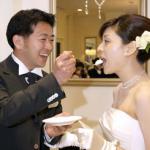 Immaculately dressed in a black tuxedo and bow tie, Yuichi Nakasho and Yuko Sasagawa, his bride in a picture-perfect gown radiate joy: their union has just been blessed by a bespectacled "priest", who, despite his vestments looks more like an American student.

Christian wedding ceremonies, even those conducted by sham priests, are increasingly the norm in largely agnostic Japan, where they are considered more modern, relaxed and romantic than the austere, traditional Shinto rites. Before the event, Nakasha and Sasagawa were not bothered whether or not their priest was in fact ordained since the ceremony in itself was not their main focus. "If we had thought about our parents, we would have had a Japanese style ceremony but we are young, we wanted a more casual style," said Yuko, 30, who added that it was only during the ceremony "that I realised it was important".

The slickly rehearsed ceremony only took 20 minutes including one hymn sung by a choir, the entrance of the bride and groom, a reading from the Bible, an address by the "priest", blessing, exchange of rings and the signing of the register.

According to XY Zekushi, a wedding magazine, Christian-style weddings accounted for 60 percent of all marriages celebrated in Japan in 2002, and 67 percent of those that took place in Tokyo.

Self-evidently, the bride and groom are rarely believers since practising Christians account for less than one percent of the population. Most of the other weddings are either Shinto ceremonies or "freestyle" without any religious element, an increasingly popular choice. With an estimated annual turnover of 1.5 trillion yen (12.5 billion dollars), Japan's wedding industry is huge, and hosting ceremonies and receptions is such an important part of most major hotels' business that many have their own "chapel". "In 2001, there were 800,000 weddings. It was the record highest number of weddings in 24 years," said Yoshitaka Nojiri, president of Take and Give Needs Co. Ltd., which offers less formal wedding packages than the hotels.

"Until 2008 this market will be expanding because the generation of second baby-boomers is now between 28 and 30 years of age," Nojiri said. Set up in 1998, and looking to expand into China in 2004, the company organises about 300 weddings a year based on an all-in-one ceremony and reception formula in Hollywood-style mansions complete with pool for throwing guests into, for about four million yen.

It is the bride who usually insists on a Western-style wedding according to Nojiri. "They are chasing a long cherished dream. They see European and American movies and see people having beautiful parties for their weddings," he said. "Young Japanese girls like to dress up and play at being a princess. Their wedding is the only occasion to turn that wish into reality," added Nojiri's assistant Fumino Kashiki.

Not everyone who opts for a Christian ceremony does so for such superficial reasons, however, insists Jean-Pierre Matata, a Catholic priest whose church is in Tokyo's Setagaya ward (borough). "It's not just for the trappings, it's something deeper than that. When they ask for a Catholic blessing, they come for the atmosphere of prayer because in Japan, even though most people are not particularly religious, they like to visit temples," he said. For the young couples who are beginning a new life, "a priest's blessing is necessary", Matata said.

After a period of some confusion, the Episcopal Conference of Japan clarified the position of the Catholic Church in 1975. Priests may perform a wedding blessing for non-Catholics on condition that they take part in discussions on topics including relationships and having children for between three and five months. "In the weddings held in hotels, there are many people impersonating priests and pastors who are employed by agencies with names like "Bridal Wedding something or other", and they conduct the marriage without the couple knowing that they are not ordained," Matata said.

Shun Matsumi, head of research at the Japan Baptist Convention, which accounts for around 70 percent of all Protestants in Japan, also criticises this practice but said he understood why some pastors take part in ceremonies in unconsecrated "chapels". "In Japan local churches are very small and pastors' salaries are also very small. So some pastors need to earn a bit of extra money. We can't forbid it although I do not like it," he said.

Shigeo Morita established his company Christ Corp. 13 years ago. He specialises in staging Evangelical Protestant wedding ceremonies for between 50,000 and 65,000 yen. Even if he is making money from it, Morita, who is not ordained himself, says his aim is to "let Christianity penetrate the life, culture and customs of Japanese people." Morita usually gives the couple he is marrying a Bible to keep, but said the hotels where three-quarters of the 230 weddings a year he conducts are held, do not let him offer advice or explain Christianity to the bride and groom.