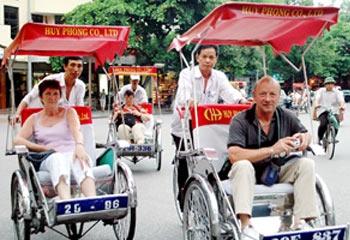 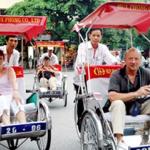 Cyclos have become not only an inextricable part of Hanoi’s culture but also one of its “tourist attractions” for foreign visitors to the city.

First appearing in Vietnam in the 1940s when the country was under the French colonialist rule, cyclos were primarily used by senior French officials to show their status symbol of luxury and wealth.

During wartime, the humble cyclo became an indispensable means of transport to help bring injured people to clinics for emergence treatment as well as food, weapon and ammunition to the front line.

Things have changed a lot since Vietnam regained its independence. Some cyclos are redesigned to become more solid for a heavy load.They are capable of carrying up to 500 kilos.

In the new context of international integration, the cyclo reclaims its fascinating role as the Vietnamese “pedicab taxi” to meet the growing demand of foreign tourists.

Why do tourists prefer cyclos?

Hanoi has been recognised by UNESCO as a city for peace but it is not very friendly to road users. Only a few foreigners dare cross the road or ride on the back of a “xe om” (motorbike taxi) at rush hour.

So, the cyclo turns out to be an ideal solution for them to enjoy a relaxing ride around town. Modern cyclos, with golden parasols and drivers who radiate professional pride, are particularly popular with foreign tourists.

Matty, a UK student at Hanoi University, said that he will never forget the feeling when he first boarded a cyclo.

“The cyclo seemed to overturn when I got on,” he said. “The driver was too small to keep his vehicle upright”.

“Life is slower and quieter when you are sitting on it,” said Theresa Nguyen, a Danish girl of Vietnamese origin.

For older Vietnamese people and foreigners staying long in Vietnam, the sight of old cyclos moving slowly in the streets is comfortingly familiar.

Most of Hanoi’s cyclos are found in the Hanoi Old Quarter, where foreign tourists gravitate. But their customers are not restricted to tourists – cyclos often feature prominently in wedding celebrations, and even locals can enjoy the novelty of a stress-free trip.

A cyclo ride tour around the Sword-Returned (Hoan Kiem) Lake costs around VND50,000-100,000 depending on one’s bargaining panache.

Touring the city on a weekend afternoon, you can see dozens of cyclo drivers and their beautifully decorated “taxis” waiting for customers on one side of the Opera House.

Due to the Hanoi administration’s decision to tighten inspections of the city’s cyclo operations, almost all drivers are now working for a company.

Lam, a sixty-year-old driver, said life has become harder for him.
“No company wants to hire me”, he said. “They think that I am too old to work”.

Tran, a cyclo driver from the suburban district of Thanh Tri claimed to have done the job for over ten years.

“Everyday I make five or six trips around the lake or in side the Old Quarter,” he said. “It is hard work but gives me a fixed income to support my family”.