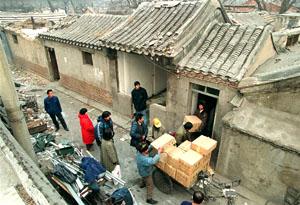 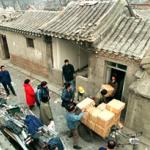 In a controversial cultural preservation campaign that has residents howling, the Beijing government is planning to tear down shabby traditional homes in the Chinese capital's historic district and replace them with modernized high-rent courtyard houses. The project, entitled "The Protection Plan of 25 Beijing Historic and Cultural Protected Districts" is centered on demolishing "old dilapidated and dangerous homes" and replacing them with "modern homes with the traditional courtyard architecture."

"This plan will raise the cultural demeanor of Beijing as a historic capital, push forward new construction in the old district and display to the world the traditional architecture of the Chinese people," the government says of the plan. Local residents, however, are aghast at the project that has also drawn concern from the United Nations Education, Science and Cultural Organization (UNESCO).

A pilot project to destroy some 900 homes in the Nanchizi district, including 173 privately-owned homes, next to the historic Forbidden City was announced in January 2001, but due to widespread opposition the wrecking ball did not begin swinging until last month. "We weren't asked if we wanted to move, or if we wanted to sell our home, we are being forced out," Xie Yuchun, a disgruntled private owner, told AFP.

"This is all a real estate scam, they say our house is too old and falling apart, but they won't let us fix it up ourselves because they want the land." Xie and his family, including two 80-year-old grandparents, have lived in a 150 square meter (1,650 square feet) courtyard home on Nanchizi since 1947 when his father bought the property.

Nanchizi residents have beseiged the city's eastern district government with petitions to halt the project, but to no avail, with city arbitrators all siding with the government. Countless hutong (or alley) homes in Beijing's center have already been destroyed as the city widens roads to make room for cars and developers seek to cash in on a booming property market that many believe has already reached bubble-bursting proportions.

The government also has an eye on the image it wants to project to the world when it hosts the Olympics in 2008. The city has already widened several main roads that criss-cross the heart of the old city center, turning what used to be quaint tree-lined residential areas into 150 meter-wide (495 feet) grand boulevards lined with high rent shops and largely empty apartment and office complexes. "I call it the destruction of the four Ms," said Ed Lanfranco, a 10-year Beijing resident who writes a column on the city's history in the Beijing Weekend and is compiling a book on the destruction.

"Beijing was first destroyed by the Mongol invasion (1264), then the Mings (Ming Dynasty 1368-1644), next Mao Zedong ripped down the city walls (1950s) and now money is destroying old Beijing," he said. Nanchizi is designated by the state as a "historic and cultural preservation area" and is considered by UNESCO as a buffer zone to the Forbidden City where emperors of the Mongol, Ming and Qing Dynasties lived, and which is now a World Heritage Site.

In February, UNESCO raised concerns over the destruction of Nanchizi with the Beijing government, but the city has not formally responded with the destruction continuing. "Nanchizi is not actually a part of the Forbidden City World Heritage Site, but it is near the buffer zone so we think it is important to raise our concerns," a Beijing-based UNESCO official told AFP.

"I have lived all my life in this historic area," said Shen Guizhi, an elderly woman in her 60s. "This area is next to the dragon throne, the feng shui (traditional Chinese geomancy) is perfect, no one wants to move out of here."

Besides the Nanchizi pilot project, the formal destruction plan also began late last month and calls for the tearing down of 1,617 hutong homes in a 4.5 square kilometer (1.8 square mile) area in the Sanyanjing district just north of Nanchizi. Xie, 56 and retired, said the government was offering him about 1.5 million yuan (180,000 dollars) for his family's 153 square meter (1,650 square feet) Nanchizi private home. People living in publicy-owned houses in the area were getting much less. "They said they would welcome me back to live in the district in one of the new homes, which I could buy at a discount for 3.1 million yuan," Xie said. "I don't have that kind of money."