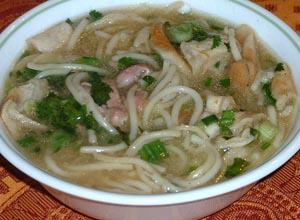 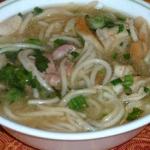 On the second day that we were in Xi'an, the city that gave birth to China, we decided to try the epitome of the city's renowned cuisine. Now seated in the Great Opera Theatre, we anxiously waited for our meal to begin. Soon our waiter was bringing in dish after dish of steamed jiaozis (dumplings) in all shapes and forms, served from bamboo trays. It was a gourmet parade - a fine introduction to the Xi'an kitchen.

Situated strategically at the crossroads of the routes crossing China and Central Asia, the city of Xi'an, during the Classical Period and the Middle Ages, grew into one of the most sophisticated and wealthiest urban centres in the world. In those centuries, it was also the first Chinese city to open its doors to the outside world. It established itself as a world leader in culture and trade and became the first stop on the famous Silk Road, playing a vital role in bridging the gap between East and West.

From here, caravans began their journeys westward, then returned bringing back with them the products and new ideas from India, Persia, the Arab world and beyond. It also became the home of traders from all over the civilized world who brought with them the Buddhist, Christian and Muslim religions and the food of their homelands. Through the years, much of the culinary delights of Asia and the Middle East was incorporated into the Xi'an kitchen, creating a unique and tasty cuisine.

Xi'an reached the peak of its culture and power during the Tang Dynasty (618 - 907A.D) when the city became the centre of the known world. The Silk Road activities and the creation of what was to become a renowned cuisine, along with the famous Terra Cotta clay army created by one of China's most renowned emperors, Qin Shi Huang, believing that it would protect him for eternity, has made the city a tourist destination par excellence.

The caravan trade gave birth to the city's Muslim Quarter located in the heart of the city. Adding an element of architectural diversity to the town's structures, it has become the core of Xi'an's outstanding foods. The some 30,000 mostly Muslim inhabitants of the Quarter, said to be descendants of 8th century Arab soldiers, create an exotic combination of China and the Middle East.

At the heart of this ancient section of the city, surrounded by well-preserved medieval walls, is the Daqinzhan Si (Great Mosque), the largest and oldest of the 10 mosques in the city. First built in 742 A.D., it is a superb example of Sino-Arab architecture and its minaret, in the shape of an octagonal pagoda, overlooks the old houses of the Quarter. The only mosque open to foreigners, it edges narrow Middle Eastern type streets and is surrounded by a combination of Arab and old Chinese type buildings.

Around the mosque and beyond wonderful local Muslim food is offered in hundreds of eating places - from street food stalls to fine restaurants. There are few other spots in the city that can match the few hundred metres street, stretching from the Drum Tower. Called the 'Food Street of the City', it is edged by pastries and nut shops, overwhelmed by countless eating places. At night, temporary small food stands line both sides of the street, defusing the delicious aroma of barbecuing Kaoyangrou (lamb or mutton on skewers) and steaming dumpling dishes. It is an exciting event for travellers to sample the culinary delights offered by these stalls in this romantic and historic part of Xi'an.

The city has a long history of specializing in the dishes of northwest China - foods that have been influenced by the Hui (Chinese Muslims). At the top of these are the city's specialities, Yangrou Paomo (steamed bun soaking in mutton soup) and innumerable types of Jiaozis. Wheat noodles and steamed bread are more popular than rice while lamb and mutton are the preferred meats. Most eating places serve hefty portions and prices for all foods are very reasonable.

There are numerous restaurants in the Quarter usually patronized by visitors, such as the high class Xi'an Restaurant, noted for its royal court-style recipes. The person waiting on the costumer usually relates a story or an anecdote related to each dish served. The other two restaurants frequented by tourists are the Tongshengxiang, noted for its mutton soup, and Defachiang, known for its Shark's Fin Jiaozis, where the food is even better and more reasonably priced

As we relished our seemingly never-ending Jiaozis, I could not believe the variety served - 16 types are usually offered as appetizers with a meal but, at times, 800 are served at a feast. All were delicious, delicate and inviting in appearance. They came in countless shapes such as avocados, chicken, cauliflowers, crabs, ducks and endless other versions with each form reflecting the filling. My favourite were those shaped like walnuts. To me, they were more tasty than the real nut.

The Jiaozis were still coming when a show, which out to be fantastic, began. The food had been heavenly, but what followed was a real competition. The stunning costumes, music, songs and dances of the performers, reflected those of the Tang Dynasty that are said to be the best in China. To me, they seemed to be the most delightful in the world. I was overwhelmed by their beauty, delicacy and splendor of performance. I can honestly say that the show was the icing that topped our superb dinner.

To try and convey some of the excellence of Xi'an foods that I enjoyed, I have changed to my own taste and simplified, to some extent, a number of the following dishes that I thoroughly enjoyed during my sojourn.