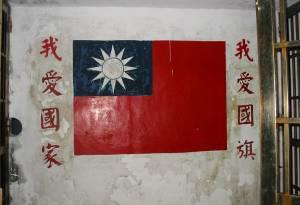 Freshly painted on the wall of Green island's abandoned political prison. The characters read "I love my country - I love my flag" 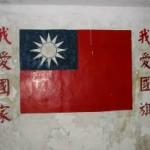 Part One - The journey begins with a sickening lurch

It's a stormy Thursday afternoon on the open sea between Green Island and Taiwan, and I'm begging for the sweet release of death. My knuckles are bled white from thirty minutes of gripping the top of the sink, and my face is pressed against the cool metal of the toilet stall wall. 24 hours into my long-postponed week long trip to some of the beauty spots of Isle Formosa, and I'm having fun. Except for the boat ride, which has me envying the dead. There is nothing to do about seasickness. The next twenty minutes will just have to be ridden out. In between heaves, I mentally collect my notes. How did I get here?

All journeys start with a first step, and this one was no different. On a map, the distance between Taipei and Taitung is not that great, roughly half the distance between New York City and Rochester. But that's a straight shot, one turnoff at Albany and the rest is cruise control. The east coast highway is a different matter, stretching like a 300 mile-long frantic python as it twists the length of Taiwan its rugged beauty. This is a road for people with strong stomachs, people in no particular hurry. But I'd already put off this trip for weeks, and had editors on both sides of the Pacific sending me pointed love notes inquiring as to when their travel copy would come through. The drought that had gripped Taiwan for months, bathing the island in glorious river-bed cracking sunshine seemed finally to be losing its grip, and the long awaited plum rains were set to blow in any day. With planes less than twice the cost of trains in Taiwan, I could afford to fly. Later in the trip, when the Yuan crunch came, I'd be hitchhiking.

The clear skies ended somewhere over the Tropic of Cancer, and by the time the plane landed in Taitung, it was drizzling. I hopped a bus out to Fukang, only to find out that the last ferry to Green Island had been cancelled due to "potentially bad weather." The woman selling tickets at the pier was very helpful, though. "If you hurry back to the airport, you can catch the last plane to the island." I hopped a cab and headed back to the airport, catching my plane, a twin prop Dornier 228 with a capacity of 18 and an engine that sounded like a blender filled with walnuts, with mere seconds to spare.

As we flew eastward, the skies cleared and Green Island materialized, a volcanic coral emerald in a blue ocean. The pilot landed the plane with a scary finesse, setting her into a dive above the tarmac, pulling up just in time to miss grazing the fence with its landing gear, landing with a controlled stop right at the control tower. I silently thanked Kuanyin (goddess of mercy, who has her own cave on the Island) and headed off the plane.

New arrivals to Green Island come in two types - convicts (there are still two functioning prisons on the Island) and tourists. The absence of leg irons marked me as a member of the latter group to the one remaining tout hanging out at the airport, an old woman who offered to bring me to a cheap hotel where I could rent a motorcycle. But my Chinese teacher in Taipei had been good enough to phone ahead to Mr. Wong, an Ami tribesman who ran a guest house, and he had already made a room up for me. Meeting me at the airport, Mr. Wong took me back to his place, where I stowed my stuff before renting a scooter. Unlike other spots in Taiwan where rental agencies have been burned by tourists running up traffic fines, renting a bike on Green Island is no problem. With only no traffic lights and bountiful parking, getting a ticket on Green Island would be difficult. Still, Mr. Wong showed a sensible concern about his scooter.

"Ride slow." he told me "These roads twist very steeply, and besides, there's so much to look at." I promised him I would handle his bike with kid gloves, but discarded the ill-fitting helmet as soon as I'd pulled out of sight.

Green island is aptly named. Except for the sandy beaches, everything on the island is covered with a thick blanket of plant life. Even the strangely named Green Island Lodge, the infamous, now defunct political prison is being engulfed by vines, its once fearsome walls now little more than a home for moss and a monument to fascism. Most visitors will at the least stop outside its walls and pause to reflect on how much life in Taiwan has changed since the days before democracy took hold, days when failure to toe the party line could land one an extended stay within. Travelers with a morbid fascination for history, can make their way inside the prison walls by any number of means. While the abandoned prison is not open to the public, getting inside isn't too difficult for those with adventurous souls.

A sensible aversion to self-incrimination prohibits me from writing any more on the subject. Suffice to say, derelict houses of oppression have some powerfully bad feng-shui, especially when the sun is nearly gone and the ghostly voices of dead prisoners start calling to you from their now-open cells.

Fleeing the abandoned prison as the last trails of sunlight dipped below the horizon, I rode slowly, watching the wind blow ripples across the water, stopping once to climb up one of the many mossy volcanic rock formations that sit along the beach for a smoke. The main road in Green Island winds its way around the perimeter of the island, 16 kilometers of postcard-perfect costal road that makes getting lost impossible. The closest thing to a main town is on the north end of the Island, close to both the airstrip and the ferry. I stopped here and break bread with some heavily tattooed ex-convicts who run a grocery store.

Not bread, literally, more like hunks of raw fish with hot sauce, cut straight from some monster of the deep that one of them had caught that afternoon. When I asked them if they were originally from Green Island, they all laughed. "No, When my sentence was up, I decided to stay here and open a store." One of them told me, pointing out that it was cheaper to live here, the weather was better than Taipei's, and that he wanted to be able to visit his friends on a regular basis.

Stomach full, I headed down along the darkened seaside road on Mr. Wong's scooter for another 15 minutes until the sounds of bad Mandarin pop music drowned out my engine. The Chaojih springs are in interesting novelty, being one of only three saltwater hot springs on the planet. The facility is divided into two sections, the "natural" springs located next to the beach - three sandy bottomed circular pools of varying temperatures and one larger enclosed lagoon where the hot springs mix with the sea water, and the "spa," a more built up area with fancy-looking faux marble pools and closer proximity to the snack bar and annoying pop music. Each area requires separate admission of NT$150 (NT$120 for students) and as there was nobody in the spa area, and the beach area was crowded, I figured that was the place to be.

To a hot spring aficionado such as myself, seawater hot springs are a bit strange. I like total immersion, and the superheated seawater felt like a nest of red ants on my just-shaved face. Still, it was a good experience, soaking in hot ocean water looking up at the stars, and conversing with the young thugs in training who'd come over from Taitung on the boat I'd missed. They played an impromptu game with each other, which involved throwing one of their pack into the hottest pool then circling the perimeter, refusing to let him climb out. They were impressed that I could speak Chinese, and kept inviting me to go out drinking with them later, an invitation which I had to decline "for health reasons". I think they were sober at the time; I didn't need to see them drunk.

Green Island is a quiet place at night, and when I got back into town, the only things open were a few noodle shops, some fried food stands, and a fruit stall. I stopped at a noodle shop and ordered the "deer-meat noodle soup," a local specialty. Small herds of wild deer once roamed Green Island, and are now bred solely for meat and tourism value. It was pretty much like beef, only gamier and bonier. After the meal, I rode back to my hotel, where, unable to sleep, I watched cable TV until four AM.

Waking up at the crack of nine, I set out to Nanliao Harbor to plan the next leg of my journey. I had heard conflicting stories about whether or not I could hop a boat directly from Green Island to Orchid Island, my next intended destination, or whether I'd have to first head back into Taitung. There are a few private companies selling tickets, which looked like a promising time until I asked any of the about schedules.

"There are boats to Orchid Island, but not from here, and not today. You have to go back to Taitung and catch one tomorrow." Said one.

"There was a boat to Orchid Island today, but you missed it. You can catch one from here tomorrow" said another.

"There are no boats to Orchid Island, ever. You have to catch a plane from Taitung" said a third.

Perhaps, as the crusty New England saying goes, you can't get there from here. I bought a ticket for the 2:30 back to Taitung and went back to town for some breakfast and watched the early morning snorkelers come in from the Tapaisha diving area down the road.

"How was the diving?" I asked one of them. "Fabulous!" He answered "Better than Boracay."

I rode around the island once more, did some hiking around Fanchuan cape, and headed back to the guest house to collect my stuff. Mr. Wong drove me back to the harbor, where I caught the ferry back to Taitung. It began raining almost as the ferry pulled out of Nanliao, and soon the wind picked up. The tiny ship began rocking side to side, bobbing up and down and up and?.ulp!

And this, dear reader, is where you came in.

Continued in Part Two, Lost In Taitung County, in which our narrator visits a place where the laws of nature are defied and winds up with rats in his hair.