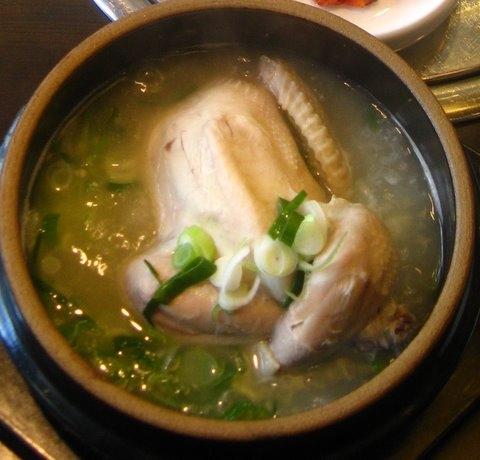 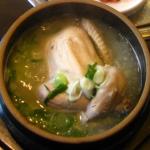 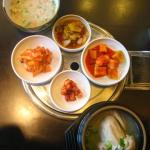 Ah, samgyetang, known outside the Korean peninsula as "chicken ginseng soup." A soup in name only, the hearty samgyetang is no thin pre-meal consommé but a feast in and of itself - especially when the numerous banchan (side dishes, including, of course, kimchi) are taken into account.

A tonic for the health in both warm and cold weather (though to Koreans, more so in the former) and a mental stimulant, this amazing dish is also said to provide a libidinous boost for fun in the boudoir (or the nearest convenient facsimile thereof, usually rented in three hour blocks over in Seoul's Shincheon district).

It's also a fine hangover cure, if that's where your travels have taken you.

But what's in this magic dish? Chicken, obviously, but not just any chicken; Samgyetang calls for a whole chicken, and a young one at that, ideally just big enough to feed one. The chicken is then stuffed with glutinous rice before being boiled in a broth of ginseng (Korean ginseng, naturally; none of that Wisconsin stuff here,) garlic, ginger, and dried seeded jujube fruits.  Other medicinal herbs may find their way into the pot as well, including wolfberry (gugija in Korean) or Angelica sinensis (danggwi).

Specialty restaurants serving samgyetang abound in Korea, most boasting their own samgyetang recipe, usually originating from the chef's hometown. You'll find a few of these in Insadong, Seoul's main tourist district. Most good Korean restaurants outside of Korea will serve the dish, though sometimes (owing likely to the time involved in preparing real samgyetang) these will be pale imitations of the real thing - a chicken leg instead of a whole young chicken, that sort of thing.

Many Asian supermarkets sell pre-made samgyetang in convenient pouches (ah, heat n' eat technology,) and these are often pretty close to the real thing; you'll have to provide your own banchan and insamju (ginseng wine). Of course, you can always make the dish on your own;  Su over at IKoreanfood.blogspot has a fine recipe for the dish (using a Cornish game hen, often easier to get at your typical American supermarket than a small chicken). You can check that out at  The Korean Food Blog.

It ain't Hollywood, but North Korean cinema only has room for one s...