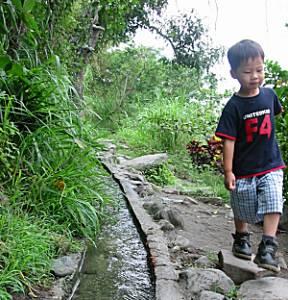 A young boy demonstrates the miracle of "Water Running Up" 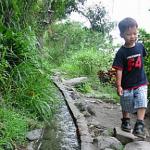 Finding myself once more on solid ground, I made my way to the grocery store by the dock, grabbed two boxes of iced tea and squeezed the first out over my open mouth like a lemon. The shop owner had seen this reaction many times before.

"Rough trip over." He said, matter-of-factly, and I nodded out "uh-huh" between gulps.

"The Green Island trip is rough on a stormy day like this, but you ought to try the ferry to Orchid Island. That's really bad."

"Yeah, there's a ferry leaving tomorrow. I can sell you a ticket if you want."

So you could get there from here. But not me?had the editor of National Geographic rung me up that very minute and offered me a shot at a cover story, an unlimited tab, and the services of a beautiful Swedish photographer who would also give me an oil rubdown on the other side, I couldn't have made myself get on that ferry, not tomorrow, maybe not ever.

"No, I think I'll see Orchid Island another time" I told him, inhaling the contents of the second box.

After a while, I felt well enough to haul my bag out onto the front road, past the semi-larcenous taxi drivers who called to me "Taitung? 200 dolla!" I got to the road and stuck out my thumb, and within a few minutes, I was riding shotgun in a jeep driven by Mr Wu, a Taitung native sporting a thin Sun Yat-sen mustache.

"Smart of you to hitchhike" he said "Those taxis are no good. Too expensive. You really should rent a motorcycle.

As it turned out, Mr. Wu was in the motorcycle rental business. I soon found myself in his shop in Taitung city, checking out a fair variety of 150cc scooters. The rental process took all of three minutes, and cost NT$300; Mr. Wu didn't even ask to see my passport, let alone my drivers license. "Have fun, call me if you need any help" he yelled after me as I rode away on a Green 150 CC Honda.

I was tempted to go out to the Jerban hot springs, a resort about 15K into the mountains, but last night's lack of sleep was starting to creep up on me, and I decided to start looking for accommodations for the evening. I headed over to Gringos, a fairly well known Taitung Hostel under joint western/ Taiwanese management, and a place that catered specifically to students, travel writers, and other people of limited means.

As luck would have it, Pete, a friend of a friend from Taipei who had invited me out to his place for surfing lessons on the weekend was there checking his email before heading off to his evening teaching job. We arranged to meet the next evening, and decided to turn in early in order to get an early start exploring the mountains and coast north of the city. Gringos turned out to be a good little place to spend the night - nothing fancy, but since I wound up spending most of the evening unconscious, I didn't mind.

The next day was overcast, one of those days where you felt like it could have started raining at any moment. I packed my stuff on the scooter, and in what was for me a moment of unusual foresight, bought a 25NT disposable rain jacket before heading out. Route 11, the coastal road, is probably one of the most beautiful roads in Taiwan, and around Taitung, it doesn't really matter which direction you head. Heading south, the road goes to Kenting, and heading north, to Hualien and beyond. Either way, you're faced with the prospect of mountains towering off to one side and an endless ocean on the other. I could have just flipped a coin, but the clouds seemed to be darker to the south, so I went north, watching the wind turn the blue ocean into choppy shreds.

At Shan Yuan beach, I stopped to stretch my legs. Just a handful of people were availing themselves of the beaches amenities, which including rental wave runners (500 NT for 15 minutes) and some very cool looking floating trampolines. But the day was young, I'd forgotten to bring a towel, and I hated the idea of riding through the mountains with wet shorts. Instead, I had an early lunch of bread and fish at a little restaurant on a hill overlooking the beach before heading on.

Further up the road, I came upon a strange road sign - "Water running up" - with an arrow pointing west. Interest piqued, I turned off the main highway and ran smack into one of Taiwan's oddest roadside attractions; a small stream that ran up a hill, effectively defying gravity. Puzzled, I bought a fried oyster cake and a coconut and attempted to get information from some local merchants.

"We don't know what causes the water to run up, but it always has" a woman selling coconuts told me "it's a mystery."

"Have you considered calling up the creators of the X-files and asking them to come do a show about it?" I asked.

"I've heard of that show, but we don't have cable TV." She answered.

I followed the stream up the small hill, every so often dipping my hand in to confirm that the water was indeed still running upwards, then headed back down again and got back on my bike, eager to return to lands where the basic laws of nature were not so lightly flaunted.

At around two, the sun finally came out, and I headed off the coastal road and onto route 23 into the mountains. This area of Taitung County is populated largely by native tribes people, and most of the people I spoke to told me that they were from the Ami tribe. History tells us that the aboriginal population of Taiwan got a raw deal. Pushed from the fertile plains into the hills by the Hakkas, then pushed from the hills into the mountains when the Han from Fukkien pushed the Hakkas into the hills, most of the native population of Taiwan now live on the far eastern edge of the island. Still, it's hard to deny that the Amis of Taitung County have wound up living in pretty sweet surroundings. The are is beautiful, lush, sweeping valleys filled with rice paddies and fruit trees. If not for its inaccessibility, the Hans might have pushed the natives all the way into the ocean, and the area might look like a hilly Kaoshuing.

My original intention was to circle around on route 23 and hit another road that led back through the mountains to Taitung. However, ominous clouds began moving in from over the mountains. I stopped at a small store in a ten-building town.

"Does this road lead to Taitung?" I asked the proprietor, an elderly man who was sitting with a dog that didn't look much younger.

"Don't know." He answered in choppy mandarin. "I've never taken it that far."

Not wanting to chance getting caught in some god-awful flash flood on some strange mountain road, I decided to head back to familiar ground. In any event, the afternoon was getting on, and I needed to meet up with Pete. Our plan was to have supper in town and head home to hit the sack early and wake up at dawn to scope the conditions. By the time we finally met up, it was getting dark, and Pete had other ideas.

"Dude, just got word that some wave action is happening. If we hurry, we can catch a few minutes of surf before it gets totally dark."

"But it almost is totally?" I began to say, but before I could finish the thought, Pete was already on his Sanyang 125 (with a special side-mounted board carrier, naturally).

By the time we got back to his house on the beach, dusk was on its last legs, and night was calling the shots.

"Still some light," Pete said, and ran towards the beach with his long board. "Gotta catch those waves when you can."

I followed, and watched Pete disappear into an endless azure sea that stretched out beneath the darkening sky. The sounds of the waves crashing into the rocky beach were fantastic, a deep, rolling crackle that ebbed and flowed. After a few minutes, it was too dark for even a hardcore surfer.

We went out and had some dumplings at a local shop, then headed back to his beachfront home, a small, one story brick house with a red tiled roof that looked like it had withstood many a typhoon. Pete cracked a beer, and I inquired about the scuffling sounds coming from the next room.

"Oh, yeah. I have a rat problem in the house." Pete told me "It's pretty bad, actually. I'm thinking of getting a cat."

"Do they ever bother you?" I asked.

"Only when I'm asleep" He answered.

The rest of the evening was spent in pleasant conversation as we discussed music and the ways of the ocean until we turned in. It was in all respects a perfect night.

Until One AM, when I was woken up by a high pitched shrieking - my own. I bolted upright, hands flailing instinctively in panic as I slapped at a rat that had gotten tangled in my hair and was now squeaking wildly in my ear. My palm hit something warm and hairy, and the rat slapped against the floor and went skittering out of the room.

I switched on the light and sat frozen, knees drawn into chest, staring straight ahead, hyperventilating.

"Dude, I'm sorry" called a sleepy voice from the next room "I've really got to get a cat."

After about 20 minutes, my heart rate had slowed enough to allow me to think clearly. I recalled a picnic table I'd seen on an enclosed patio overlooking the beach a few kilometers down the road, and decided that it would be a fine place to spend the remainder of the night.

Continued in Part Three, Surfing Taiwan or Not, in which our narrator fails to surf and takes in some light night life before heading north.