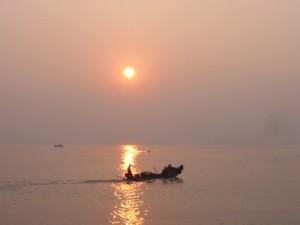 Dawn off the coast of Hualien 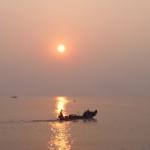 Haunted by the sphinx-like mystery of my driver's daughter's final riddle - "erriva, erriva" - I got out of their car by the "Cave of the Eight Immortals". It was 4:30, which left me a half an hour to climb up and pay my respect to the various Buddha statues that now occupy the many caves that dot this hillside overlooking the Pacific. According to the literature at the site, the caves are the site of the oldest culture living in Taiwan, a long gone group of semi-prehistoric folk that called these parts home, long before the Hakka, Han, and perhaps even the current tribes of Taiwan. Thirty minutes is not enough time to hike to the top and back; it was enough time to hike up to some of the lower caves and take some pictures of the Buddha statues that were put there by the post prehistoric management.

I got back to the road and stuck my thumb out, and within moments, found myself settling in for the long ride to Hualien with Mr. and Mrs. Yeh, an Ami couple who took turns driving, chewing betel nut, and looking out on the side of the road for snail-picking opportunities. People more fitting of the title "Salt of the earth" would be hard to find, and they went out of their way to drive me into the city before heading to their home in the suburbs. I figured that I'd have a meal by the train station, then start looking for a cheap hotel and a motorcycle rental shop. Finding the first was no problem; the neighborhood surrounding the Hualien train station is awash with hotels in the NT$500 range. But many of these places had a distinctly unwholesome air about them, as if to advertise that an evening's respite was not all that could be had. With some, it was a subtle signal?the way the woman at the counter was reluctant to give me a straight answer when I inquired about the price. With others, signs were clearer - several scantily clad women smoking cigarettes in the lobby giggling at me as I peered into the front door. Being a wholesome lad, I decided that perhaps another night on the beach was in order, and for that I would need to rent a scooter.

It was there that I ran into a different problem entirely. Unlike the other places I'd been, renting a motorcycle in Hualien without a local license seemed impossible. "Sorry," One scooter shop owner told me "We'd like to rent you a scooter, but there are too many hidden traffic cameras all over Hualien, and if we get a NT$1200 ticket on our bike, we can't track you down to pay it."

That such officious regulations should exist in the gateway to a top tourist spot would surprise me, but not in Taiwan, where the tourist industry is treated like a red-headed step-child by the powers that be. Luckily, I was able to use my wiles as a journalist (and the reputation of a local newspaper) to score myself a 50cc scooter. Soon, I was on my way, fleeing the sordidness of central Hualien and heading towards the ocean, like Lot escaping from Sodom and Gomorrah, except that Hualien wasn't destroyed by a vengeful god, and nobody I knew got turned into a pillar of salt.

I rode north up the coast in the cool night air, my scooter's headlight the only light to be seen outside of the moon, the stars, and the occasional passing car. I rode for about thirty minutes, and turned off onto a service road that led me to a rocky beach, where I unrolled my sleeping bag and stared up at the stars until my eyes closed.

I was awaken by the sounds of heavy machinery moving towards me. It was just before dawn. Apparently that the beach on which I'd chosen to sleep on was used as a parking lot by local fisherman, and about twenty yards away, some sort of modified tractor was lifting a small fishing boat into the water in preparation for the morning haul. This subtle signal from the gods told me that it was a good time to get up. I packed up my gear, took a few pictures of the red sun setting the ocean aglow, and set out inland, towards the mountains and towards Taroko Gorge.

I didn't have far to go, as it turned out, having unknowingly camped out just a few minutes away from the delta where the Liwu river which runs through (and millennia ago, carved out) Taroko Gorge meets the sea. I followed the road by the river, stopped for some breakfast in a small village at the mouth of the park, and soon found myself in Taroko Gorge, the most oft-recommended tourist destination in Taiwan; a small spot on the global tourist map, but without a doubt among the world's most beautiful places.

Well fed and 50cc engine humming perfectly, I headed West on the Central Cross-Island Highway. A miracle of engineering, the highway is carved from sheer cliffs, offering breathtaking views of mountains and heart stopping glimpses into the long freefall and subsequent rocky death that awaited me in the chasm below should I somehow be pitched over the guardrail.

Stopping at The Eternal Spring Shrine, I hiked up to the Kuanyin Cave and, as is the custom, had a smoke to commemorate the 212 workers who died building the highway. From the shrine, I rode to the Chankuang Temple, a four-story Zen Buddhist monastery which offers amazing views of the mountains, and hiked across the suspension bridge up to the bell tower. There were some monks there, and one of them was also smoking, so I lit up another one as a sacrifice to the spirits of the workers who made my journey possible. We stood together, smoking in silence.

Back on the highway, I rode up through the "Tunnel of Nine Turns Trail", a treacherous curving python of a road that worms its way through the mountains, heading west towards my ultimate goal, the Wenshan hot spring. Taiwan has the best hot springs in the world, and Wenshan is, for my money, the best of them all. It isn't just that the Wenshan, with its three pools of varying temperatures carved out of sheer rock, is one of the few totally natural hot springs left in Taiwan. And it isn't just that the hot spring water bubbles from deep within the earth into the Liwu river, forming hot pockets in the river's crystal clear, fast moving cold water, making it possible to be soaking in hot water one moment and, with a subtle movement, be thrust into bracingly cold water. What makes the Wenshan spring the finest in creation is that you can soak in the hot water and look up at the sheer cliffs towering on either side, a thin crack of blue sky above, and hear nothing but birdsongs resonating through the gorge.

Alas, such pleasures are transitory, and as the afternoon slipped away, I realized that my vacation was soon to fade into the realm of memory and travel journalism. I soon found myself riding slowly down through the gorge in a heady post-soak daze, back to Hualien, and, ultimately, back to the big smoke...Taipei.

Squeezing the last bit of life out of vacation time, I decided to spend a few more hours in the city before catching the night bus that would bring me back to Taipei. I rode over to Nanbing park, a seaside night-market with a distinctive carnival atmosphere on the eastern edge of town, and then to Guo Fu street, where I was offered a wide variety of local delicacies not easily found elsewhere. The smoked shark meat was excellent. The sea urchin I sucked live from its shell did not agree with me. After stuffing myself on Guo Fu street, I headed back to the bus station, and boarded the bus for a ride back up the east coast to Ilan.

It was then that I discovered that smoked fish, live urchin and papaya milk do not a good pre-ride snack make, especially not when the ride in question is on the Hualien - Ilan stretch of the east coast highway. Beautiful by day, all that I recall about the trip that night is being tossed around in the darkness, my center of gravity shifting every few seconds as the bus made its way up the twisted coast. After a few hours of this tilt-a-whirl ride, I switched buses in Ilan headed west through the mountains. An hour or so later, the bus dumped me out by the last subway station in Taipei. I was finally home. I'd covered a lot of ground during my trip. Now I really needed a vacation.