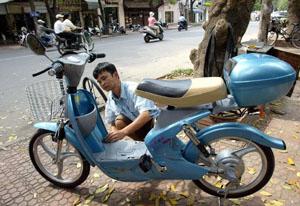 A mecanic puts the last finishing touch on a Chinese-made electric motorbike before its delivery in front of a bicycle shop in downtown Hanoi. 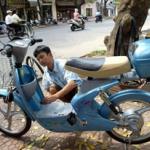 HANOI, May 14, 2003 - If it's street cred you're looking for, forget it -- stick to the Harley-Davidson. But for those wanting to do their bit for the environment and save a few pennies, an electric motorbike could be the answer.

In Vietnam at least, the once-dismissed "granny-mobiles" have become a serious alternative for millions of motorbike owners in the wake of a long overdue campaign to rein in widespread lawlessness on the roads. Decision 13, announced by the government in November, has a three-pronged strategy of reducing the escalating death toll from traffic accidents, easing congestion, and enforcing the rules of the road.

Pivotal to the campaign has been a crackdown on unregistered motorcycles and drivers without bona fide licences. Only around 3.9 million of the country's nearly 10 million motorcyclists are estimated to hold a driving licence, and even then many gain them illegally on payment of bribes.

"We have sold more than 1,000 electric bikes in the past four months," said Nguyen Bich Ngoc, owner of a small hole-in-the-wall bicycle shop in the capital. "There is a huge demand for them now because of the government's battle against pollution, traffic jams and bad driving. What's more, you don't need to register them nor do you need a licence," she added.

Electric bikes also cost far less than their petrol-guzzling cousins. A brand new Vietnamese model sells for around 325 dollars. Add on another zero for a mid-range motorbike. The cheapest Chinese electric version can be picked up for 130 dollars, a more viable option for the humble duck farmer wanting to move up in the world from push-bike status.

In the time-honoured tradition of the market economy, three Vietnamese companies -- two of them state-run -- are now pushing out electric bikes as fast as they can. Thong Nhat, a state-owned enterprise, is manufacturing 100 bikes a month compared with a previous 50 but it is still unable to meet demand. Vu Tien Hao, director of the privately-owned Delta Co. in Ho Chi Minh City, says his monthly output has increased by 50 percent since February.

Batteries, which sit neatly in a plastic pannier on the back of the bike, take four hours to charge from flat and can power a 50-kilometre (32 mile) non-stop run or about 40 kilometres if running errands around town. With the cost of charging a battery working out at less than 50 cents, running an electric bike is half the expense of a petrol bike. And even a flat battery doesn't mean a long walk. Simply start pedalling.

"It is safe, quiet, pollution-free and there are less mechanical parts to break down," said Laurie Reece-Evans, the American wife of a United Nations development expert. "If I was 20 years younger I would probably have bought a motorbike but being a mother I feel much safer on this," the 44-year-old added.

Nguyen My, general secretary of the Vietnam Bicycles and Motorbikes Association, says the sky is the limit for the electric bike in a country where car ownership is set to remain a luxury of the elite for many years to come. "This is a very new product in the Vietnamese market but I think we will see an exponential rise in sales," he said.

"One part of our population needs to buy an electric bike because it is not too expensive, it is not heavy but at the same time it is solidly built and it looks beautiful."

Others, however, aren't convinced. "I would never consider buying one because they are what middle-aged people and teenagers ride," said Luu Anh Tuan, 24-year-old dance choreographer. "How could I ever consider flirting with a girl on an electric bike?" he added.