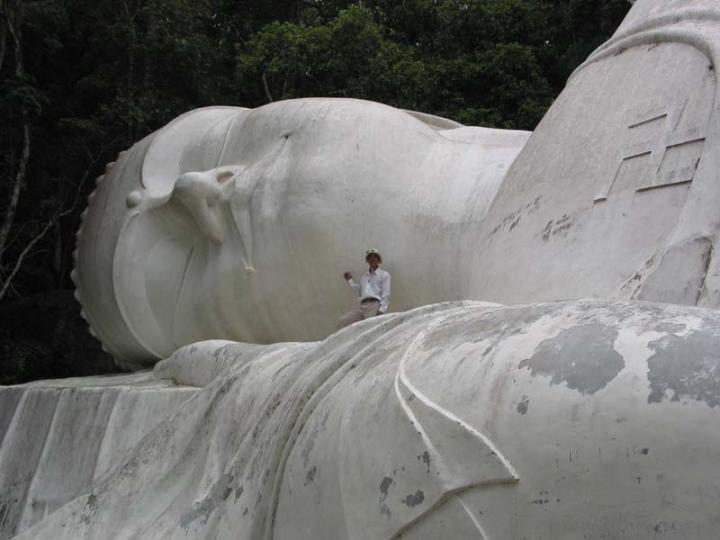 The largest reclining Buddha in Vietnam is located atop Takou Mountain. 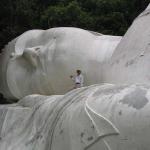 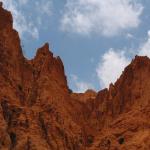 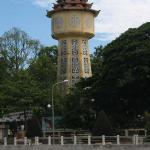 Many people know Vietnam for its bustling city streets and markets, its tropical rainforests, battle sites, and a few cultural landmarks. Few know that Vietnam has a small desert region along the southern coastline, in Binh Thuan province. The relatively few tourists who make it to this area find endless miles of empty beaches, ruins of ancient Cham towers and immense Saharan sand dunes. Boulder-strewn mountains line the Northern border of the province and tumble into the sea at Ca Na. The countryside is populated by cactus, cobras and large scorpions.

The northern half of Binh Thuan, where Kalon Song Mao Nature Reserve is located, is completely unknown to tourism and even most locals or government officials. This forgotten paradise has tropical bamboo rainforests, and rare animals like the Large-antlered Muntjac (a species unknown to science until 1994), Sun Bears and Yellow-Cheeked Crested Gibbons. It bears no resemblance to the rest of the province further south.

The provincial capitol of Phan Thiet played an important role in the country's history. Ho Chi Minh spent time teaching at a school in Phan Thiet, and the area later hosted French military outposts and an important American base and airstrip during the war. It's the world capitol of green dragon fruit, produces the most prized nuoc mam (fish sauce) and is one of the country's top producer of seafood.

Phan Thiet represents the southern arm of the Matriarchal Cham kingdom. Thap Poshanu is a group of ancient Cham towers from the 8th century. Together with a larger group of structures including an old French fort, the ruins of a French duke's villa, a modern pagoda and a poet's tomb, they form what the locals refer to as "The Prince's Castle."

The majestic blood-red sand cliffs of Ganh Son plunge into a sea of deadly quicksand. Few visit this place, despite being next to the provincial capital. The canyon has swallowed up a portion of the former American military base, and with it, land mines and unexploded ordinances.

Further south along the coast is Khe Ga lighthouse, built by the French in 1897. The structure sits on a small rocky islet and offers some of the most beautiful coastal scenery in the country.

Atop nearby Takou Mountain is a beautiful rainforest. Visitors can ride the gondola for a small fee or walk the mountain trail for free and discover the mountain-top temple and the largest reclining Buddha in Vietnam.

The White Sand Dunes to the north hide a beautiful sea of lotus. The dunes are so pristine that sea birds lay their eggs right on the sand. An ancient Cham tower once stood at the base of the dunes, offering glimpses of the sea.

The crown jewel of Binh Thuan is Mui Ne Beach; a new resort area developed after a rush of tourists came to see the full solar eclipse on October 24, 1995. Mui Ne has quickly becoming a kite boarding Mecca. The perfect weather and constant breeze makes it an ideal year-round vacation spot and water sports destination.

Mui Ne is one of the best kept secrets in Vietnam's tourism industry. It has all of the beauty and charm of the best beach destinations in the country, yet the lowest number of tourists. It also lacks the annoying street venders and the seamier sides of places like Nha Trang and Vung Tau.

Mui Ne has some of the top resorts in the country yet it is still accessible to the budget traveler. It's just $5 to reach Mui Ne by bus from Saigon, and comfortable rooms can be found for as cheap as $4 a night with some haggling. Most sites still have no entrance fee. If you are looking for something entirely unique yet affordable in Vietnam, and need a break from war monuments, hectic city streets and flocks of tourists, come visit me here in the desert of Binh Thuan.