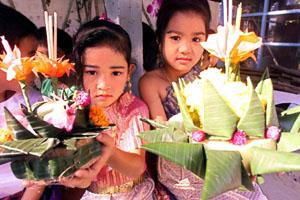 These Krathongs are released on the nearest body of water in a yearly offering to the Goddess of the water. Loy Krathong festival, Thailand. 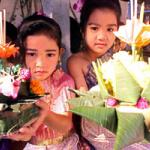 Not many countries can match Thailand in the sheer number and variety of its traditional festivals, which seem to be holding their own pretty well against the rapid development and modernization of the country. The Thai way of life has long held Westerners in thrall and the age-old Thai customs and traditional festivals are well documented by hordes of foreigners -- from backpackers to more up market travelers -- who have tramped all over the country and, in some instances, become part of the local landscape.

As a country famous for friendly people, the Thais are only too willing to talk to travelers about their way of life. Therefore, travelers who venture to different parts of the country, visiting remote villages and bigger cities will experience many festivals all year round.

The more obvious festivals such as the three main Buddhist feasts, Songkran, Loy Krathong, the well-known Rocket Festival celebrated all over the northeast, and royal anniversaries such as Chakri Day, Chulalongkorn Day, and the King's Birthday.

In addition, there are less known included sections on other Buddhist festivals such as the presentation of robes to monks at the end of the rainy season (Kathin), the Candle Procession which takes place just before the start of the three-month period of abstinence known as Pansa, and the rare Royal Barge Procession.

During most of the Buddhist festivals, Thais will throng the local Wats to perform merit-making. Although a serious atmosphere prevails within the temple, a more light-hearted atmosphere is encountered outside. The entire area surrounding larger temples will be swamped by vendors selling everything from religious items to food and trinkets. Sometimes, makeshift stages for Brahmin-like stage performances are set up as well.

There is the Ploughing Ceremony that takes place in Bangkok at the start of the rice-planting season in May at the Sanam Luang just outside the Grand Palace. This ceremony is conducted as a prayer to the gods to provide a good harvest for the coming year. As the main "rice bowl" of South East Asia, the rice growing industry is a big economic provider for the country. During the Ploughing Ceremony, Brahmin clad religious leaders will interpret omens to forecast the rice yield for the year.

Besides the more obvious ceremonies, there are also more elaborate and sometimes downright lurid festivals such as the Phi Ta Khon, a Ghost Festival that takes place only in Loei province in the northeast. Another interesting festival celebrated in the Isaan Northeastern Provinces is the Yasothon Rocket Festival. During the festival, held in May annually, beautifully crafted wooden rockets are paraded and fired into the air to ensure plentiful rains for the harvest.

However, despite the many festivities celebrated today, there are some festivals which are no longer celebrated. One of such festivals is the Elephant Round Up which was held in Surin in the northeast. This festival was celebrated during the golden reign of Ayutthaya (14th till 18th century) where large numbers of wild elephants were herded into a wooden stockade constructed from huge logs of teak. Today, a tourist version of the festival, known among locals as Chaiyaphum, is held in January in Surin. A restored version of this impressive structure stands in the northeastern outskirts of Ayutthaya.

In November every year, the Loy Krathong festival takes centre stage. Dubbed the "most romantic" festival in Thailand, Loy Krathong is celebrated all over Thailand. Loy means "to float" and krathong means "leaf cup" which is traditionally made of banana leaves, but these days most krathongs are made of Styrofoam, especially in the city. The decorated krathong have flowers, coins and a candle used as an offering to the "Mother of Waters".

The festival has its origin in Thailand where it is celebrated by the Thais on full moon night of the 12th lunar month, which is in November. Today, it is also celebrated in Laos and Myanmar. It marks the end of three months of ploughing and planting for the rice farmers. While waiting to reap the harvest they feast and celebrate. In recent years, this traditional event has acquired a religious dimension. The Thais would drift small floats, about 12cm in diameter, made from woven banana leaves onto the lake. But before this is done, they would offer a prayer to Buddha, requesting that the float takes with it all the ill-fortune suffered by the individual during the year. Several sticks of incense as well as a candle would be lighted and placed on the little float. During the November celebrations, lakes and rivers and its surroundings were well-lit by candles from the float.

Different province will have their individual versions of this Buddhist festival. For example, in the Tak Province in north Thailand, the Loy Krathong is created out of coconut shells instead of banana leaves or Styrofoam. The end result is a beautiful string of necklaces of light over the Ping River.

For those who want to see the origins of the festival, there is no better place than Sukhothai. The celebrations in the province, which lasts the entire month, usually takes place at the UNESCO designated Sukhothai Historical Park. On the full moon night itself, the park will be illuminated to provide a romantic aura for the celebrations.

The people of Chiang Mai province also celebrate Loy Krathong in a unique fashion. They have their own special name -- the Northern Lantern Festival and the Yipeng Loy Krathong festival. Besides the krathongs floating on the river, visitors to Chiang Mai will also get the chance to see floating lanterns rising up in the night sky. The launching of illuminated Lanna-style hot air balloons is an event unique to the north.

Some of the festivals mentioned is certainly worth altering your travel itinerary, but remember to book accommodation and transport in advanced. We ended up in Nakhon Si Thammarat in the middle of a huge Buddhist festival and ended up walking to three hotels before finding accommodation in a slightly dingy room! Apparently, it is even harder to find accommodation during religious festivals in the Northeast, as accommodation in the area is scarce even in non-peak seasons.

Also, since most of the religious festivals are celebrated according to the Buddhist calendar, the dates for the festival may vary. Check out the annual festival dates on the Tourism Authority of Thailand website at www.tat.or.th for more information!