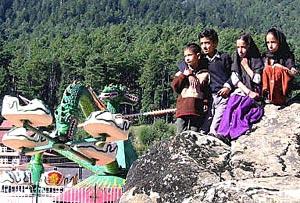 Two Kashmiri brothers and their twin sisters sit on a rock looking at rides inside Kashmir's first amusement park in Pahalgam. 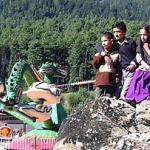 Kashmiris looking for respite from war can now enjoy the province's first amusement park, but their enthusiasm is not shared by environmentalists who say a pristine mountain resort has been spoiled. Amid the dense pine forest at the Himalayan foothills of Pahalgam, Kashmiris who want to relax with more than nature now have the choice of 10 attractions including a miniature railway, bumper cars and paddle boats shaped like ducks.

Built at a cost of 30 million rupees (661,500 dollars) by the private Jammu Kashmir Bank, the amusement park 100 kilometers (62 miles) south of the state capital Srinagar proved a hit Sunday when it was opened by the province's chief minister, Mufti Mohammad Sayeed.

Pahalgam, which means "shepherd's village," has long been a haven for outdoors enthusiasts hoping to trek, ride ponies or fish in the snow-fed Lidder river. The lush village was once a favourite backdrop for the musicals of India's Bollywood film industry. But the resort has struggled to draw tourists from outside the province since 1989, when an anti-Indian insurgency broke out that has left tens of thousands dead.

Environmentalists are up in arms about turning famed Pahalgam into a potential eyesore of development. Zulfikar Ahmed, a Kashmiri ecological activist, said the dyes from an artificial stream that runs into the amusement park's pool were running into the fast-flowing Lidder. "It (the park) is not blending with the scenic beauty of this resort. It has definitely polluted this place," Ahmed said.

"People come here to enjoy natural beauty, and not to get distracted by man-made machines," he said. "I don't know from where the idea to set up this park came," said Ahmed, who claimed that even the government-run Pahalgam Development Board was not consulted on the project.

The resort is in the state assembly constituency of Mehbooba Mufti, the daughter and top adviser to state leader Sayeed. "I have told the government that it should construct an affluent treatment plant soon in the park to deal with the waste products," S.D. Sutantra, the head of Indian Kashmir's pollution control board, told AFP. He called for more trees to be planted to make the amusement park blend in better with the surroundings.

As he spoke, a diesel-run generator roared from the park's rear.

Despite the environmentalists' concerns, the project has been embraced by ordinary Kashmiris longing for some entertainment. Islamic rebels in the course of the insurgency have shut down cinemas, theatres and even beauty parlours in the province. Adults eagerly jumped into crocodile-headed and shoe-shaped rotating chairs, as their children expressed awe at the spectacle.

"I have seen such things in Delhi and Bombay, but had never dreamt we would have them in Kashmir," said Imtiaz Ahmed, 12, of Srinagar. "I will urge my parents to bring me here at least once a month," he said.

Twin eight-year-old sisters Meena and Rubina Malik came here from the neighbouring village Khilan. "I drove a car myself, and it was great. I have never sat in a car so far," said Meena, who is from a lower-caste family.

On Sunday everyone was allowed in for the grand opening free of cost, but administrators said they would start charging 100 rupees (two dollars) for entrance.

"Most probably this is our first and last visit to the park. Our parents can't afford to buy us an entry ticket," said Riyaz Ahmed, 9, the elder brother of the twin sisters.

Critics have also questioned setting up costly equipment to protect the park from temperatures that can dip down to minus 20 Celsius (minus 4 Fahrenheit) in the winter. "We will try to build sheds around these amusement machines to protect them from snow and other adverse weather conditions," said Yusuf Khan, the chief of the Jammu Kashmir Bank.