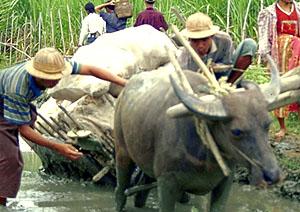 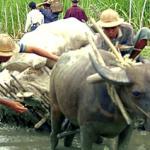 The track was well beaten. So well beaten in fact that just beyond the village boundary it became virtually impassable. Forced to continue on foot, progress involved picking a cautious path along the edge of a waterlogged trail. Already alive with the nervous twitch of mosquito larvae, deep pockets of mud that had momentarily embraced cloven hoofs now warned of the need for a considered step. And so I continued, gaze cast downward, attention focused solely on putting one foot tentatively in front of the other with the occasional sideward step and extended stride until I came face to face with the Sittaung River.

The river's impact upon me was immediate. It was impossible to move on without first allowing the eye to follow the river's course and the mind to contemplate its power. Cutting through a flat, green landscape the brown and swirling waters seemed to underline their undeniable ability to deliver mixed blessings. Along its banks a path, occasionally diverted as the river claimed another patch of ground, had been rubbed into the surface by a steady flow of villagers. Here, just below the headwaters in central Myanmar, the Sittaung River divides communities, yet also sustains them. Nets, cast hopefully into the muddied waters, pulled their catch gasping to the surface while fields of sugarcane, flourishing on the flood plains, nodded approvingly in the warm breeze. For such an isolated area it was strange to see so many people passing by and all heavily laden with supplies. At a confluence of rivers a couple of ramshackle bamboo huts masqueraded as a ferry terminal while middle-aged men lay grounded, unable or unwilling to be diverted from the seemingly demanding task of chewing the fat and sipping the local brew. At the river's edge one of three huge teak-hulled boats promised to carry me upstream while the tiny sail of another equally sturdy craft gave shape to an unseen breath of air and propelled its charge gracefully over to the far shore.

Once on board the ferry silence yielded to a violent outburst of raw energy as the diesel engine kicked in and the ferryman headed for deeper water, struggling as he did so to turn the boat in the direction of Swar Ywarma village. The approach to the village shoreline was a cautious one. Bordered by high sandy banks and a fringe of coconut palms, mud flats stretched out in a wide arc trapping fish in the shallows and threatening the boat with a similar fate.

Clambering up the steep riverbank I was greeted with a mixture of surprise and genuine curiosity. It was abundantly clear by the look on the villager's faces that it was not everyday a westerner was washed up on these shores. On a bench in front of the local store, however, U Aung Kyaing, the headman of the village, remained impassive. With well-practiced fingers he sat preparing betel nut, the contents brushed with lime and wrapped neatly in a fresh leaf. Only the occasional cursory sideways glance seemed to acknowledge my presence. I approached and in the shade cast by a roof dressed with dried teak-tree leaves seated myself opposite him. A welcome was extended in the form of a small emerald-green packet pushed into the palm of my hand. Accepting the 'local chew' drew an appreciative nod from U Aung and broad smiles from the gathering crowd.

As headman, U Aung Kyaing also carries the somewhat cumbersome title, 'President of the Peace and Development Council' (village track level), and like most others in the community he is a subsistence farmer. His meager income is generated from working an acre of sugarcane, another of pulses and two of paddy. With no ownership of farmland in private hands the right to work it has been passed down through his family and the Government continues to guarantee the crop price. Others supplement their earnings by selling goods brought in from neighbouring towns or running the ferries. During the dry season skilled hands turn to the tenacious red earth and the task of transforming it into pottery, form and function unchanged for centuries. Throughout the year fish are pulled from the river and in rag-tag gardens, neatly framed by fences of split bamboo, herbs and vegetables are ripe for the picking. Life moves forward at a leisurely pace, always a little work to be done but always time to sit and talk. Among the stilted houses and their gardens shaded by curtains of green the people's wealth is tangible, free of affectation, uncluttered by desire. If there is a threat here it comes from the river itself and the annual flood. But with homes raised above the deluge on wooden pilings and with boats hewn from local timber the community plays a waiting game - and every time they win.

From the safety of a familiar window an old man looked down on me, unimpressed but unruffled by the vulgarity of my intrusive lens. Backing away I was captured by a group of small children who tailed me with the persistence I deserved and good-humour that I welcomed. Their every joyful step was punctuated by the bouncing rhythm of the local tongue - music to my ears needing no translation. Followed to the edge of the village I stopped at the beginning of a wooden walkway that stretched across luminescent rice fields to the foot of hills flattened by clouds. There, I was told by a local healer, malaria was common and many hill people came across the boards making their way to his door seeking help. With a potent mix of ancient wisdom and modern medicine he does his best to quell their fevers.

Outside every village home water-jars sit sweating, the liquid within slowly leaching through the porous earthenware body. Evaporating on the surface, this small sacrifice ensures the liquid inside remains cool for the thirsty passerby even on the hottest of Burmese days. With my cup overflowing I took my fill and took my leave of Swar Ywarma. As the boat pulled away from the shore and cut through the restless waters of the Sittaung River I was showered with waves and smiles as a whole village stood on the riverbank and watched my departure.

Overnight heavy rains had liquefied the trace running between two fields of sugarcane and all day a bruised sky had threatened the land with a further outburst. Ahead of me and leaning dangerously over to one side, a cart pulled by two buffalo lay trapped in the mire. Encouraged by their masters, even the beast's brute strength seemed no match for the mud that had enveloped them. As the men called out the buffalo responded with a muscle burning pull accompanied by cries of exhaustion. At the peak of their pulling power the harness of one of the animals snapped and the struggle, at least for now, was over. Freed from their burden the buffalo were led down to the water's edge. The drover's wife walked them into the river cursing as she did so the unfortunate animal who had clearly been found guilty of causing the problem. Apparently aware of the scolding he had received the proud creature moved into the middle of the river and proceeded to wallow in self-pity. Affection, meanwhile, was lavished upon his partner. Washed clean of the grey mud he was allowed to rest in peace while the owners considered how to deal with the sticky task of retrieving the cart. I at least was able to walk away from it reflecting as I did so on how the river flowed through every aspect of the people's lives and how, if only for a day, it had immersed me in its wonders and carried me to the village of Swar Ywarma.