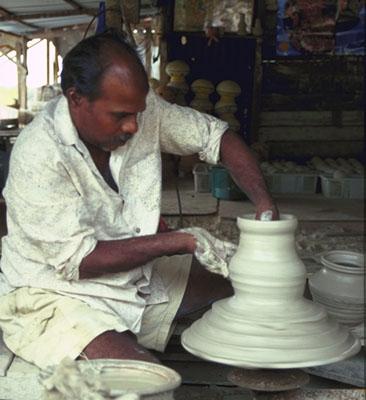 As the wheel turns, the clay seems to become liquid, flowing gracefully between Krishnan’s fingers. 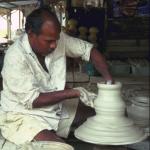 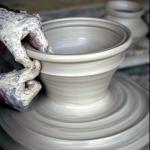 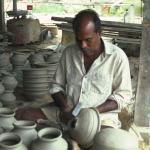 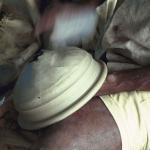 ... you must use an earthenware cooking pot made in the traditional way. Or so I am told by Krishnan, one of three Indian potters that line the road of Baru Dua, Jalan Klang.

Two hours earlier I had left the city of Kuala Lumpur where beautiful old colonial and Chinese buildings sit in the shadow of the gleaming chrome and steel of the Petronas Twin Towers - playground of Sean Connery and Catherine Zeta-Jones in the film Entrapment. Soon the sweltering city streets were replaced by the cool and shady avenues of palm oil plantations, receding into darkness as if leading off to some mysterious land inhabited by Tolkinesque characters.

Long before the palm roots had penetrated the earth of Kuala Selangor, its crust was broken by the hands of potters who had migrated from Southern India during the 1850's. Drawn to the area by an abundance of rich and sticky clay lying just beneath the surface they established studios that catered to the needs of the local community. Producing a range of items that included curry pots, rice pots and ritualistic items used for prayer, the craftsmen flourished. Today, direct descendants of the original settlers run the three remaining potteries. Yet despite their historical connections, shared interest and close proximity, there is a tangible tension between the potters. This has not come about, as one might expect because of increased competition, but more interestingly, due to a break in tradition. Not so long ago all pots produced here were made using traditional methods that had been handed down, unchanged, by generations of Indian potters.

On paying a visit to the workshop of Krishnan Kanthasamy, I found him sitting on the ground, making pots just as his grandfather would have done a century ago. The process begins at the potter's wheel. Under Krishnan's direction, the wheel turns and the once immobile lump of clay seems to become almost liquid, flowing gracefully between his fingers. It is a joy to watch as his skilled hands breathe life into the dull gray earth, demonstrating an almost unconscious understanding of the material to which his life has been devoted. Indeed, such depth of experience seems to have traveled beyond the spoken word and can only truly be articulated through actions.

In what seems a remarkably short space of time, Krishnan cuts the completed bulbous form from the slowly spinning wheel, gently lifting it like a newborn baby then carefully setting it down alongside his other creations. Little wonder that potters choose such words as ‘foot', ‘belly', ‘neck' and ‘lip' to describe elements of their work. Never has ‘body' been a more apt way of describing the clay from which these pots are born. Although the vessels that he has made clearly belong to the same family, they do bear slight differences - undoubtedly one of the pleasures of selecting and buying work that is truly handmade.

As all doctors know - and it would seem, Indian potters - the first thing that newborns need is a good slap on the bottom. As with children, so it is with pots. The traditional curry pots that Krishnan makes have a rounded base. In order to achieve this, the pots are thrown and cut from the wheel without a base. Once the clay has dried a little the vessel is turned over, rested in the potter's lap, supported with one hand from the inside and slapped rhythmically with a small wooden paddle using the other hand. This action has the effect of stretching the thick clay walls of the pot and closing them in to form a base. Although it may appear to be rather harsh treatment for such a soft and pliable material, under the guidance of expert hands the clay responds almost magically. Within a few minutes, Krishnan has formed a perfectly rounded base and so sets the pot down before selecting another one on which to perform his wizardry. It is this technique that he insists improves the quality of the curry. The theory being that he is able to get a thin and even base. This, in turn, allows for a more controlled heating of the food as the pot sits among glowing charcoal embers or on a gas flame. Judging by the excellent curries I have eaten in Malaysia there could be a grain of truth in it. Certainly, his customers seem to agree, as business is brisk.

The pots are left unglazed, with decoration limited to a quick brush application of red slip (liquid clay). Once dry, they are fired in a kiln that appears to be little more than a hastily constructed heap of common house brick. Fueled by scrap wood the firing swift.

Although most of the pots that Krishnan makes will be sold to the Indian community, one particular item has become popular among Malays. The small rounded rice pot is often used in a ceremony surrounding the birth of a Malaysian child. Following the birth, the placenta is placed in the pot, covered and sealed, then buried ceremoniously. The tradition is still widely practiced within village communities.

A stone's throw from Krishnan's studio workshop is that of Ramadas Chettiar. In 1992, Ramadas decided to modernize his workshop. First to go was the large and ungainly potter's wheel - not unlike a cartwheel with a concrete rim to aid momentum. It has long since stopped turning and now remains idle outside his workshop to remind him of the progress he has made.

Ramadas moved away from the labor-intensive thrown and paddled technique to adopt the use of a Jolley. With this method a plaster mold forms the outside shape, while a plastic profile is lowered into the turning clay to create the inside shape. No carefully guided birth here. It is quick, efficient and produces identical pots with minimum effort. Although his father, also a traditional Indian potter, was originally against such modernization, he is now convinced that it was a good move. Ramadas speaks of the desire to change not only to increase productivity but to address a more fundamental problem - an acute shortage of skilled labor (in recent years visa restrictions have been tightened and it is now almost impossible for potters to emigrate from Southern India). The problem is exacerbated by the fact that the young show very little interest in a craft that requires diligence and long-term commitment.

Clearly adept at dealing with the economic realities that life has thrown at him, Ramadas positively beams with delight as he speaks of reduced labor cost, less physical work for himself and his wife, and the fact that he has been able to raise enough cash to buy land. His philosophy is printed on his business card for all to see:

For Ramadas it is not about maintaining a tradition, or the satisfaction gained through the intimate dialogue with his materials. The pots are merely a product and the goal is increased income, security for his children and improved quality of life. Admirable and understandable aspirations and, although not entirely in agreement with the slogan, I feel that few would argue with his motives. Despite the benefits that the change has brought he is still not keen for his own offspring to enter the business, preferring that they have a university education rather than continuing the traditional way of life. For the first time members of his family will be able to make career choices not just accept a profession as their destiny.

Now a third potter along the road, Arumugan Perumal, has come to hold similar views and as a result has recently changed to more modern methods of production. His son is presently studying to be an engineer.

In spite of the developments at the other potteries Krishnan doesn't waver, remaining resolute in his commitment to the old ways.

As the afternoon rain begins to fall, three local children step deftly between upturned pots, hurrying to move them under cover. These boys spend their days helping around the workshop. Living as they do in poverty and without the prospect of a high-school education, they stand to benefit from Krishnan's patience and his craft may well be passed down to them. In time, it may even secure a future for their children.

Krishnan's nimble fingers make over a hundred curry pots a day, fulfilling orders from around the country. He also produces a range of items used in Indian temples during various festivals. One of the most popular items is a small dish-like oil lamp called kutuvillaku that is lit during daily prayers. Visit a temple at any time of day and you will witness worshipers lighting the wick of a lamp filled with ghee (clarified butter) and presenting it to a statue of a deity. The faithful then waft the flame towards themselves in a symbolic action signifying the light of God washing over them. As yet the lamp has not been reproduced by the semi-industrial methods adopted by his neighbors and even Ramadas finds himself at the wheel on some occasions in order to produce this best seller.

Just as the humble Chinese shop-house nestled among the ever-changing city manages to receive a respectful nod, so too the traditional work of the potter continues to find its place in the temples and homes of Malaysia. Oh, and apparently, it is essential if you want to cook a really good curry!