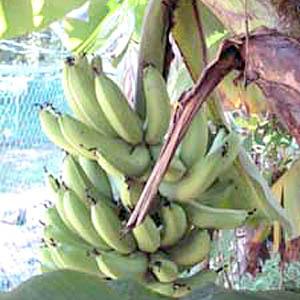 Banana Tree At the End of My Road... 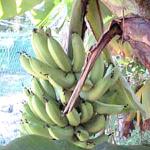 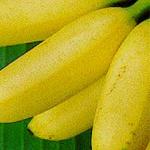 Grown in the tropical and subtropical regions of the world and available all year long, the humble banana plant is one that is highly treasured. Its distinctive flavor and nutritional value have long been known. Besides being eaten as a fruit, the banana is now used in various dishes -- from the popular pisang goreng (fried bananas) favored by Malaysians as an afternoon tea dessert to being used as a main ingredient in banana cakes and manufactured in factories into banana crisps, jam, jelly and even canned. The banana plant is a large herbaceous plant reaching to a height of about 1.5 meters till 3.0 meters when fully grown. The banana fruit is a berry and it is protected by a cover known as peel -- which is what you must feel off before biting into the delicious yellow flesh inside. The fruit is usually green when unripe and yellow when ripe. Both the stem and the in florescence are edible.

Bananas are well known for its nutrition -- high in fiber, vitamins and minerals -- as my mother would say! In Malaysia, banana is also known as "the fruit eaten by wise men". This is because for it is both cheap and full of nutrients. Research has proven that just two bananas provide enough energy for a strenuous 90-minute workout. No wonder the banana is the number one fruit with the world's leading athletes. Health practitioners have long advocated the benefits of bananas to treat various ailments. For instance, bananas can help improve anemia as it contains iron. It is also one of the few food that is high in potassium yet low in salt, making it an excellent source of potassium for people with high blood pressure.

For those with constant constipation problems, eating bananas regularly might be the perfect tonic. Since it is high in fiber, banana acts as a natural laxative to help restore normal bowel action. Those with hangovers after a night of partying have also advocated a banana milkshake as an excellent cure for the throbbing headache and queasy stomach.

And it is not only the fruit that is so useful. Various parts of the banana plant itself can also be used for different purposes. In South East Asia, the banana leaf is used to wrap food (in the place of plastic bags and cling wraps), providing a unique flavor and aroma to nasi lemak and the Indian banana leaf rice. In the Philippines, many parts of the banana plant is used to make handicraft. The leaves are also processed and its fiber used to produce a type of tough, gunny-sack type cloth. In Indonesia, the banana plant is used to make traditional medicine and as animal feed. To the Indians, the flowers from the banana tree is sacred. During religious and important ceremonies such as weddings, the banana flowers are tied around the head, for they believe this will bring good luck. Over in Thailand, children games include riding on a horse made from the stiff spine of the leaves, and the yearly Loy Krathong Festival (in November) features a small raft made of a sliced cross-section of banana stem decorated with candles, incense and flowers. This raft is then floated away in rivers and lakes.

Today, bananas are usually grown from rhizomes that are carefully transplanted. The soil must have excellent drainage or the roots of the banana tree will rot. As the plant starts to grow, new shoots will emerge. This is known as suckers. These suckers will continue to produce new plants generation after generation for several decades. In about nine months the plants reach their mature height of about 15 to 30 feet. From the stems, that are about 12 inches thick, flower shoots begin to produce bananas. Its fruit bearing process is interesting. Just before the plant bears flowers, it puts out a small flag leaf. Soon an aerial shoot grows through the hollow center of the stem and emerges as a strong thick stalk, which droops under the weight of what looks like a huge bud of purplish or bright color. The bud in fact is a series of overlapping fleshy bracts that unfold one by one to reveal a close packed cluster of tubular yellow or white flowers which soon turn into a half circle of tiny deceptive bud consists of male flowers, which naturally do not fruit.

Bananas possess a unique biological phenomenon called negative geotropism. As bananas start to develop, they grow downward. As they take in more and more sunlight, their natural growth hormones bring about a most puzzling phenomenon, and they begin to turn and grow upward. As the plant becomes heavier with maturing fruit, it must be supported with poles. Though quite large and thick, the stems are not strong and woody like most fruit trees and can break under the weight of many bunches of bananas.

Bananas begin to ripen as soon as they are harvested from the tree. Therefore, you can often see fruit sellers selling green, unripe bananas. Do not attempt to eat the bananas then, for it will still be bitter. It is only when the bananas turn yellow with some brown spots that it should be eaten.

Besides its obvious importance as a source of nutrient and in the daily activities of people living in the tropical and subtropical regions of the world, banana is also an important source of income for agricultural countries. Today, Indian remains the top producer of bananas in the world, growing approximately 20 percent of the world's bananas. Latin American countries such as Brazil, Colombia, Ecuador, Costa Rice and Mexico are the second largest producers of bananas, and the main exporters to the United States. In South East Asia, the top banana producers include Thailand, Indonesia, Philippines and Malaysia.

Despite growing less of the world's bananas, the South East Asian countries are considered the centre of origin for this humble plant. It is believed that Indian traders who go regularly to Malacca first started bringing the bananas back around 6 Century BC. In 327 BC, the humble banana captivated Alexander the Great so much that he introduced the banana to the Western World. Although bananas have been grown in China since 200 AD, it never became popular among the Chinese, who considered it an alien fruit. Eventually, the banana made its way to Africa and the Middle East and became popular throughout. Banana was first introduced to the Americans during the hundredth anniversary of the Declaration of Independence in Pennsylvania in 1876. Apparently, the bananas were wrapped in foil and instructions on how to eat the banana are included on a small paper tagged to the foil! The Americans must have literally gone bananas over the fruit, for United States is now the world's largest importer of bananas!

This region is also the centre of diversity for bananas -- with the greatest number of wild and cultivated species of bananas. Bananas that we eat belong the Musa genus (Musaceae family) of plants. The two main types of banana genera are the Ensete and Musa family. The bananas from the genus Ensete are not edible -- its fiber can be used to make cloth and it is sometimes its leaves are eaten as vegetable in some parts of Africa. Musa, the edible genus, is divided in four main groups by scientists. It is the main Musa group that gives rise to most of the edible bananas in the world. The more common varieties of edible bananas are from the Musa acuminata and Musa balbisiana groups.

In Papua New Guinea, the main type of bananas come from the Australimusa group of bananas. In most parts of India, Japan and South East Asia, the Musa is by far the main group available. However, there are different type of Musa bananas depending on the elevation it grows best in. For instance, in Borneo and Sumatra in Indonesia, there are two types of bananas: the Musa ampestris, Musa beccarii and Musa hirta grows well in the lowlands and the Musa acuminata, Musa textilis, Musa flavida, Musa halabanensis, Musa salaccensis and Musa violascens thrive in the highlands (as high as 1500 meters above sea level). Most wild bananas found in the jungles of Malaysia originate from the Musa acuminata group.