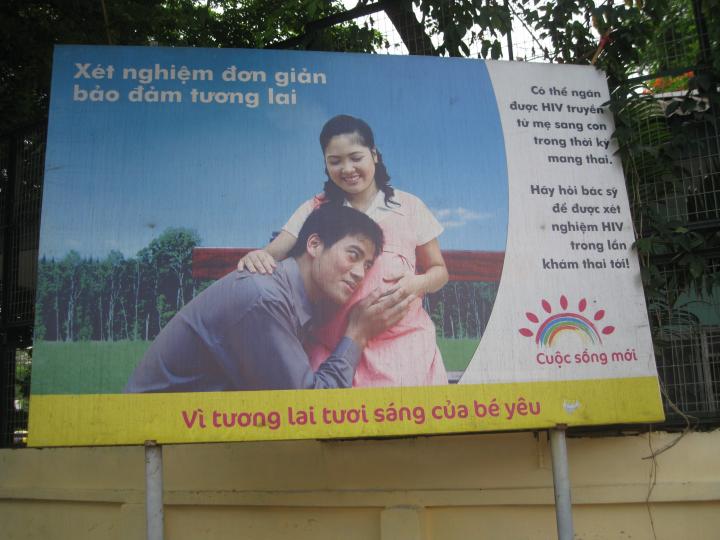 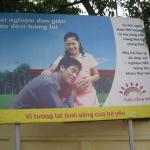 We sat uncomfortably in the waiting room of the private clinic. The Vietnamese women looked condemned: pale and impatient to get it over with. Finally the door opened.

“Yes?” said one of the older women, who happened to be blind.

The waiting room erupted in laughter, the women highly amused. Vietnamese have a no-holds-barred sense of humor that can surprise foreigners at first, and she did not have AIDS, after all.

I was the only foreigner in the women’s clinic, as well as the only man. I probably looked just as worried as the women in the empty room, without even a Cosmopolitan or National Geographic  magazine to take my mind off the impending dread. My Vietnamese wife and I were waiting for her monthly check-up. The other women sitting in the waiting room were in various states of pregnancy: lychee, guava, mango, dragonfruit, papaya, coconut, durian, watermelon, and jackfruit. It was like a tropical fruit salad.

After my wife had an ultrasound in a crowded room with 30 other women, she emerged with a printout of the results:

The baby was on its way and well.

I stared at the black and white ultrasound photo like a Rorschach test, trying to decipher it. There it was, that little black speck. It was hard to think of “it” as a boy or girl yet, but there it was, its heart beating insistently in the blurry gray void.

Becoming a father the first time is confusing to start with, but becoming a father in a completely different country is even more bewildering. Vietnam is not the easiest country for foreigners to navigate, although Hanoi is much more modern than during the war and the aftermath of Nixon’s Christmas Bombing in 1972.

I met my Vietnamese wife, Nhung, and was swept off my feet, like Robin Williams in the 1980s classic Good Morning, Vietnam. As we were still young but not getting any younger, we started “trying.”

Now that she’s pregnant, her retired parents are looking forward to taking care of a grandchild. My wife is constantly constipated from the pre-natal vitamins of folic acid and iron.

Despite the government’s two-baby rule, the Vietnamese have their fair share of babies, and this year, the Year of the Golden Dragon, should be particularly auspicious. This means the hospitals in the capital are inundated with expecting mothers. What to expect when you’re expecting? A long wait.

The pregnancy thus far revolves around food, or lack of it. Around 5:30 in the evening, my wife feels completely nauseous and cannot eat anymore.

“That makes me want to vomit!” she announced when she smelled an innocuous pea soup I was eating, running out of the room. Morning sickness seems to have created a Wonder Woman nose that can detect the slightest aromas.

Not that my wife isn’t eating. She had a ravenous hunger before we knew she was pregnant during a short trip to Thailand, wolfing down coconut curries, pad thai, and spicy tom yum goong soup as I stared on.

“Miranda says it’s not morning sickness because it’s all day long. It’s mourning sickness,” Nhung groaned, citing Sex and the City, her favorite foreign television series to practice English with. “I like Samantha, but I’m the most like Miranda,” she confided once while we were watching DVDs before the pregnancy.

She also has cravings for unusual foods. Snails, duck embryo egg, liver paste, cinnamon buns, and other foods she normally cannot stand. According to the baby books I found, she’s become a roaring ocean of hormones, most of which I can’t pronounce. Chorionic gonadotropin? Unconjugated estriol? Now that she’s beginning to “show,” I can’t always recognize her as the tiny 98-pound woman I once met.

“Last night I had a dream that you wanted to get a divorce,” she informed me one morning. “Then I said I’d kill myself if you left me.”

Yes, it’s an intense experience, but it seems to have brought us closer together.

“You eat a lot of sour foods. You must be having a girl,” decided an older aunt, who smirked at the prospect. As in many countries, boys are preferred in Vietnam, even by women. “Ten girls are not worth one testicle,” as the Vietnamese say; sons are expected to care for the aging parents and carry on the family once the parents pass away, which means caring for their parents’ well-being in the afterlife. As we sat at Aunt Nga’s house, the aunts and cousins regaled my wife with their own pregnancies. Over the weeks, the stories have continued.

“I was in the labor room with 60 other woman. All of us were screaming!” recalled Vinh, a friend who had given birth at a large government hospital. “Our families couldn’t come in with us, and a security guard kept them out. Then there were ten smaller delivery rooms next to use, but they weren’t closed off, so we could hear them screaming. It was awful!”

My wife and I were horrified by the story, but our friend from a poor province in central Vietnam shrugged it off.

“You’ll be fine,” she assured my wife.

Vietnam is a nation of strong women, and as the first trimester draws to a close, it’s reassuring to know we’re not the first couple to have a baby here, and we certainly won’t be the last. We can only wait for what the second trimester holds in store.