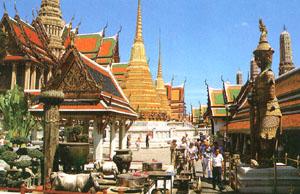 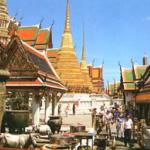 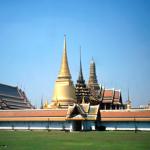 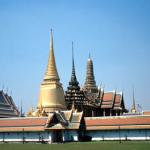 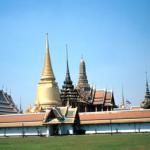 Driving through Bangkok's mind-boggling traffic with its pollution and noise, one would not dream that hidden amid this nerve-racking congestion a visitor can find some of the most attractive structures in the world. The mass of 20th century edifices and the always vehicle-clogged streets give no indication that exquisite palaces and ornate temples are to be found in their midst.

Overshadowing all these structures is the Grand Palace with its Temple of the Emerald Buddha - Bangkok's top attraction. Our first day in Bangkok, Thailand's capital of some eight million, I joined a Malaysian-Chinese tour group for a visit to this tourist mecca. It was stop and go, mostly stop, as we drove from our hotel in the early morning hours - the peak of the traffic rush.

Yet, in this city, called Krung Thep (City of Angels), it was not always so. A few decades ago, Bangkok was a serene urban centre of canals and rivers labelled "the Venice of the East". In the last quarter century, most of these waterways, under the pressure of progress and mechanization, have been turned into concrete streets to accommodate the vehicles needed to move the people and their goods to the city's ultra-modern highrise buildings. Only on the very polluted Chao Phraya River and a few canals do the hang-yaos (long-tailed gondola-like boats), for which the city was once renowned, still ply their trade.

We finally reached the Grand Palace. At the first sight of golden sparkling Phra Si Ratana Chedi I forgot the din of motor vehicles and their contamination of the air. The crush of the modern life was now in the past.

The Grand Palace compound was built in 1782 by King Rama I, the first king of the present Chakri dynasty. In the ensuing 150 years, until well into this century, it was the centre of the country's power. Surrounded by 2 km (1.2 mi) of crenellated white ramparts built in 1783, the massive complex covers an area of 218,400 sq m (261,206 sq yd). Inside the walls, the palace compound was built to house government offices - only one of which remains - royal residences, and the Royal Chapel of the Emerald Buddha.

Contemporary with the foundation of Bangkok, the palace complex, which was the setting for the story of 'Anna and the King of Siam', is the earliest major structure in the city. Today, the King does not reside in this jewel of architecture, but in a new abode a short distance away.

The first impression a visitor gets when entering the palace grounds is the richness of the artwork on every structure. The highly decorated architectural details leave one amazed at the creative skill and devotion of the artisans. They have covered with intricate work, the fantastic collection of gold domes, spires and temples. Everywhere we turned, each building was a superb example of their art.

The truly important structure in the complex is the Royal Chapel, Wat Phra Kaeo, housing the Emerald Buddha - the most sacred Buddha image in Thailand. Exquisitely carved from a block of jade, it is considered to be the protector of the kingdom and an object of national veneration. When the Chapel is open to the public, crowds come to pay respect to the memory of the Buddha whose image sits high up on an altar of gold.

The Upper Terrace has four main monuments: the dazzling golden Phra Si Ratana Chedi, enshrining a piece of the Buddha's breastbone; the repository of the canon of Buddhism; the model of Angkor Wat, a prodigious Cambodian temple; and the Royal Pantheon where statues of past sovereigns of the ruling dynasty are enshrined. Scattered around these monuments are fictitious animals in mythology. These evolved out of artists' imaginations and are valued for their aesthetic inspiration.

One should not miss the Audience Hall of Amarindra where ceremonies of the court usually took place; the Cakrabardibiman building which was the residence of three kings; the Chakri Hall, a striking example of Italian architecture surmounted by a Thai-styled roof; the Dusit Hall with an exquisite throne made from mother-of-pearl and the murals of the Ramayana, depicting good over evil.

On special occasions, the Grand Palace is the locale of important religious ceremonies usually presided over by the King or a leading member of the Royal Family. Colourful and moving, they are said to be the precious stones of the Grand Palace which, itself, is the crown jewel of Thailand.

Besides the temples in the Grand Palace, there are 400 others in the city of Bangkok alone - 30,000 in the whole country.

Some of the most important are:

Wat Pho, the home of the 36 m (118 ft) long statue of the Reclining Buddha - within walking distance of the Grand Palace;

Wat Traimit, home of the 3 m (10 ft) high solid gold statue of the Golden Buddha; and

Wat Indravihan with its huge 32 m (109 ft) high Buddha - the largest in Bangkok.