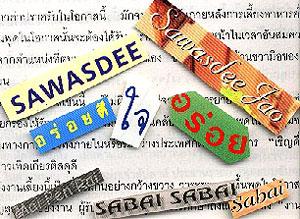 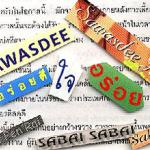 The first phrase roughly translates to "it doesn't matter", the second to "no problem." Together, they typify the Thai approach to life: don't get bogged down by small obstacles, don't worry, take it easy. Much to the dismay of Westerners, Thais employ these phrases even in situations that are dangerous, even life-threatening. (Westerner: "The house is on fire!" Thai: "No problem.") If a Westerner protests, he is swiftly reprimanded with jai yen (see below #4).

This word is usually translated as "happy", but its use is often closer to "comfortable", "relaxed", or "well." To Thais, happiness is not a state opposite that of sorrow. Rather, it is more akin to tranquillity. Sitting by the seaside with the wind blowing your hair is sabai. Winning the lottery is not.

This difference is underscored by the fact that mai sabai, or "not sabai", does not mean "sad". It means "sick", "ill", and can even be used as a euphemism for "hungover".

Suffix the word dee, or "good", to sabai, and you get the standard Thai greeting: sabai dee mai?, or "Are you well?"

Thai offers many ways to intensify an adjective. One way is simply to repeat it. Thus sabai sabai could be translated into English slang as "everything's chill" or "not a care in the world". It is wellness almost beyond words, the Thais' heaven on earth.

The Thai people are usually described as sentimental, encountering life emotionally rather than intellectually. This is not meant to disparage them, and in any case they often disparage Westerners for being too cerebral, too cold. The linguistic centerpiece of this worldview is ruk, or "love". Just about every Thai pop song will be propped up by ruks, often in the form of pom ruk ter, or "I love you" (ter is the informal "you", like "tu" in French).

Ruk is also the root of the common word naruk. The prefix na is the equivalent of the English suffix "able" - thus naruk means "lovable", "adorable", or "cute." Show a Thai girl a photo of a lion cub, a live puppy, or a stuffed animal, and she is liable to squeal naruk! shortly before embracing or scratching the naruk thing's nose. (My sincerest apologies to Thai girls who don't do this.)

Ruk also gives us suttiruk, a term of endearment roughly meaning "sweetheart". (N.B.: Not to be used indiscriminately, especially as part of the phrase suttiruk ja, which means something along the treacly lines of "sweetie pie".)

The word jai forms a number of compounds that describe human emotions. In fact, my pocket dictionary lists sixty-seven such jai-words. Some of the most common are:

As far as the economy of the Thai language is concerned, the mind is a terrible thing to waste.

Thais take eating very seriously, no doubt in part because of the strong Chinese influence on their culture. I know a Thai woman of Chinese ancestry who, rather than asking me "How are you", asks me "Have you eaten yet".

Gin can mean "eat", but it is more akin to the word "ingest": one can gin nahm ("drink water"), gin kao ("eat rice"), or gin ya ("take medicine"). Gin is also used to describe the taking of a piece in chess.

Because rice accompanies just about every Thai meal, gin kao is usually used instead of gin to mean "eat." It is perfectly acceptable to use gin kao to describe the inhalation of a cheeseburger, for example.

Deriving from this preoccupation with food is aroy, which means "tasty". Thus does aroy appear in the names of many a Thai restaurant. A common experience among newcomers to the kingdom is to be offered a food they have never seen before, together with the pronouncement aroy. Thais are very proud of their cuisine, so the follow-up question aroy mai? ("tasty?") is usually not far behind. (Suggested answer: aroy dee -- "yummy"? -- accompanied by a thumbs-up gesture.)

Sanook, meaning "fun", is a guiding principle of Thai social life. If you have recently returned from a trip, whether from Malaysia or the mall, you are likely to be asked sanook mai?: "was it fun?" An experience that is merely educational, or, as the argot has it, "intense", would probably be given the swift Thai denunciation: beua, or "boring". If it's not sanook, it's not worthwhile. Thus sanook and sabai are a common element of the names of Thailand's many watering holes.

Westerners often receive - and deserve - the charge of ba!, meaning "crazy" or "mad". You are ba if you do anything stupid or unexpected, like driving poorly or dancing spontaneously. Tellingly, the Thai phrase for methamphetamine - the country's most destructive drug - is ya ba, or "mad medicine".

We have already seen two forms of Thai greeting, "Are you well" and "Have you eaten". A third employs the word pai, or "go": pai nai mah, or "Where have you been". As with "have you eaten", many Westerners are taken aback by the seeming invasiveness of this question (their first thought being "it's none of your business"). But it is really little different in intent from "What's going on". (In other words, "I have been in the bathroom" is not what your interrogator is after.)

Pai is also the source of pa, which ostensibly means "let's go", or "get a move on", although a Thai will often say pa a hundred times over the course of an hour preceding actual departure.

No collection of essential Thai phrases would be complete without sawatdee, the all-purpose Thai salutation. No need to bother distinguishing between "good morning" and "good evening", "hello" and "goodbye": sawatdee covers them all. But there are alternatives for parting, like chohk dee, meaning "good luck". Chohk dee also serves as a fair substitute for "cheers", not in the evolved British sense of "thanks", but in the old-fashioned sense of "may the road rise to meet you, may the wind always be at your back."