The Great Mall of China 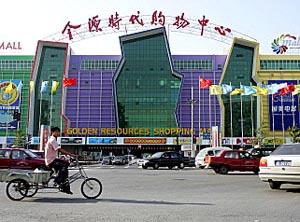 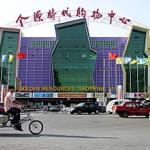 "She is graceful and mild, never fights with others and won't scratch your sofa -- she doesn't have the wild nature of ordinary cats," a shop assistant explains.

"But you do have to feed her nutritious imported cat food -- here, we feed her with Huangjia ("Royal") from France."

The shop is just one of several that provide grooming and creche services for pampered pets, offering Beijing's newly-rich peace of mind while they go for the shop-till-you-drop experience in the world's biggest shopping mall.

Resplendent in all its neon-lit glory, the steel and glass giant stands proudly amid a forest of new high-rise apartment blocks outside Beijing's Third Ring Road, tempting the richer generation of Chinese people with the allure of luxury brands.

Most of the shoppers, typically professionals in their 30s, still have vivid memories of seeing their parents buying food with ration coupons only two decades ago. Yet they are now arriving at shops and supermarkets with their kids in their new cars.

Market reforms after decades of communist austerity have unleashed a new obsession with materialistic wealth in China, and this is certainly manifested in the price tags, though not necessarily in taste, at this marble architectural cliche.

Inside the vast windowless shopping arcade ranges a surreal mix of international brands such as Guy Laroche, Geox and Ecco, with local wannabes such as Houshi Boss and the Body Quencher Shop.

Shops on the "culture" floor flaunt fake antiques, gigantic over-ornate wood carvings and ceramic with faux-heraldic designs. Just outside the pet shop where regal Miu Miu and her friends are playing, 30-year-old cleaner Wang Xiaofeng is industriously cleaning out the rubbish bin.

"Only rich people come here, I earn little, but that's life," says Wang, who sends half of his wage home to help raise his seven-month-old baby.

"Here, one item of clothing is easily several times my wage. But at home, there are no opportunities, you can't earn a decent living because farming is a dead loss," Wang says, shaking his head.

Inside Gimo Paris, where all clothes are tagged with labels saying "Designed in France, Made in Taiwan", a badly-cut lilac floral-print jacket costs the princely sum of 4,650 yuan, while a matching pair of trousers in flamboyant pink would set you back 1,650 yuan.

At Yilu children's clothes shops, a child's cotton dress costs 1,690 yuan -- not something even many Beijingers can afford to buy for their children.

The yawning rich-poor wealth gap is increasingly worrisome for the government of once-egalitarian China, with some 90 million Chinese out of a population of 1.3 billion still living on less than one US dollar a day.

According to the National Bureau of Statistics, the nation's richest 10 percent are enjoying 45 percent of the country's wealth while its poorest 10 percent has only 1.4 percent.

But even though the migrant worker cleaners are only on meagre incomes, they have a fatalistic outlook on life and consider themselves already luckier than people who are still tilling the soil at home.

Asked whether he is jealous of rich people who can easily splash out on a wallet that costs more than his monthly salary, Wang has no complaints. Nor does he blame China's market reforms in the past two decades which created this wealth gap.

"The reforms are good. We make a better living than people at home," he says.

"We can't compare ourselves to them. But we are already better off than people still living in the countryside."

They say they hope their hard-earned money will enable their children to get educated and claw themselves out of poverty so that they too may be able to shop in the Great Mall.

Jiao Cuiju, 37, also a cleaner from southwestern China's Sichuan province, says she can only put her hopes in her 16-year-old son. "I just hope our children won't have to do what we do. I hope in the future, they'll be the people who are shopping here as opposed to working here."

Others who can't afford to shop here say they have simply come to while away their spare time staring at luxury goods. To them, the Golden Resources is a dream and an aspiration for their future.

Zhang Chunhua, 26, a hospital clerk, and his girlfriend say they have never bought anything from the shopping centre because things are too expensive.

"We're just having a stroll here," he says. "It's a nice place to look at things and spend your spare time."

Chen Xuejing, a shop assistant at a costume jewellery shop which sells pendants for up to 1,000 yuan and jewellery boxes between 400 and 600 yuan says business has been slow.

"To be honest, business has not been too good," she says. "Not everyone can afford to shop here, it really only caters for well-paid car-driving people.

"Ordinary people in Beijing earn only about 1,000-2,000 yuan per month, how can they afford to spend money here?"

The Golden Resources Shopping Mall is located inside the West Fourth Ring, on Yuanda Lu.