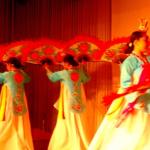 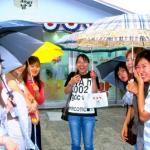 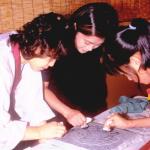 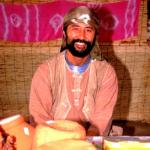 Maybe it’s the people – warm-hearted, smiling, and seemingly unperturbed by the pace of life in the frenetic modern Korea. Maybe it’s the beauty of the natural environment – from mist-shrouded hills to moss-covered trees drawing nourishment from a quiet stream. Or perhaps it’s the startling symmetry of the traditional wooden houses, their eaves and roof-poles decorated with brilliant designs in a hyper-palette of vivid colour.

Or maybe it’s all of these.

Whatever, the countryside of Korea comes as a totally unexpected delight. While the capital Seoul may sometimes appear soulless, the opposite is true once the visitor ventures beyond the bounds of this sprawling metropolis.

Korea’s ancient capital, Gyeongju, is a showcase of the nation’s history and culture. For a thousand years up to the 10th Century, Gyeongju was the capital of the Silla (pron. “Shilla”) dynasty, which established Buddhism in the country in the sixth Century. It is said the purest form of Zen Buddhism is to be found in Korea; yet at the same time, shamanism continues to be strong, with most Buddhist temples having a shaman-in-residence to minister to the needs of traditional worshippers.

Yet somehow, Gyeongju wouldn’t be the same without the rain – the mist hanging over the hills, the warm clammy drizzle that lasts throughout the day, and a feeble light ever-so-occasionally peeping shyly through the clouds. And this is in late summer. In winter, the landscape wears a thick mantle of snow. Only in June and July and again in October can the visitor be reasonably sure of encountering warm, sunny weather.

Every three years (sadly, during the rainy months of August-September), Gyeongju stages the World Culture Expo, a lavish event based around a particular theme. In 2003, the theme was Dreams of the Flying Horse: Harmony in Diversity, telling the story of the flying horse Giparang, which is said to have visited both heaven and earth on a mission of reconciliation between nature and mankind.

The timing of this Expo theme could not be better. With the Kyoto protocols hammered out in neighbouring Japan now coming under near-terminal strain, maybe what the world needs is a whole cavalry of flying horses. Their impact on global warming would most certainly be less than that of Hyundai or Daewoo, or any of the other major Korean business conglomerates.

Possibly the most interesting section of the World Culture Expo is the Nanjangteugi, a traditional Korean open produce and handicrafts market that takes the visitor back two thousand years in time. On hand are a traditional dye-shop, a rustic cantina/tavern, fortune-teller’s stall, a silk-weaving shop and many others. Clad in magnificent Silla dynasty robes, the women “manning” the shops are grace personified.

While the next Cultural Expo will not be until 2006, the Silla Cultural Festival (a slighter smaller version of the Cultural Expo) is held every year, in the first week in October (see Fact File). Featured are a swordsmanship contest, the National Traditional Music Festival, and arts and wrestling competitions. To top off a week of celebrations, the Seorabeol feast promises to be a gross-out even by Korean mega-dish standards (at one “standard” Korean banquet, I counted no fewer than 37 different dishes laid out on a groaning table).

But it is time to explore some of Gyeongju’s landmarks, undeterred by the drizzle that sporadically breaks into a torrential downpour. On the “must-see” list are two of Korea’s greatest national treasures – Bulguksa Temple and the Seokguram Grotto, located on adjacent hilltops on the south-eastern outskirts of the city.

Bulguksa Temple, like most temples in Korea, is guarded by the Gate of the Four Guardians, deities varying in demeanour from smiling to teeth-gnashing. The most benign-looking of the deities, Chigukch’onwang, guards the east. It is said that together, the Four Guardians represent the triumph of wisdom over ignorance; maybe I should have stayed there, and spent a few lifetimes passing through the Gate.

First stated in 528 but not completed until 751 AD, Bulguksa Temple has several times been destroyed by fire and earthquake. The most recent reconstruction, taking four years from 1969, was the most extensive yet, for the first time in hundreds of years restoring the building to its original glory. Nowadays, it totally dominates the surrounding landscape, where moss-covered trees by a babbling stream keep watch over the extensive temple gardens.

King Kyongdok, 35th in the Silla dynasty lineage, built Bulguksa to honour his parents. Whereas Bulguksa Temple was for his parents in “this” world, the neighbouring Seokuram Grotto was on behalf of his parents in the “other world”. I couldn’t help feeling that the climb to the cave was itself ample penance.

But the effort made in ascending Tohamsan Ridge is amply rewarded, as the Buddha figure in Seokuram Cave has a mesmerising impact on the visitor. Nowadays, the statue is behind glass, and photography inside the cave is prohibited; but the blessings of the Buddha seem not to be at all limited by glass, or able to be contained within a single photographic image.

The end of the Silla Dynasty saw the rise of Confucianism in Korea, under the Goryeo, Yi and Joseon dynasties. One of the best-preserved records of this era is Yangdong Folk village, a hamlet dating from the 15th Century, with a fine collection of over 150 still-occupied old wooden houses. This village is far from being a static theme park, but is a living-and-breathing community that invites extensive exploration.

On the outskirts of Yangdong, Gwangajeong Pavilion is the former home of 15th Century government minister Son Jung-Don. To Gyeongju resident Lee Hyun-Jung, this place is more than just a cultural treasure. “I grew up in a house like this”, she says. “I used to think the rooms were REALLY big – but they were so hard to keep warm in winter”.

Hyun-Jung’s family is now building a modern house, but she wonders how they will cope with the relatively cramped living spaces. “The wooden houses look old-fashioned nowadays”, she says, “but at least there was plenty of room to move.”

These reminiscences illustrate the great paradox of this country. Korea remains a mystery to most outsiders: an outwardly wealthy, modern society but with values that are firmly rooted in ancient history. I get the compelling feeling that there are deep lessons to be learned here – lessons going far beyond the barriers of language and culture – provided only that the visitor has an ample amount of time to spare. If the luxury of an extended stay in Korea can be arranged, then Gyeongju makes an ideal starting place.

Getting There: Asiana Airlines provides excellent service on its daily flights to Incheon International Airport, near Seoul in South Korea. From Incheon or Seoul, Gyeongju is about three hours by fast rail.

Where to Stay: The new lakeside Bomun Lake Resort offers a huge number of hotel rooms in all price ranges. A good mid-range choice is the Swiss Rosen Hotel (tel +82 54 748 4848).