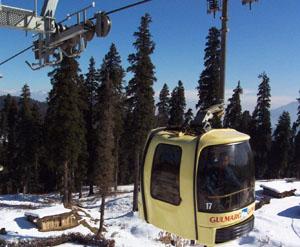 A gondola making its way from the Gulmarg resort to Kongdoori on the only existing cable-cars in Kashmir. 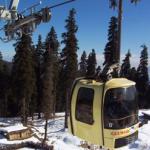 KONGDOORI, India, Jan 8, 2003 - Rebellion-torn Indian Kashmir will be among the best ski destinations in Asia when one of the region's highest cable-cars is completed this year, officials said. Residents are expecting a boom in winter sports when French company Pomagalski finishes the 2.5-kilometre (1.6-mile) cable-car between Kongdoori, a bowl-shaped valley 55 kilometres (34 miles) north of Indian Kashmir's summer capital Srinagar, and the Afarwat peak.

The company says the cable, which will use gondola-style cabins to transport customers, will be among the highest in Asia as Afarwat sits at an altitude of 14,500 feet (4,390 metres).

Work on the project has been halted until April because of the harsh winter and an accumulation of snow, but it is expected to be completed by the end of the year. "Pomagalski is one of the best companies in the ropeway business in the world today and I salute the dedication of its technicians," said Farooq Ahmed, the head of Kashmir's Cable Car Corp. (CCC). "Now it is involved in record-breaking work," he added, referring to the high altitude of the new cable-car.

Pomagalski had already built the only existing cable-car in Kashmir, from the resort of Gulmarg to Kongdoori, which is at 13,000 feet (3,930 metres). The 2.5-kilometre ropeway, operated by the CCC, costs 100 rupees (two dollars) for a return trip and is used by skiers and other tourists.

Government ski instructor Shabir Dar said the new cable-car would attract skiers from all over the world. "Courtesy of the Frenchmen we will soon have a boom in winter tourism," said Dar, adding the cable-car will make "Kashmir one of the best ski destinations in Asia."

Work on the first cable-car coincided with the eruption of the armed anti-India rebellion in 1989. The French technicians abandoned the project in 1990 when the Muslim insurgency gathered steam. But as Gulmarg was relatively safe compared to other parts of Kashmir the French returned and the cable car was completed in 1998. They are now working on the second phase.

The locals are full of praise for the French workers, who are braving violence which has killed more than 37,500 people since 1989. "Despite ongoing insurgency they never lacked commitment," said tourism official Ghulam Mohammed Dar. Rahul Jain, Pomagalski's representative in India, said Gulmarg was a relatively safe area to work in.

"The cable-car is very popular and there are huge queues of tourists. Even if there are not tourists from abroad there are many Kashmiri tourists who use it," he said.

"The French technicians are always on time whether it is raining or icy winds are blowing at high speed," said Riyaz Malik, a CCC official. "They work for hours together and make us also work hard," said Malik, who is one of the many Kashmiris trained by Pomagalski to run the cable-car.

In Kongdoori everyone, from officials to labourers, is waiting for April when work will begin again. "We are eagerly waiting for the (French) to return to learn more from them, and to see the second phase being completed on time," said Malik. "Thanks to Allah and the very good product given to us by the French company we have had no problems so far," he added.