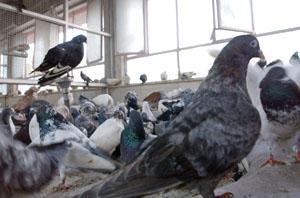 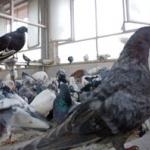 New Delhi, April 15, 2003 - Birds can eat too many worms, paper kites can cripple them and even crows with cast-iron stomachs develop aches in the pollution-rife Indian capital.

But help is always at hand -- a hospital that makes even humans envious. Within a Jain temple compound in the old part of the city stands the three-storey Charity Birds Hospital where about 15,000 birds are admitted annually and 25 to 30 are brought in daily to Out Patient's Department treatment. Jains are strict vegetarians and many Jain priests abjure clothes. They don a mask to avoid accidentally swallowing insects -- underscoring their commitment to saving lives.

On a typical evening a student brings his one-week-old green parrot to the emergency room. Another youngster is carrying his paralysed pigeon. The man in charge of emergencies, K. Rajindra, prescribes a concoction and gives out some pills, all for free. His colleague, who gave his name as Jayalal, feeds two orphaned sparrows in the intensive care unit.

The hospital recently carried out eye surgery on two peacocks. But there is one condition for the free treatment -- once the bird is cured and back on its feet, it will not be returned to the owner, but set free. The bird must take its flight to freedom from the hospital's terrace overlooking the Red Fort, the 17th century edifice built by Mughal emperor Shah Jahan.

Behind the emergency room are two wards. The 272-bed -- or rather cage -- hospital has an intensive care unit where two attendants keep an eye on the patients until they are fit enough to walk. Those on the road to recovery are moved to the general ward on the upper floor, which has three large cages where staff track the flight skills of their charges. Twice a month, those who make a full recovery are taken to the terrace and sent off, a ritual maintained by the hospital since it opened in 1929.

The wards are clean and well maintained and put many state hospitals in South Asia to shame. As the hospital does not usually accept carnivores, those admitted are denied meat. Early birds get no worms, but a strict diet of cereal, vegetables and fruits.

"If there is a sick eagle, we take it in for treatment," said Rajindra. "But we give them vegetarian food. They must get used to it."

Pigeons are the most frequent visitors to the hospital, accounting for 9,123 admissions last year. Parrots are a distant second with 1,408 while swans are a rarity. More than 1,000 bird patients had worm infestations last year and some 5,700 had some kind of injury or fracture, usually from ceiling fans or kites, Rajindra said.

The hospital's manager, Kamal Kishore Jain, advises bird lovers to cover their ceiling fans with a wire mesh to prevent birds crashing into fan blades and getting hurt, a common household accident. Officials say the hospital is also seeing a surge in the number of birds with respiratory problems, mainly because of air and water pollution in New Delhi. Between 2000 and 2001, more than 7,000 birds were treated for respiratory problems. The quality of garbage has also gone down and more than 400 birds including crows, fell ill probably after scavenging, last year.

Each day, the hospital unloads two sacks of grain on its rooftop for birds to feast on. The temple premises are a sanctuary to dozens of parrots, sparrows, mynahs and other species. The hospital also has advice for curious visitors: "Never buy wild caught birds. For every one that reaches a store, four will have died along the way."