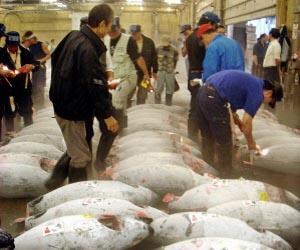 Fish brokers checking frozen tunas before their auction at the world's largest fish market at Tsukiji in Tokyo. 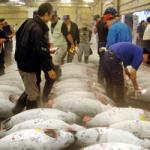 TOKYO, May 9, 2005 - The world's biggest fish market, Tsukiji in the heart of Tokyo, on Monday closed its famous tuna auction to tourists whose oos and aahs at the jumbo seafood has proven too much for merchants to handle.

The market on the edge of the upscale Ginza shopping district has traditionally accepted streams of tourists, many of them foreigners, who come in when trade opens at dawn and top off their experience with a sushi breakfast.

But the excitement during tuna auctions has distracted the fishmongers from their serious business.

"Sometimes we see as many as 100 tourists for tuna auctions, which take place around 5 am or so. The flashes of their cameras make it difficult for auction organizers and participants to see numbers displayed," said Shigeo Hagiwara of the metropolitan government.

"Some tourists touch fish on sale, making a big sanitation concern for us," he told AFP.

"Auction participants use big hooks to handle frozen tuna. Some tourists got too close to the auction and were hurt. We want to prevent those incidents from happening again. Tourists are affecting operation of the market," he said.

Tourists will still be able to enter the premises of the market, but the tuna auction area will be roped off.

Hagiwara also acknowledged that the market would be unlikely to physically evict any tourists who persist and defy the ban, provided they watch quietly.

The Tsukiji market, officially called Tokyo Central Wholesale Market, each day handles a total of 2,246 tons of seafood worth more than 17 million dollars. It sells 450 kinds of seafood, of which tuna is the most popular.

The image of hundreds of frozen tunas lying on the vast concrete floor, a thin mist of icy steam hovering over them as they are readied for auction, has become one of the emblematic pictures of Tokyo in guidebooks.