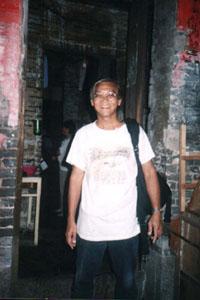 My Ancestral Home in Jiangmen -- The House Still Belongs to My Family. 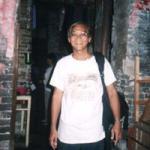 The municipality of Jiangmen, Guangdong province, which includes the prefectural city of Jiangmen and five counties (or Wuyi in Pinyin Chinese) of Xinhui, Taishan, Kaiping, Heshan and Enping is touted as the Number Homeland of Overseas Chinese. Whilst at present there are some 3.8 million people residing in Jiangmen Municipality there are some 3.7 million overseas Chinese residing in virtually all corners of the world whose ancestors emigrated originally from Jiangmen's Wuyi Region. My family is of no exception; my grandfather migrated to Malaysia (then known as Malaya) in the late 19th century. My wife's paternal grandfather was born in Kaiping but emigrated to the gold-mining town of Raub in British Malaya when he was a youth while my mother-in-law's father hailed from Taishan and he too immigrated to Malaya. In general, the diaspora started in earnest towards the second part of the 19th Century until all the bamboo gates in China were bolted with the triumph of Communism in 1949.

Up until the 1960s the majority of Chinese Americans were immigrants from the Wuyi region or with preponderance from Taishan Village. The rest of the migrants from the Wuyi Region made their way often under severe hardship and as indentured laborers mainly to Hong Kong, South East Asia, Australia, New Zealand, Canada, United Kingdom and parts of Europe.

Why the Mass Exodus?

Although the Wuyi Region (euphemistically referred to as the Fertile Land of Rice and Fish) is generally a flat country with gentle hills and much arable land of rich soils and blessed with kind weather and lush rainfall there was a steady migration of its populace starting from the second half of the 19th century. The root causes can be traced to wars, uprisings, civil disorders, lawlessness and famine. Ever since the imperial Manchu government lost the First Opium War (1839-1841) to Britain she had been losing all the wars with foreign powers. In virtually all the battles her armies had been badly routed because the state of her war craft was hopelessly archaic. As a result of the First Opium War (1839-1841) she was forced to cede Hong Kong Island to Britain as well as open Canton (renamed Guangzhou) and four other port cities to foreign residence and trade. In 1856 China was again defeated by combined British and French forces during the Second Opium War and as a result she lost Kowloon to the British and was compelled to open up 11 other port cities. Meanwhile there were rebellions in many parts of China from the 1850s to the 1870s. The Muslims in South West China and North West China rose violently against the authorities. More serious to China's masses was the Taiping Rebellion which was led by Hong Xiuquan who believed that he was Christ's younger brother and destined as the Chosen One to bring about the Heavenly Kingdom in China. It was prolonged and widespread. Almost 20 to 30 million died as a result of the fury unleashed by the Taiping Rebellion.

In 1894/95 the Chinese armies were utterly defeated by the Japanese in the battle fields during the Sino-Japanese War and Japan soon annexed Taiwan. With the defeat by the Japanese the European powers responded by a policy known as "carving up the Chinese melon" and scrambled for more Chinese territories. Russia acquired Port Arthur, Germany got Shantung, French forced China to lease Kwangchowen (Zhanjiang) in Guangzhou Bay for 99 years and Britain secured a 99-year lease over the New Territories.

China suffered extreme humiliation and shame. The Chinese people imbibed with strong anti-foreign sentiments killed foreigners in what was known as the Boxer Rebellion in 1900. As a result the European forces captured and occupied Beijing and forced the Imperial Government to even more humiliating terms. It was not surprising therefore that the Imperial Manchu Government was overthrown in 1911 as it was so feebly and irredeemably impotent. With so much wars, lawlessness, famine, drought and deaths (60-million shrinkage of population by 1900) it was natural for the people from Jiangmen and Wuyi Region to flee their homelands to escape from starvation, misery and poverty. They took a gamble to start new lives in the land of the unknown. The gold mines of California, the bright lights and affluence of New York, the gold and iron ores of Australia and the verdant, fertile and virgin lands of South East Asia served as powerful beacons to beckon the people from Wuyi Region.

The Wuyi Region is located in the central south of Guangdong Province. It covers a land area of 9418 sq. kilometers (3636 sq. miles). Much of the land consist of the river basins of two large rivers the Tanjiang or Tan River and the Xijiang, China?s third longest river and the main tributary of the Pearl River or Zhujiang. The Tanjiang river system rises nearby in the mountains in Tianlu Shan of Yangjiang County, west of Enping County, flows through Enping City, the mid-section of Kaiping City and then continues on as the boundary separating Kaiping and Taishan counties before reaching Xinhui County where it splits into multiple channels to form a common delta with the Xijiang.

The main channel of Tanjiang then flows through the scenic Yinzhou Hu (Silver Island Lake) before discharging through historical Yamen (Cliff Gate) into the South China Sea. The Xijiang with its three main tributaries of the Yu, Qian and Gui rivers runs through the Yunnan, Guizhou and Guangxi provinces before entering Guangdong Province and passing through cities such as Foshan and Jiangmen before it becomes a cobweb of streams to form the Pearl River Delta which is perhaps the fastest growing economic region in the world today.

Jiangmen City lies along one of the main channels of the Xijaing and the waters from this channel discharge itself into the South China Sea at Modaomen (Sharpen Knife Gate) the South China Sea gateway into Jiangmen and Wuyi Region from Macau and Hong Kong. For centuries the lives of the people of Wuyi Region centered around these two rivers which provide the fish, shrimps, mussels, clams and other food and the waters to irrigate the paddy fields, vegetable and fruit farms which are found in abundance except during the troubled times from the mid 19th Century to mid 20th Century.

Jiangmen City proper with a population of half a million people is the main gateway into the Wuyi Region. Jiangmen City fronts the Xijiang and its name is derived from the word "river" ("jiang") and "gate" ("men"). The city lies astride Mount Yandun in the south and Mount Penglai in the north and they face each other hence giving the city its name.