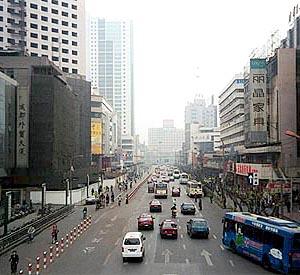 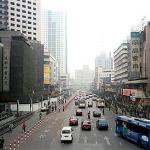 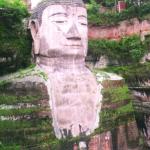 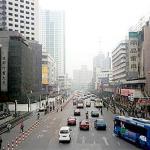 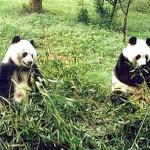 Chengdu: The capital of Sichuan. Although I have resisted taking a trip to this little-known place, I caved in to my friend's demands during my most recent trip to China. So I took a short detour, after my Yangtze River Cruise, with promises of delicious Sichuan cuisine and a wonder culture experience awaiting in Chengdu.

It was an eye-opener to discover this was no mud town with low, colorless buildings typical of many Chinese towns. This was a thriving, pulsating, modern metropolis of four million people. I also soon learned the territory of Sichuan Province, of which Chengdu is the capital, is slightly larger than France.

Chengdu is located in the center of the central Sichuan basin, at the confluence of the Nan and Fu rivers. The biggest surprise was to find that Chengdu is one of the oldest cities in the world. It is jam-packed with history.

In the 3rd century BC, the powerful Qin's conquered all of China, and in 221 BC Chengdu was established as the capital of their empire. People have lived in Chengdu for almost 4000 years, making it a historic city believed by some to be the oldest established city in the world.

Once the starting point of the "Southwest Silk Road," it continues to be one of the most dynamic and attractive metropolises in Western China. Besides being a major agricultural center, Chengdu also has become the industrial, communications and transport hub of the area.

During the late Han dynasty (AD 22-220) Chengdu was renowned for its silk brocade weaving and thereby became known as the "City of Brocade". In fact it was also known as the "Storehouse of Heaven" because of the agricultural wealth of Sichuan. During the Five Dynasties Period (907-960), a ruler of the late Shu dynasty, Meng Chang, had many hibiscus trees planted on the city walls, thus giving Chengdu the name of "City of Hibiscus".

Chengdu's layout is based on that of Beijing but it is greener and has a more traditional charm to it. It is as if parts of China's history have remained embedded in the many markets and drinking houses of this quaint city. The extensive redevelopment seems to have left Chengdu's soul untouched and walking through her delightful back streets and alleys may seem like a trip back in time.

There were scores of things to see in Chengdu, but the local government officer who invited me to Chengdu thought it best that I get orientated by driving 60 kilometers to the Dujiangyan Irrigation System. Was he directing me to take one of those stuffy government propaganda tours?

The drive was over a new express highway through some lovely Chinese countryside. It was a change to see rural China up close. The irrigation system is a glance at a project that was developed 2,250 years ago. Being located on a fertile but dry plain, the Qin constructed the world's largest irrigation system, based on the diversion of the Min river. Still in operation today, the irrigation system supports the world's densest agrarian population.

But there was more than a dam and an irrigation system. The town where the dam is located is filled with ancient temples and Buddha shrines. It's a showpiece of Chinese architecture that is over two centuries old. One day in Dujiangyan is certainly not enough to discover the hidden treasures. All too soon, it is time to get back to Chengdu for a traditional Sichuan dinner.

My first authentic Sichuan dinner was literally a baptism of fire. Sichuan food is seriously spicy. If you've ever eaten "Sichuan" chicken in a Chinese restaurant in America, congratulations, you've eaten a plate of chicken cooked in ketchup. Even the Sichuanese restaurants in Beijing left me ill-prepared for what I had in Chengdu. Authentic Sichuanese food makes your typical Indian curry look like a tuna fish sandwich on white bread. And unlike Indian or Thai food, which just tries to be spicy, Sichuan food has a two-pronged approach: it's spicy, but also very numbing. So as you're eating, your tongue is dealing with these two contradicting sensations, and the natural response is to drink beer at really fast rate to wash the taste out of your mouth.

After that, my host brought me to the Chinese theatre in a traditional Chinese Tea House, the kind you see in old Chinese movies. The Tea House was a step back into ancient China, but it was not a replica of something out of the past. It was real, where the Chinese go to enjoy themselves. The decor was authentic, with heavy wooden tables and chairs, lanterns hung from beams and huge brown doors carved in oak.

On all the tables were plates of sunflower seeds. Waiters moved among the tables and served tea. They were showmen, and very apt at their trade. The teapots in this case were made of brass with thin meter-long spouts. The waiters twirled the pots above their heads, around the shoulders, and under their arms, and poured the tea with precision. Few drops were spilled.

The theatre was right out of old China. There was a show of classical Chinese music with drums, gongs, horns, and two-string fiddles. Then came a skit, a married couple dressed in ancient costumes. It was slapstick. The woman made a fool of the man but in the end the man won out. In another skit, a Mandarin tried to poison his wife but ended up getting poisoned himself.

There was a lady acrobat remarkably skilled, even lying on her back spinning a table with her feet high above her. A magician did his thing, by hiding smoking cigarettes and having them reappear in the oddest places. The most spectacular act was a mask dance. Two actors, male and female, in great colorful robes, wore masks from the Chinese opera. They changed masks instantly, as if by magic, one after the other, and not one or two but by the dozens. At the end, they removed their masks completely and the woman was very beautiful. She didn't need the mask.

Next morning: off to see the pandas at the Giant Panda Breeding Research Area. As the largest panda breeding area in the world, it successfully breed more than 100 pandas since it opened in 1998.

Visitors can not only watch these loveable (and highly endangered!) creatures at play, but can learn a few facts about them. For example, they are completely furless when born, like a rat, and can be held in the palm of one hand. They eat constantly, about 20 kilos of bamboo each day, and when they aren't eating, they are sleeping. They date back to the dinosaur age and are rapidly disappearing from our planet. Not all pandas are black and white. There are also red pandas that look much like a fox.

Another surprise came when I was asked if I wanted to see the Sanxingdui Museum, an important site they said. I would have preferred spending my time seeing more of the city and countryside, but decided to tag along. I had no idea what I was about to discover.

In 1929, three farmers from a family by the surname of Yan were digging a pit to install a waterwheel and found a heap of colorful jade. But it was more than a few pieces of jade they uncovered. They had discovered a lost civilization, the site of the Shu Kingdom City, one of the five major cities in ancient China. Subsequent archaeological finds shed light on the history and culture of the ancient Shu Kingdom (about 1600-1066 BC).

Excavations down through the years continued, but it wasn't until 1986 that a world-shaking archaeological marvel appeared. Two large sacrificial pits belonging to the ancient Shu Kingdom were discovered.

The historical relics unearthed at Sanxingdui are as treasured as those found in Egypt and Greece. The Sanxingdui Museum was built on the ruins of this ancient city, and it houses a large amount of its relics. It's considered by some to be more significant than all other archaeological finds in China. Again, one afternoon was not enough.

About two hours drive away from Chengdu, in a town called Leshan, there is a huge statue of Buddha cut in stone. For those of you whom are fond of reading the newspaper, the Leshan Buddha is very similar in size and stature to those Buddhist sculptures that the Taliban were blowing up in the spring of 2001.

As tall as a 20 story building, it was carved out of the mountain in 300 AD. We were not only able to see the Giant Buddha close up, but we were able to explore it from head to foot by taking steps cut into the rock that follows along its side. It's a breathtaking experience, and worth a trip to China even if this is the sole purpose for going - especially when the Bamiyans in Afghanistan are no more.

For history buffs, the sites in Chengdu are endless. In the five days that I was there, I visited the Temple of Marquis Wu, a temple in memory of Zhuge Liang, prime minister of the Shu Kingdom (221-263AD). During the Three Kingdoms Period, Zhuge Liang was ancient China's outstanding politician and military strategist. His name is the symbol of wisdom.

Then there was Du Fu Thatched Cottage, the former residence of the Tang poet Du Fu (712-770AD). Then there was Wangjianglou Park, located on the banks of the Jinjiang river. It was interesting in that it has 1041 types of bamboo. Not far away was Wenshu Temple, from the Tang Dynasty, with 450 Buddhas and many other treasures.

For those who admire nature's creations, Singdu Gui Lake is a must-visit. One of eight popular places for lotus in China, the beauty of the lake have been mentioned in poems dating back to the Ming Dynasty era. The lake is famous for its big flowers, bright colors and long blooms.

All too soon, it was time to bid this city farewell. I will certainly be visiting again, enroute to Tibet the next time!

How to get there: Many airlines fly direct to Chengdu. Alternatively, take a domestic flight upon arrival in major cities like Beijing or Shanghai.

Shopping: Chengdu is known among the Chinese as "The Storehouse of Heaven," a shoppers' paradise. In shops and even street side stalls, you can find exquisite embroidery, brocade, lacquerware, bamboo, plaited straw goods, cutlery and pottery, all famous Sichuan products. Chengdu itself has long been known for its silk, bamboo products, herbal medicines and a highly developed heavy industry.

Dining: Travelers need not be reminded that Sichuan cooking rivals Cantonese as the world's most popular regional Chinese cuisine. Though best known for its spicy dishes, Sichuan fare is in fact wide-ranging and sometimes delicate. Chengdu's cuisine in particular has been described as "one of China's most outstanding."