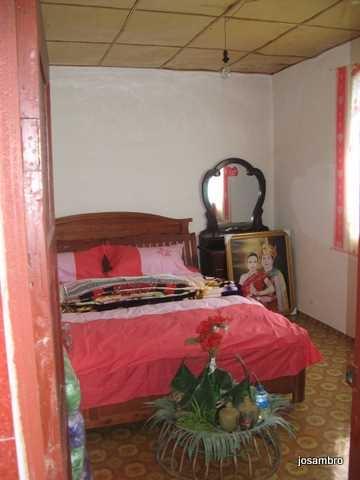 The newlywed's wedding bed, in the home of the groom. 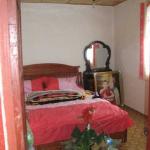 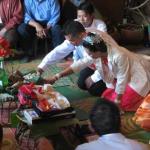 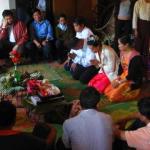 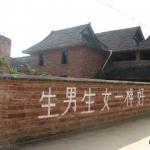 I am in Simao Zhai, a Dai minority village about 20k north of Jinhong in Xishuangbana; somehow - don't ask how - I find myself one of many honored guests at a Dai wedding. The Dai people, one of China's 56 ethnic minorities, are about 1/3 of Xishuanbana's population of 1 million. The family whose house I'm in are Shui Dai, or "water Dai," a subset of the Xishuangbana Dai, and the whole village is here, pitching in to make the bride and groom's day memorable. Teamwork and village spirit are an important aspect of life in a Dai community, and the whole village gets together regularly to throw wedding banquets, build houses and barns, or get generally collective. They are like the Amish, only much, much prettier.

At this moment, though, the Water Dai seem little different from that of Han Chinese, or really anybody else in this of the world, in one respect: they are force-feeding me. For the most part, I am not resisting. We are all eating foods typical to a Dai wedding party, foods designed to promote an auspicious marriage promising the birth of many children (though Technically the Dai, as a minority people, are limited to having only two, which is one more than Han Chinese are allowed). Our low, round table, made of woven bamboo, is crammed with dishes, dishes containing shen niu and shen tsai - raw spiced beef and raw vegetables, more tasty than it sounds, actually, and auspicious, as the word sheng, meaning raw, sounds the same as the word sheng, meaning birth. There are also several dishes made of cow innards, which, being prone to gout I'm giving a wide berth to, same for the corn liquor and rice wine. Then there are the mushroom dishes, various barbecued beef and fish plates, plastic bags filled with sticky rice, sweet bean and papaya jelly soups, pig blood soup and about dozen or so other dishes I haven't tried.

Everything is delicious, even the things I refuse to eat (I make this claim based on the reaction of my table mates, a mixture of Han people from elsewhere in China, local city-bred Dai, and one portly British barkeep called John). Every few minutes an old woman wearing a long pink dress comes in and places more food on the table. Somehow, a bag of roasted beef has appeared by my left hand, so rather than appear rude, I'm going to pause the narrative for a bit and get back to the festivities.

...about two hours later. I am sitting next to a young lady whose job it is to collect the red envelopes, gifts from well-wishers. I'm still stuffed, more so even, as several dozen more small dishes of food having been brought out to replace the several dozen in various states of eaten-ness. So the party is in full swing, despite a small snag: Where are the happy nuptial-ing couple? Stuck in traffic, apparently.

As is the Dai custom, a party has been sent out from the groom's village, consisting of the groom and his family, off to the bride's village, about 30 km to the north, to pick her up. Perhaps this custom is a throwback to the days when the tradition was likely better known as kidnapping. Or maybe it is just romance. Alas, owing to traffic and road construction, the party was delayed, and the actual ceremony, meant to begin at around one, has been delayed pending the arrival of the couple themselves. A quick call made from groom's to bride's village has confirmed that, as of two pm, the happy couple is en-route from latter to former, so actual vows should be exchanged any hour now. In the meantime, there's the subject of food to contend with. The dishes from the kitchen show no sign of stopping....

...An hour or so later. With the bride and groom still at least 20 minutes away, Echo Lam, a Hong Kong transplant who's made Xishuangbana her home for the past three years and I head outside, where she explains to me some of the local Water Dai marital customs. In addition to bride and groom being on the road, the gift train is flowing in both directions. As in other parts of Asia, the exchanging of gifts is a big part of the wedding. As it's explained to me, the exchange is a bit lopsided, favoring the family of the bride. Silver is the traditional gift, and at a Dai wedding it falls upon the groom to give it in copious amounts. Silver bracelets, silver belts, silver earrings, and other riches are flowing towards the bride's village as I type. The bride's family has it easier; a few minutes ago their gift-train arrived in Simao Zhai, family members unloading blankets, quilts, pillows, bedding, and a few beautiful wooden chests and bedroom dressers. I ask Echo if these might be filled with Silver. "Not likely," she replies.

Finally, just before three O'clock, the big moment, or its pre-cursor at least, has arrived. The happy couple are here. She is stunning, wearing a traditional red Dai dress made of cotton and silk, long and narrow (rather similar to what you might see in a Thai village). He is dressed more-or-less in a casual western fashion, and looks more-or-less nervous. He picks her up on his back, fireman style, and carries her from the car to the main house, and the gathered revelers immediately start throwing water over them both. Another Dai custom.

The couple arrive to the place of ceremony dazed,wet, surrounded by friends and strangers and clearly overstimulated. (This was basically what happened at my wedding in Taiwan, except nobody threw water on either I or my wife.) As respected foreign guests and men with cameras, John and I are allowed to pick our spots on the floor to maximize our choice of shot angles of the couple exchanging vows. The ceremony is being held on the second floor of the groom's family home, a sort of pier-and-beam open loft space which, by the way the floor is buckling underneath us, seems to be seriously straining its design capacity. "Chinese Wedding party marred by fatal collapse; Lonely Planet author crushed," would be the likely headline.

Though the clutch of merry-makers who've been drinking for too long to make it upstairs seem completely unconcerned, still knocking back shots of corn liquor underneath the ceremony itself, I still pick a spot close to the window.

The ceremony begins. The bride and groom sit kneeling, their hands joined together on an short a short alter covered with flowers and colorful cloth. An old man, a village elder, chants Buddhist scripture in the Dai language, the couple leaning over and nodding at various points. The chanting lasts about ten minutes, and when it stops the bride and groom are given a cup of strong liquor, from which they drink, making strong faces. The couple then tie strings around each other's wrists, a custom that transcends all cultural boundaries. There is more chanting, some sort of Dai "I now pronounce you man and wife," at which point members of both families, some laughing, some crying, flock around and tie more strings around the couple's wrists. Somebody invites me to go up and tie a string myself, but I'm too shy, and just holler out "Gongxi," - congratulations.