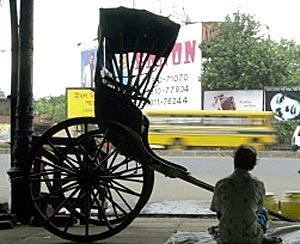 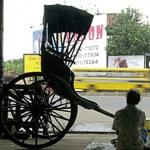 But the announcement made on Monday, Independence Day, has thrown the spindly-legged, rag-clad rickshaw pullers -- immortalised as a symbol of Kolkata in books such as Dominique Lapierre's "City of Joy" -- into turmoil.

The men, known as "human horses," worry about how they will earn their living when the ban takes effect within the next five months and their rickshaws can no longer ply the eastern city's serpentine, congested alleys.

"The City of Joy will become the City of Sorrow if hand-pulled rickshaws are banned," rickshaw puller Samir Sheikh said in West Bengali state capital.

"My grand-father and father were rickshaw pullers, I don't know any other trade but pulling rickshaws. My family will starve if the ban is imposed," said Sheikh, a short muscled man who did not know his age.

Like the character Hajari in "City of Joy," Sheikh's family and many other rickshaw pullers hail from impoverished neighbouring states like Bihar from where they fled to scrape a living in the bustling city of 12 million.

The rickshaw pullers, whose wiry bodies glisten with perspiration as they haul their human loads in Kolkata's steamy heat, earn around 100 rupees (2.25 dollars) a day. Most sleep, eat and live on the city's crowded pavements.

Now, scores of them are crowding municipal offices "pleading with officials to reconsider the decision," said Kolkata mayor Bikash Bhattacharya.

"We've stopped the annual renewal of licences and issuing fresh licences for hand-pulled rickshaws," he said. "We've told them nobody will be prosecuted for plying their trade until the government issues a notice."

A study by the non-governmental organisation, Action Aid India, has estimated the number of hand-rickshaw pullers in Kolkata at 18,000 but the rickshaw pullers' union says the number could be as high as 24,000.

In 1996 the state government outlawed hand-pulled rickshaws, only to back down in the face of huge protests. A year later, it offered rickshaw pullers 7,000 rupees to turn in their vehicles but got no takers.

But this time, the government seems determined to enforce the ban, saying hand-pulled rickshaws introduced to Kolkata in the late 19th century by Chinese traders have long been considered "inhuman".

"Nowhere else in the world does this practice exist," state Chief Minister Buddhadev Bhattacharjee said. "We want to replace these with three-wheeler cycle rickshaws propelled by better technology or auto-rickshaws."

No protests by the rickshaw pullers have been staged yet. Their union says it is counting on the government to make good on its promise to provide other employment.

The government has said it will offer loans to the rickshaw pullers to buy other vehicles but the workers fret about how they will repay the loans.

"It's good to hear the government will arrange loans for us but will it repay the loan for us? The banks will fleece us until we die," said Sheikh.

Some rickshaw-pullers object to government descriptions of their work as inhuman and degrading.

"We work, we do not steal. This is no indignity to me. It's a decent way of earning a living," said Mohammed Israel, who has been pulling rickshaws for 40 years.

"It has given me everything in my life -- a wife, two sons in my village in Bihar," the 58-year-old rickshaw puller said.

Holding a shining round small brass bell that he swings to warn pedestrians in his way, he said, "I even hear the tinkling sound of the bell in my sleep."