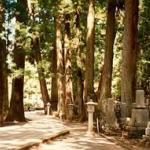 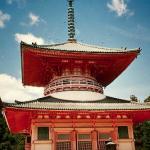 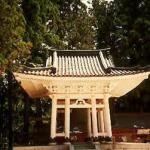 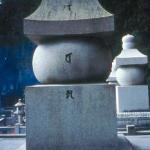 Mist shrouds the surrounding hills. The wind is cold and biting. Yet an extraordinary energy pervades this place, and you feel as though you've been plugged into a dynamo.

This is Koya-san, Japan's biggest temple-complex, and one of the best clues to unravelling the complex fabric of this vital nation.

Japan has a big impact on even the most detached visitor. Something about the Japanese character stands out: the refinement of values, incessant emphasis on quality, constant acts of kindness to strangers (such as going right out of their way to guide you to your destination) and so forth. All these set the Japanese aside as a very special people. And some of the clues to this "specialness" can be found at Koya-San.

Getting to Mount Koya-san is easy. Trains leave regularly from Osaka, the trip taking about 1¼ hours.

The journey to Koya-San is the stuff of picture postcards. The surrounding hillsides are so carefully terraced with rice paddies, you'd swear that not a clod of soil has strayed from the designer's master-plan. And running through this chocolate-box picture is a state-of-the-art railway line, giving the whole place the look and feel of an oriental Switzerland.

From Hashimoto it's about a 40 minute run to Gokurakubashi, the rail line continuing to climb through forests of fan-palms, pines, birch, cedar and bamboo. Little railway stations cling to the hillsides, their mini-platforms providing the only terrestrial link with the outside world.

At Gokurakubashi you change to the Koya-San cable railway. This amazing train, in use since the 1930s, whisks passengers to the top of Mount Koya-San in just 5 minutes. So steep is the gradient, it's hard to know whether you're in a cable car or an elevator. At the time of my visit, increasingly thick layers of snow lay beside the track, with forests of rhododendrons and umbrella pines forming a picturesque backdrop.

At the top station, you're still a fair distance from "downtown" Koya-San. A Y200 bus fare drops you at the Tourist Office, as good a place as any to start from. The Tourist Office staff are friendly and helpful, and can make accommodation bookings for visitors.

The main form of accommodation at Koya-San is shukubo, or temple lodgings. A stay in one of these shukubo is a an experience that will never be forgotten. You stay in a traditional tatami-matted room with the most comfortable hibachi-heated bed you'll experience. The tariff includes two lavish (vegetarian) meals prepared according to methods passed down for hundreds of years.

If you stay at a shukubo and are invited to attend the morning service, don't miss the opportunity. Behind the chanting, in Sanskrit, Tibetan and Japanese, you feel some of the miraculous power of Koya-San.

I had the great fortune to stay at the Rengejo-in monastery, a solid, serene and simple structure built originally in 1190. Rengejo-in today is presided over by the enthusiastic Chief Priest Ryusho Soeda. Ryusho-san, a man full of laughter and light, speaks English at least as well as any Japanese person you'll meet: no mean achievement in the case of two so totally different speech-structures.

"I took on this job when my father, the former Chief Priest, passed away six years ago", said Ryusho-san, who then went on to explain the history of Koya-san.

Born in 774, Kukai's life as a Buddhist monk took a sharp turn in 804, following a dream in which he was moved to travel to China in search of a spiritual teacher. Arriving at Chang'an, the Tang capital of China, Kukai found his master Hui-kuo, the patriarch of esoteric Buddhism, who is reported to have immediately recognised his soon-to-be star pupil.

Hui-kuo passed on to Kukai all the secrets of this teaching, and chose Kukai as his successor ahead of all his hundreds of Chinese pupils. Kukai thus became the eighth patriarch of this tradition, which had originally been brought out by the great Indian teacher Nagarjuna and had been carried to China around 700 AD.

Shingon or Mantrayana Buddhism is the teaching that Kukai brought back to Japan from his China sojourn. Features of this teaching include a system using mantras, mudras (hand postures) and yogic meditation, enabling the practitioner to come into contact with a "universal field" of great dynamic energy.

Adherents of Shingon follow a path that leads, they say, through purification of the body, mind and speech, to realisation of Buddhahood with one's own body. Enlightenment is to be found in actual life: the state of "jivanmukta" of the Vedic tradition. Thus, devotees of Shingon are active in all walks of life throughout Japanese society: in business, politics or government.

Shingon does not deny the Theravada and Mahayana (Tibetan) Buddhist traditions. Indeed, these are seen as stages on the path, but not the final step.

There are now 18 divisions and 10,000 different chapters of Shingon, including 3,000 chapters following the original Koya-San line. Counting about 10% of the Japanese population as adherents, Shingon has had an influence on contemporary thinking and lifestyle far beyond what its numbers would suggest. The teaching is also active in Hawaii, mainland USA and Brazil.

Typical of Shingon's world involvement is Kukai's own life. Besides his spiritual influence, he was an accomplished engineer, particular in the fields of hydraulics and civil engineering. He established a private university in Kyoto, where students from all walks of life and of any religion could study medicine, astrology, prose and theology.

Approaching "death", in the year 835, Kukai instructed his followers to carry him to a cave on Okunoin hill, where he sat in deep meditation.

Fifty years later, the emperor Daiko had a dream of Kukai. He travelled to Okunoin and found Kukai's cave full of mist. A Toshi temple priest accompanying the Emperor touched Kukai's knees and, according to Ryushu-san, found them still warm, and that they transmitted "a pleasant fragrance" to his hands.

This encounter was a milestone in the history of Koya-San. Thereafter, Kukai was given a new name, Kobo Daishi. His tomb was sealed to prevent unwanted intrusion by curiosity-seekers, but even today meals are still offered outside the tomb. Kobo Daishi is believed to be still alive, and continuing to guide the destiny of the world from his cave.

Miraculous encounters with Kobo Daishi have been reported ever since his passing into the state of mahasamadhi ("deepest meditation"). One example is that of former Cabinet Minister Ikeda Hayato, who developed an incurable cancer of the throat and was forced to retire from politics. His mother persuaded him to make the pilgrimage to Okunoin. Following this visit he recovered, and went on to become Prime Minister of Japan.

Emperors and captains of industry are counted among others devotees of Shingon. It is regarded as a great privilege to be buried near Kobo Daishi; accordingly, over 200,000 tombs and graves adorn the leafy hillside pathways that lead to Okunoin.

There are two main "districts"of Koya-San: the area around the "Garan" or temple precinct and the Okunoin area itself. It's good to allow enough time, say the better part of a day, to see each of these areas, plus long enough to just wander around town, grab a meal or a cup of coffee, and feel some of the Koya-San mystique.

Kukai's original "Garan", a complex of frequently rebuilt sacred halls, is the site of Kukai's original monastery and seminary. The Kompon Dai-to, the Great Pagoda, is a huge red-and-white structure rebuilt in wood and concrete in 1937. This is the central symbol of Koya-San, and denotes the world of action. The second structure of the Garan, the West Pagoda, denotes the world of wisdom. And the Kondo "Great Hall", a majestic and austere-looking building rebuilt in 1932 after a disastrous fire, denotes the union of wisdom and action, a central tenet of Shingon.

There are many other shrines and temples to see in the Garan area. Take a look at the Aizen-Do temple of King Rajaraga, the king of passion. This temple, built originally in 1334, was re-constructed "just" 146 years ago. Peering through the wooden slat-window at the enshrined figure of the deity Aizen Myoo, you'd swear it was looking straight at you - or through you!

Also worth seeing in the Garan area is the Reihokan Museum, storehouse of Koya-San's panoply of art treasures, including mandalas, paintings, statues and ritual paraphernalia.

The highlight of a visit to Koya-San is an early-morning walk through the graveyard leading to Okunoin. Getting off the bus at Ichi-ni-hashi bridge, you follow a tree-bowered path through the old cemetery, where tombs and memorial stones commemorate the daimyos, shoguns and warlords of ancient Japan who are buried here.

The Okuno-in, or inner sanctum, is where Kobo Daishi is interred. At the front of the Okuno-in is the Toro-Do or lantern hall, where 10,000 lamps are kept constantly burning. Some of these have been in continuous flame ever since the sealing of Kukai's cave over a thousand years ago. An amazing atmosphere of peace and calm pervades the surrounds of the Okuno-in.

But a contemporary vision shines through this ancient scene. Memorials constructed by major corporations: Sharp, Toyota, National Panasonic and so forth, vie for space with the graves of prominent business figures and past members of government. There's even a 15 metre-high shining aluminium replica of the Apollo space rocket. This is surely symbolic of a faith that harmonises worldly and spiritual affairs in a most profound synthesis.

A further clue to this synthesis is provided by the previously mentioned five-ringed stupas or "gorintos" that form the tombstones above most of the graves in the cemetery. These rings represent, from bottom to top, the five material elements of earth, water, fire, air and space. But these statues are only the "visible" half of the whole framework, the "known" world. The sixth element, or the "knower", is a mirror-like reflection of the Gorinto. Part of Kukai's teaching lies in the harmonising of the two spheres of wisdom and action.

The union of action and wisdom: maybe that's part of the Japanese secret of success.

One thing's for sure: Koya-San has a lasting influence on the visitor. Like a wild dog biting at your ankles and compelling your attention, this influence just won't go away. And in company with the thousands who visit Koya-San each year, this is one thing I'm profoundly grateful for.


Getting There:
You can buy a through ticket on Nankai Railways' Koya Line, leaving from Namba station in Osaka. The comfortable train trip takes from 1½ to two hours, depending on whether you catch a limited express or a "super express" train. The one-way fare is ¥1120 (about $US11), with a surcharge for the faster trains.

The main form of accommodation at Koya-San is shukubo, or temple lodgings. Over 50 of the 123 still active monasteries accept paying guests.

Some of the temples accepting guests include:

Accommodation in these temples ranges from $US 60-100 a night including two gargantuan meals: not cheap, but worth budgeting for.