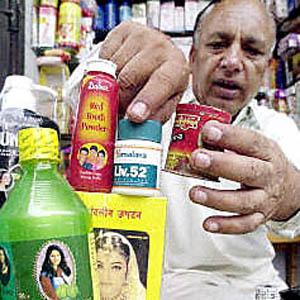 A Pakistani shop-owner arranges Indian cosmetics at his shop in the 'Indian bazaar' in the eastern Pakistani city of Lahore. 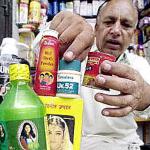 Traders in the "Indian bazaar" in the eastern Pakistani city of Lahore are buoyed by hopes their businesses will thrive with the recent resumption of a bus service between the South Asian rivals.

Known as Paan Gali, or betel leaf street, the bazaar is a unique cluster of some 40 shops selling mostly Indian products in the historic commercial district of Anarkali in the old part of the walled city. Visitors from India say the market bears a close resemblance to New Delhi's Chandni Chowk shopping complex, with similar sights, smells and vendor shouts. People come to the bazaar to buy all types of Indian products, ranging from cloth to cosmetics, from artificial jewellery to herbal medicines brought clandestinely by Indian tourists and Pakistani carriers.

But the bazaar is especially popular among the paan -- or betal nut -- eaters, and shops are well-stocked with betel leaf, betel nuts and chewing tobacco all of which are hot items across Pakistan. "Pakistanis like to chew the sanchi paan of India or the one imported from Sri Lanka," said vendor Muhammad Ashraf. One kilogramme (2.2 pounds) of Pakistani paan costs about 150 rupees (2.5 dollars) but people are ready to buy the Sri Lankan and Indian betel leaf at 450 rupees (7.7 dollars) a kilo, he added.

The bazaar has remained a centre for Indian goods in Pakistan since the subcontinent was partitioned at the end of British colonial rule in 1947. However, the 18-month stand-off between India and Pakistan, triggered by a deadly attack on Indian parliament in December, 2001, forced the market into a slump that it only just appears to be recovering from. New Delhi blamed the attack on Pakistan-based rebels fighting Indian rule in Kashmir and despite Islamabad's denial of its involvement, India snapped rail, road and airlinks with Pakistan.

The incident brought the neighbours to the brink of war last year, and tensions cut the supply of Indian goods, causing prices to soar as fabric, garments, jewellery, spices and daily consumer goods poured in via Dubai. Sales dropped by 50 percent, but bazaar life went on amid hopes that bus and train services would resume one day, said a vendor.

Relations began to improve after Indian Prime Minister Atal Behari Vajpayee offered "a hand of friendship" to Pakistan on April 18, 2003.

"Customers demand every item advertised on Indian television channels as they find them cheaper in price and better in quality," shopkeeper Tariq Mehfooz said. "Indian medicines and herbal products are considered good and effective by the Pakistani consumers," said Amjad Butt, who has been running a small shop in the market for the past 16 years.

"Indian bazaar is a paradise of carriers. They go to India with Pakistani goods and return with Indian cloths, cosmetics and other goods to sell in this market," said Shahbaz Hussain, another shopkeeper. "After resumption of bus service, the revival of road and air links will give a boost to our business which depends on friendly relations between the two countries," said another shopkeeper.