Theater of War Every Evening at the Pakistan-India Border 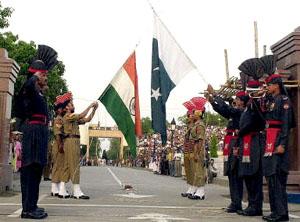 Pakistani paramilitary troopers with their Indian counterparts lower down their respective national flags at the Joint Check Post (JCP) at the Wagah border crossing between Pakistan and India. 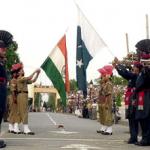 WAGAH, Pakistan, May 28, 2003 - The clunk of heavy boots, glowering looks, aggressive snorts and a final martial handshake -- the goose-stepping of Pakistani and Indian soldiers creates a daily spectacle at the Wagah border post, where thousands gather each evening to watch the flag-lowering spectacle.

"They show their anger and their determination, but it always stays formal," an officer of Pakistan's Rangers border guards said of the ceremony performed in a perfectly coordinated daily ritual for almost 56 years. The stage for the performance is the Joint Check-Post at Wagah, 25 kilometers (15.5 miles) east of Pakistan's most ancient city Lahore and west of the Indian city of Amritsar. A long white line, borne of the 1947 partition of Britain's Indian empire, defines the border between the hostile neighbours and two heavy gates, about two meters (yards) apart, lie across either side.

On the Indian side, some 2,000 spectators take their seats behind the border post after being let in through a path running alongside the border for 50 meters (yards) under the curled moustaches of the Pakistani Rangers. Opposite, around 1,000 Pakistanis take their seats on either side of the Baab-e-Azadi (Gate of Freedom).

The gate was built in August 2001 by Pakistani authorities in homage to the thousands of Muslims killed during the mass migration to their new land in 1947. Cries of "Pakistan Zindabad" (Long live Pakistan) alternate with shouts of "Jai Hind" (Long live India). The Indians play war music, the Pakistanis play religious music. The Indians sing and dance. Pakistanis stay in their seats, men on one side and women on the other.

But some are animated in their own way: Mehrdin, 75, a vegetable vendor in Lahore, comes every day dressed in the national colour green, sporting a long white beard and carrying a large Pakistani flag under the noses of softly booing Indian spectators. A long guttural cry signals the end of the gaiety: Pakistani Rangers in charcoal shalwar kameez (a traditional outfit of long smock over trousers), without weapons, start the ceremony. It is repeated identically on the Indian side.

Pounding the ground with long strides, a Ranger goose-steps hurriedly towards the gate for a brusque exchange of mimicked threats with his Indian colleague. A second joins them, then a third in a bizarre ballet punctuated by glowering glares and warrior moustaches. The gates open. Two officers approach each other and after briefly coming face-to-face shake hands.

Both soldiers can then start to lower the Pakistani and Indian flags fixed high on poles planted at the foot of the gates. Silence falls. Only the clacking of boots and the snorts of the soldiers can be heard. Carefully folded, the flags are carried away by the goose-stepping soldiers. Both officers return to the white border line. A final handshake. Not a single glance exchanged. The gates are slammed shut and on both sides, a trumpet announces the end of the spectacle.

"I came because it's good to mark our difference. It's good for Pakistan to show it is strong," said Tariq, a youth from Lahore who came with his friends to watch the performance for the first time. Intimidated, the group of youths only relaxed when asked whether they had any desire to cross the border. "Right now, if we could!" Tariq and his friends replied in chorus. In the meantime they wait for a warming of relations between the fractious neighbours which will give them the chance to visit Wagah for something other than the martial flag-lowering ceremony.