The Last Train from Bangkok 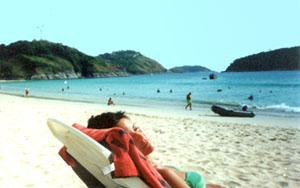 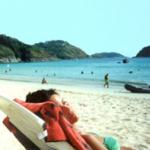 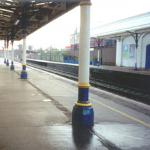 Tomorrow, tomorrow, stuff is so easy to put off when the sun blazes at a steady 40 degrees. When eventually we decided to make a break from the sweltering city of Bangkok and head for the coast I guess we should have expected the trains to be full. Having already experienced the white-knuckle ride affectionately known as the V.I.P. bus trip I had no intention of braving death once more to save a few bucks. So when our ever-resourceful travel agent found us four beds in the slightly extravagant air-conditioned compartment of the night train out of Bangkok that evening we jumped at the chance.

Getting to the station was its own adventure. We'd left ourselves plenty of time, so we thought, but as the taxi honked its horn for the twenty-fifth time in twenty-five yards we realized that we'd vastly under-estimated Bangkok's rush hour traffic. I think it may have taken us about two hours to travel the five or so miles to the station and as we arrived the other passengers were already scurrying around the platform in anticipation of the train's imminent departure. We had just enough time to stock up on supplies whilst playing a variation on the old game what's the time Mister Wolf, sprinting back and forth along the platform to the various stalls and stands while all the while keeping an eye on the last train out of Bangkok which would periodically roar and hiss it's readiness for the off, sending us scrambling back to our seats.

Once on board we settled in to our spacious and comfortable seats armed with enough books and games to see us through a nuclear winter. Our exclusive carriage was at the very rear of the train and as promised air-conditioned. Our traveling companions for the trip were a strange lot. We had Will and Emma from Swindon in England; although Bristol was far better they continued to tell us. Will, relatively new to traveling, was as excited as a puppy at almost everything he saw, heard or touched. His enthusiasm was certainly infectious and before long we were all gawping at the night-lights of Bangkok as our orient express rumbled through the city. Emma, Will's partner, by contrast had been traveling for years and exuded a sense of confidence, which could bring calm to the wildest of storms and instantly put us all at ease. Roan and Mona from the sunny shores of Australia were also on hand to offer tales and whisky to ease the long trip. Mona worked as a tour guide in the north of Thailand, although she confessed that to do so was illegal for anyone not a native of Thailand. She got round the problem by working officially as an entertainer and hoping no one put her on the spot. Her tour guiding had given her a base understanding of the language which she spoke with enthusiasm if not particularly well.

Mona had recently been bitten by a wild dog in the northern regions of Thailand and had been following what was almost a scavenger hunt to get the next installment of her Rabies injection. From expensive resort doctors to the local clinic in a hut on a mountain she was always planning her next fix. If you haven't had your rabies inoculation then you have to have five injections over the course of a week if you're bitten by an infected animal and don't seek attention immediately. Once the symptoms start there's no cure and a death from rabies is slow and terrible. Whilst in Bangkok Will, Emma, my girlfriend Felicity and I had been playing with the children and a little kitten in the grounds of our guesthouse. After the cute yet slightly surly little ball of fluff had grown bored of the constant attention and had opted for a quick escape by biting Will on the arm and scratching Emma on the lip. After the little seething lump of claw and fang had secured his freedom we thought no more about it, until that is we met Mona and Roan. Roan didn't really say much but seemed to like whisky and bridge, which he, Mona, Felicity and I played for about four hours. The game of bridge whilst easing a good portion of our journey also helped conjure images of Agatha Christies Orient Express and as our own train rumbled through the jungle between Bangkok and Surat Thani I couldn't help wondering if the huge packs that Mona and Roan had chained and bolted to their seats contained more than just clothes and books, I mean surely you could stuff a dozen corpses in just one of them. Anyway Mona's tales of rabid dogs and slow and sure death had caught the attention of Emma, who didn't believe in co-incidence, and plans were made to visit the nearest hospital or doctor as soon as we arrived at our destination.

As dawn broke over the rainforests of Thailand we were all children again locked into our own little worlds of exploration and sheer awe at the natural feast that was unfolding in every direction you could see. The trip itself had been anything but relaxing, as I mentioned before our carriage was at the very end of the train and as such it didn't seem to be connected to the tracks rather just dragged along by the violent force of the train in-front as such it bounced and careered along like a tin can attached to the back of a wedding car. Having been on sleeper trains in Thailand before this experience was unusual as normally they're as calm as a Hindu cow.

When we arrived in Surat Thani, a town that surely only exists because the trains terminate there and the ferries begin, we were bundled into the back of a pick up and driven at high speed past various other pick ups each also filled with intrepid explorers, some heading for the beach, others heading for full moon parties, still more heading for the South and Malaysia.

Having recently recovered from a nasty car crash I managed to survive the bus journey to Phuket only by closing my eyes and swearing a lot. I can't really tell you much about the bus journey as I've managed to erase most of it from my memory.

Upon our arrival in Phuket town, as promised, we headed straight for the hospital and after a few minutes Will and Emma were whisked off to see the doctor regarding their life threatening encounter with the savage beast of Bangkok. After about half an hour a very embarrassed couple emerged from the hospital minus a thousand Baht and feeling a little silly. Turns out that there hasn't been a case of rabies from a cat in Thailand for thirty years and when Will was trying to explain why they felt they were in danger from the animals bite the doctors were asking all kinds of questions about it, like how big it was. After he explained that the monster concerned was in fact a kitten about six inches long the doctor responded with the line "you must have been very scared." The Thais have a wicked sense of humor.

The moral of the story I guess is that while taking care in the wilder regions of Thailand is very sensible. You can pretty much relax in what is a very safe and very civilized country. Rabid dogs in the hill tribe regions are not unknown but don't fear your next encounter with Tiddles, or take the precaution of ensuring you're armed with a ball of wool to keep the beast entertained. Giant centipedes however, well that's another story...