Lay Back in Hanoi 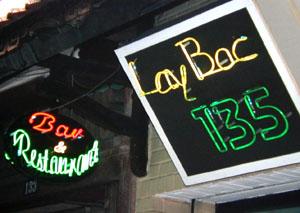 The laid-back Lay Bac Pub can be found at 135 Hang Bac Street, Hanoi. 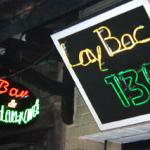 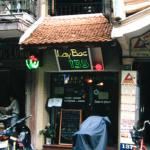 One of the things I like most about Hanoi is that the beer is cheap. In the supermarkets, cans of domestic brew start at 5,000 dong (thirty U.S. cents). Even better, the ubiquitous bia hoi draft-beer joints sell glasses of slightly flat if thirst-quenching suds for a mere 2,500 dong, complete with ice cubes. That's fifteen U.S. cents a glass. I thought such prices couldn't be beat, but then I discovered that one pub in Hanoi regularly offers its customers free beer.

Every Saturday from 6 to 7 p.m. the Australian-run Lay Bac Pub offers all the free beer you can drink, and we're not talking bia hoi watered down with ice cubes. We're talking draft mugs of ice-cold Tiger, one of the better beers brewed in Southeast Asia. Now after going on about the chance for chugging some free beer, I want to point out that the Lay Bac's usual price for draft beer is only 12,000 dong-about eighty U.S. cents. So no matter when you step into the joint, you'll find the price is right.

A capable roster of expat bartenders man the beer tap at the Lay Bac. On some nights your beer will be poured by a genial barman named Shane, who as might be expected in an Australian-owned and operated establishment, hails from Down Under.

"We can mix you a cocktail, pour you a beer, make you a vegemite baguette, and answer any questions all in one go," he says of the Lay Bac. "We're like a little piece of Australia in Hanoi."

On other nights a barman named Paddy will pour your beer. An American merchant mariner, Paddy works in Hanoi when he's not aboard ship.

"It's a good working atmosphere," he says of the Lay Bac. "I don't have one complaint and that says something."

Australian expat Jacobi Leaver opened the Lay Bac in February 2002 in partnership with a Vietnamese family. Leaver named her pub the Lay Bac both because of its Hang Bac Street address and because she planned to offer her customers the chance to lay back and get free shots poured directly into their mouths. Each shot consists of a potent mixture of Vietnamese vodka and Grenadine, a concoction I never actually saw anyone dare to drink.

A platoon of Vietnamese rounds out the staff at the Lay Bac. They are a friendly bunch willing to go the extra mile, as I witnessed when a thief grabbed three VCDs from the basket of a customer's motorbike. With a copper's instinct, a staffmember named Hung set off in hot pursuit. He quickly overtook the slow-footed thief, wrestled the VCDs away from him, and returned to the pub with the purloined discs held up triumphantly like a trophy.

Like most buildings in Hanoi's Old Quarter, the Lay Bac is a long and narrow establishment. "We're nine paces wide and three floors high," says Shane without exaggeration. Indeed, the building is so narrow you'll end up feeling like you're drinking in a hallway. If you're eating, you can either stand at the bar or be seated at tables on both the first and second floors.

Currently the décor centers around the World Cup 2002 championships, which could be said of just about every café, restaurant and bar in Vietnam. A few tokens of Australia hang among the World Cup decorations, including a small national flag with two koala bears hanging off it and a banner over the bar that proclaims, "Aussie, Aussie, Aussie, Oi, Oi, Oi."

In addition to cheap Tiger beer, the Lay Bac offers several other key amenities. For one thing, the pub just installed air-conditioning, which is a real bonus in a city that routinely features 95-degree days and near 100-percent humidity. Even better, the Lay Bac offers an actual bar to lean against, which in my mind is the proper way to drink your pint. The locals like to knock back bia hoi while sitting on tiny plastic stools that rise six inches off the ground. While this can be convivial, it can also be quite uncomfortable. In the end, I'd rather stand at the bar.

This is a good way to get to know the crowd at the Lay Bac. I found both the bartenders and the customers to be friendly and easy to talk to.

"We're people-friendly," Paddy says. "We get our fair share of Australians, but we get a good mix of Westerners, too. We cater to locals as well."

The Lay Bac offers a full menu featuring everything from sandwiches to spring rolls. Prices are reasonable. Paddy enthusiastically recommends the macaroni pie for 28,000 dong (US$1.85). Shane suggests the Tangerine duck for 39,000 dong (US$2.60). Both bartenders endorse the pizza as well.

"Icy cold beer, without the ice in the beer," says Phil, an expat from Melbourne, when I ask what he likes best about the offerings at the Lay Bac.

With its convenient location on Hang Bac Street (Silversmith Street) in the bustling Old Quarter, the Lay Bac is exactly the sort of place that you can drop into for a quick beer or a bite to eat. So head on down to the Lay Bac and do what its name suggests.