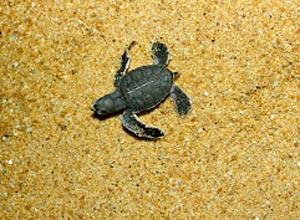 Henry, one hour old and little bigger than a bug, heads for the South China Sea after being released on a beach at the Ma'Daerah Turtle Sanctuary on the east-coast of Malaysia. 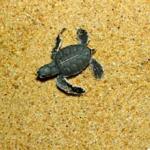 Ma'Daerah Turtle Sanctuary, Malaysia, Aug 19, 2004 - A turtle named Henry headed for the South China Sea one recent moonless night. He was one hour old and not much bigger than a bug, but his flat-flippered dash down the beach showed a determination to live bred into him by 200 million years of turtle history. Plunging down ripples in the sand and struggling up the other side, his rush to the ocean was identical to that of his ancestors -- except for the television lights which proclaimed Henry as something of a hero.

The enormous task ahead of him was simply to survive, in a world where his kind face extinction. A warm wave came up to meet Henry in the horseshoe bay framed by jungle-clad hills on Malaysia's east coast, and, to the whispered urgings of gathered scientists and journalists, he took a dive and disappeared. Henry's chances of survival are perhaps one in a thousand, maybe one in ten thousand, nobody really knows. What is known is that sea turtles in Malaysia, and around the world, are facing the end of eons of existence in which they outlived the dinosaurs.

There have always been predators for hatchlings like Henry -- fish, birds and more recently, human hunters -- but he faces perils unknown to his forebears. On the horizon, rocking gently in the swell kicked up by a tropical breeze, was a line of fishing trawler lights, his first hurdle, according to Dionysius Sharma, turtle expert and national programme director of the Worldwide Fund for Nature (WWF) in Malaysia. Henry is too small now to be caught in the nets -- though later in life they may kill him -- but if he and his hundred-or-so siblings who rushed into the water together gather under the glare, they will be a buffet for predators.

If he avoids the lure of the bright lights and keeps heading out into the ocean, Henry will have made it into what Sharma calls "the lost years". He will find "drift lines", where tides and winds bring food and fish, turtles and other seafarers together on the high seas. If he is lucky and doesn't eat a piece of plastic, thinking it is a squid, or a tar ball from a ship's oil, the next time anybody sees Henry he will be "dinner-plate size" and back in coastal waters feeding on sea grasses -- if pollution hasn't degraded the habitat, says Sharma.

The evocative description of his size is not a problem in Malaysia, where Islam forbids the eating of amphibious animals, but could be a death sentence if Henry headed off to neighbouring countries.

After anything from seven to 20 years, if Henry turns out to be female and survives the vicissitudes of modern life, she will return, measuring up to a metre in shell length and weighing up to 150 kilogrammes (330 pounds), to the beach where she was born and lay eggs. In the course of her life, which might be 50 or 60 years -- again, nobody really knows, says Sharma -- she will lay up to 10,000 eggs. That's a lot of little Henries, but in recent years it has not been enough to ensure the survival of the species.

Henry is a green turtle, and if you're lucky you might spot him on a snorkelling trip off Malaysia's east coast in years to come, but you are extremely unlikely to see his cousin the leatherback, gentle giant and glamour boy of the shelled seafarers. Malaysia once had one of the main leatherback populations in the world, but nesting sites have dropped from some 10,000 a couple of decades ago to fewer than 10 now.

The scientists who watched Henry head off into the sea had just concluded a conference called by the Worldfish Centre, an international research group, to to try to save the few remaining leatherbacks and prevent Henry and his ilk from going the same way. "While there is still hope, it is critical for Malaysia to safeguard the population of its greens, hawksbill and olive ridley turtles before they suffer the fate of the leatherbacks," said the 40 specialists from Malaysia, the Philippines, Indonesia, Thailand, Australia and the United States.

One of the biggest threats to the turtles' survival is the harvesting of eggs from nesting beaches, and the scientists called for more protected sanctuaries like this one in Malaysia's eastern state of Terengganu. "Many populations are in danger of extinction and could be gone in a few years if there is not urgent and effective action," they said in a statement.

Henry, named after the famous 14th century Portuguese explorer Henry the Navigator, has already survived the most dangerous period in his life -- as an egg. And somewhere out there in the South China Sea, he is still swimming, maybe, with the hopes of the scientists riding on his tiny back.