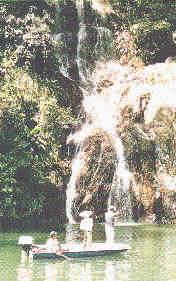 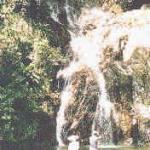 There are natural beauties and then there are man-made ones! One of the prettiest man-made features found in the interior parts of the state of Terengganu is undeniably Lake Kenyir. Spanning over 260,000 hectares, Lake Kenyir is South East Asia's largest man-made lake with its perimeter bordering the state of Kelantan in the west, and the state of Pahang towards the south. The huge Lake Kenyir is also another gateway to Malaysia's famed Taman Negara (National Park).

Within Lake Kenyir are some 340 islands. These islands were once hilltops and highlands. Besides the islands, there are also more than 14 waterfalls and a number of rapids and rivers. Lake Kenyir is, without a doubt, a rich location for many species of freshwater fishes and unique wildlife. With such a rich plethora of flora and fauna, Lake Kenyir promises a trip full of wonderful discoveries and adventures. Imagine a place? breathtakingly beautiful in its natural splendor, an awed silence filling the air with a touch of tranquil serenity, a landscape so peaceful like paradise itself?

Lake Kenyir is a hot favorite for city dwellers looking for some adventure or for those who just want to get away from the noise and dirt of the city. Keen anglers will also love Lake Kenyir. It is a natural haven for freshwater fishes. In fact, the place is naturally overflowing with fishes during the wet season. Overflowing means you can literally catch the fishes with your bare hands! At current, there are about 300 different species of freshwater fish found at Lake Kenyir. Among them are the big Lampan Sungei, Lalang, Parang, Kawang, Terbul and Sebarau. What made Lake Kenyir such a great spot for fishing and fishes? For starters, there are many protruding dead trees surrounding the lake, which serves as the most ideal breeding spot for the fishes. What's more? The algae growing on these trees and branches also serve as the major sustenance for the fishes. Besides providing the fishes with food and a breeding area, these dead trees framing the huge lake is also perfect for photography. Avid photographers will enjoy the many photo opportunities. Fishes are also proving to be quite a good income generator around this area.

Apart from the exotic creatures on lowland, the hilly places of Lake Kenyir are also the highlight of the place! The beautiful virgin jungle is estimated to be millions of years old. To date, no one could pinpoint the exact number of flora or fauna within this huge tropical jungle. According to Perhentian Ferry Travel & Tours' Guide to Tasik Kenyir, there are just so many different types of greenery within the area including Dipterocarpus, Keruing, Meranti and Kapor. The highest point in Lake Kenyir is Mount Chergau. Another peak at this lake is Mount Gagau, which is also the second highest point in Taman Negara after Mount Tahan. Mount Gagau peaks at 4,514 feet above sea level. The rest of the "skyscrapers" include the Bongsu, Tembat, Raung, Kachang, Chergau and Gajah Terom. However, there are no facilities to scale the rest of the mounts except for Mount Gagau, which have camps and hiking trails.

Those who are interested in ecotourism will be pleased with Lake Kenyir and its mountainous tropical rainforest. There are also interesting caves to explore around this area. Bewah and Taat are two towering limestone hills filled with mysterious legends. It is a beautiful sight when mists veil the caves. Before Lake Kenyir came about, the Taat Caves comprises of 3 caves with the Tok Bidan Cave as the lowest entrance. However, it is now submerged underwater. The Tok Bidan Cave still proves to be an exciting spot for archaeologist and historians because artifacts dating back to the Neolithic era had been found in this very place. Should you wish to visit the Taat Caves, you can use the other two entrances. The sight of the stalactites and stalagmites are simply spellbinding! Because these caves hold so many stories to the past, excavation plans are in the works to further unlock these secrets. The caves are also being "upgraded" to make it user-friendlier for tourists. Should you wish to visit these caves, you may take a boat from Pengkalan Gawi. The boat ride takes about 1 ½ to 2 hours.

Aside from caves, Lake Kenyir is also famous for its plentiful and grand waterfalls! You must simply try a picnic by one of these falls as the refreshing sprays of the water on your face is a cool and relaxing way to spend your holidays. The most popular waterfall/picnic spot has got to be Lasir, located 16 kilometers south of Pengkalan Gawi. That is about 30 - 45 minutes boat ride. Lasir has a lovely fall. The multi-tiered waterfall accented by boulders and rocks falls for about 500 feet?! The location is simply beautiful and is well protected by the luxuriant green canopy of the rainforest. Another interesting waterfall is Soak Waterfall. It is nearer than Lasir and you are able to reach the falls in a mere 15 minutes boat ride from Pengkalan Gawi. Be prepared to get soaked at this falls while watching its cascading waters falling over rocky terraces and boulders. There is also a flat sandy spot at ground level that is wonderful for that family picnic. Tembat Falls is different from Lasir and Soak. It is made up of five rapids and has a large camping area at its side. Campers love this spot, as there is also a hiking trail that will lead the hiker to the peak of the waterfall. From the peak, you will get a bird's eye view of the surrounding areas. It will take you about an hour to get to Tembat from Pengkalan Gawi. Other waterfalls include Petang, Leban, Terenggan, Lata Terap and Petuang.

If you are looking for some place to chill off, I strongly recommend Lake Kenyir (known as Tasik Kenyir otherwise). It is beautiful and promises a soul-cleansing moment. If you require further information, you may contact Perhentian Ferry Travel & Tours Sdn. Bhd. or click on to their website.