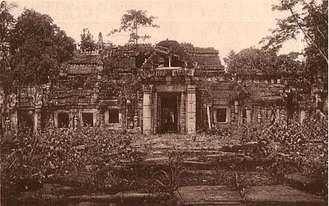 Khmer ruin in the 1920s, the setting for The Map of Lost Memories. 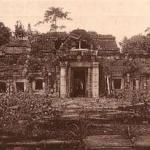 “The one thing to remember about an adventure is that if it turns out the way you expect it to, it has not been an adventure at all.”

—Henry Simms in Kim Fay’s The Map of Lost Memories

Kim Fay, a former editor for ThingsAsian Press, found success in 2010 with her award-winning food memoir, Communion: A Culinary Journey Through Vietnam. Not to be confined to the world of nonfiction, she has struck gold with her first novel, The Map of Lost Memories, published in 2012 by Ballantine Books following a spirited bidding war.

The book, which has been nominated by the Mystery Writers of America for an Edgar Award for Best First Novel, was a labor of love Fay nurtured for more than a decade. “During those fourteen years I also wrote a food book, edited eight guidebooks, and held down a job. So there were times when I had to set the novel aside. But it always called me back, luring me in to write yet another layer until finally the characters evolved into who they were destined to be and each of the many plot pieces fell into place.”

The Map of Lost Memories plunges us into the world of Irene Blum, a loyal and resourceful assistant at a prestigious Seattle museum who has been passed over for the curator position she has coveted—and earned. (Fay, who now lives in Los Angeles, is a native of Washington state and a former bookseller at Seattle’s renowned Elliott Bay Book Company.) The story opens in exotic 1925 Shanghai, at a reception for Roger and Simone Merlin, a power couple in both archaeology and politics: the pair is being feted upon their return from France, where they have been raising funds for China’s Communist party.

Irene has a vested interest in meeting Simone, hoping to gain her assistance in locating ancient treasures in Cambodia—treasures which the not-so-innocent Irene intends to take for her own purposes. Far from home and facing the unknown, she is untested but more than up for the challenge.

“[Irene] is a combination of Nancy Drew and me!” Fay says. “When I was a kid, I loved the way Nancy always took the lead and was the key force in solving each mystery with the help of her friends …. As for the ‘me’ part of Irene, that has to do with our shared unflagging determination to reach our goals. Funnily enough, if Irene reached her goal—the [Cambodian] temple—then I would reach my goal: a novel worthy of being published.” The rest of Fay’s characters—a roster including corrupt officials, her sage but mysterious mentor, and a dashing lover—are rendered with as much affection. “The expatriate world is ripe with notably off-the-wall personalities, and it wasn’t hard to conjure up a supporting cast of eccentrics.”

Fay’s love affair with Southeast Asia has deep roots. “My grandpa was a sailor in Asia in the 1930s, and when I was young he told my sister and me stories about his time there. Because of this, I was fascinated with the region. But I didn’t begin to study it until I moved to Vietnam to teach English in 1995, and then started working on The Map of Lost Memories in 1996. The thing I love about research is that one thing always leads to another, and the more I learned about the history and culture, the more I wanted to know.”

As the action makes its way across the region, the novel’s atmosphere is enhanced by period details, vividly authentic though never obtrusively presented. Fay’s quest for information took her “through every back alley bookstore in Saigon” as well as countless hours spent at the Los Angeles downtown library. As the Internet grew and websites on all manner of subjects proliferated, Fay submerged herself in online research. “I actually managed to construct 1920s Phnom Penh in a kind of diorama using an old map and vintage postcards I found online. I even found a YouTube video of a film from the 1920s of Cambodian dancers.” Armed with her extensive findings, Fay layered her manuscript with telling details, weaving in what fit and jettisoning what didn’t suit the flow of the story.

“In the end, when it comes to the research I did …. I had to leave out far more than I put in. But I think this is to the benefit of the novel, because what remains is integral to setting up mood, authenticity, and plot.”

The story moves fluidly between intimate scenes that delve into the characters’ relationships and the rollicking, suspenseful adventure that takes the lot of them to far-flung places, from the genteel salon of a steam ship to black nights deep in the Cambodian jungle. To capture the sights, smells, and sounds of the wilds, Fay drew on many sources for authenticity, though she did stop short of field-testing her heroine’s most daring undertakings:

“Bottom line: I’m terrified of snakes!” Fay confesses. “So the majority of the details in the jungle/adventure scenes are based on reading … as well as on-the-ground information from Andy Brouwer. Andy is an Englishman living in Cambodia, and he has a fascinating hobby: temple hunting! I remember when I sent Andy an early draft of the book, and he responded that the jungle scenes were too sparse and unconvincing. Where were the ants? Where was the filth? Where was the never-ending humidity? I’m grateful to him for being so honest and pushing me to make this section of the book as realistic as possible.”

The final result is a page-turner that has won praise throughout the literary world. Nicole Mones (Lost in Translation) called it “an enchanting, absorbing first novel, all the more remarkable for its effortless portrayal of a bygone era, now nearly forgotten.” The spirit, pace, and intrigue of Fay’s vivid world conjure thoughts of another medium, recalling the smart charm of Raiders of the Lost Ark or an ensemble quest from Hollywood’s golden age; the novel’s eventual optioning for the movies seems a foregone conclusion.

Fay’s readers look forward to many projects to come from her, whether novels or stories from life. “Fiction and nonfiction each offer their own freedoms and their own limitations, which is why I am almost always working on both at the same time,” Fay says. “Because The Map of Lost Memories is a novel, it allowed my imagination to run wild. With fiction, there is structure, but there are no absolutes. A writer can follow any path a novel takes, just to see where it leads. Of course, there are a lot of dead ends. But sometimes the path winds along to the most amazing, unexpected place.”