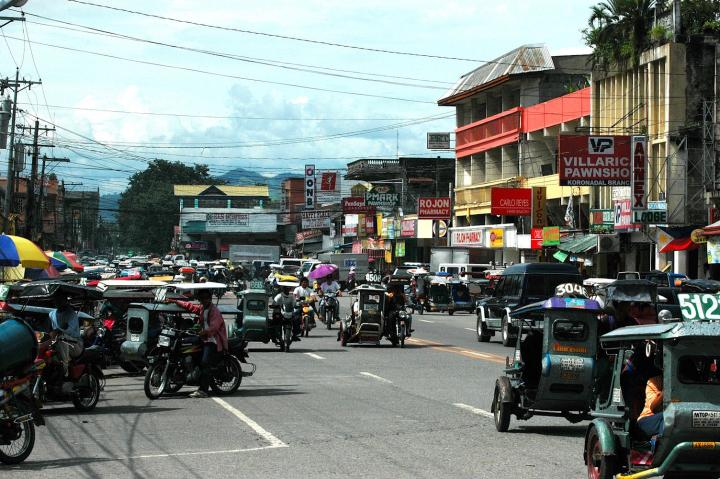 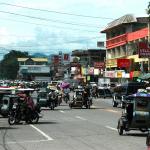 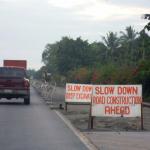 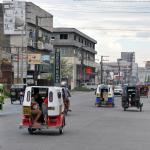 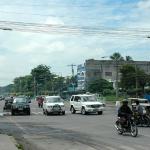 Traffic conditions in Mindanao are often chaotic and driving does not necessarily mean arriving in time at your destination or getting there at all. The lack of respect and consideration for fellow travellers is bringing a whole new meaning to the word traffic.

Cruising the highways on the island also means that there can be many unpleasant surprises ahead and coping with a multi fold of road hazards which will keep your speed down and your blood pressure high. First of all the honking of horns is very common, drivers tootle their warning devices many times, quickly and erratically to ventilate their frustration and irritation, to warn crossing pedestrians they are not going to stop or only to let fellow motorist know they are coming beside, behind or in front of them. At intersections the nonstop flow of vehicle inching forward bumper to bumper during rush hours, constantly going from gas to brake is making it difficult for entering drivers to find suitable gaps to squeeze in between the impertinent and foolhardy drivers resulting in a pandemonium of honking horns and flashing head lights.

In the main cities tricycles are the primary mode of transport and thousands of these motorized three wheelers are driving on the major thoroughfares, many of them ignoring other drivers, using the opposite lanes to get out of traffic jams, making left turns from the far right lane without even looking. Never signalling directions, assuming that the yellow light means "Full Throttle ", breezing through the red lights and suddenly stopping, turning and pulling out right in front of other road users to pick-up or let off passengers. The persevering nature of jeepney drivers that have a habit of halting their piece of rusty iron and bald tires anywhere they please, altogether for taking a leak, getting a snack or simply a chat with whomever about whatever and the not very road-friendly and impatient taxi-drivers that are cutting you off without warning will push your self-control to the limit. On the other hand there are plenty of female drivers who use their rear view mirror to apply or adjust their make-up and the dashboard as a dressing table while driving at a snail's pace. Likewise those people who think they are allowed to drive slow in the fast lane, cruising along without a worry in the world and blasting the loudspeakers of the car radio, unable to hear what is going on outside. Not counting the motorists holding their mobile phones in one hand and carelessly steering their rigs, putting the pedal to the metal. When waiting for a red traffic light being harassed by stubborn and insistent street vendors that are continually knocking on car windows trying to sell bottles of water, cigarettes and newspapers is not a laughing matter either. Yet, the unwary people that are unexpectedly crossing the street are no exception whatsoever, these jaywalkers are often reading or texting messages on their cell-phones, walking gaily through the openings in traffic whenever they pop up, just because nobody is stopping their vehicle at a pedestrians crossing anyhow.

Some parts of the provincial roads are narrow and curvy, lacking centre lines and guardrail, the countless bumps, cracks and potholes, the sudden loose-gravel breaks where the lane is under repair and the traffic signs, which are sometimes placed halfway on the road could cause quite some damage. The many construction sites are guarded by apparently disinterested road workers in make shift shelters, waving barely noticeable with green and red flags to let traffic move on or stop, sometimes you might wonder if they know the correct meaning of the two colours. Driving on the major roads in rural areas is less stressful, the majority of existing freeways are two-lane roads and much of these are being expanded to four-lanes. Though vigilance should be a virtue on these parts of the highway as well, trucks, cars and motorcycles are passing on both sides and even do so where this is prohibited and when another overtaking vehicle is already in the left lane. The most common culprits are over speeding and over packed busses which drivers have a “me first “attitude”, make no room for anyone and presume that size equals priority. These undisciplined dare-devils swirl in and out of traffic at breakneck speed and race against each other, driving the smog belching, 12 ton mass of metal, if it was a Grand Prix race car. The text "keep distance", painted in curly characters on the back of these roaring travelling coffins apparently do not apply for the drivers themselves and is a consistent reminder not to come too close anyway.

But there may be more trouble onwards; being bogged down by an overloaded truck that in all likelihood once served in the Second World War and is having troubles increasing speed uphill is a real challenge for your tolerance. At the same time a great deal of patience is needed when driving in mountainous areas, traffic is regularly coming to a full stop because of crumbling roads, landslides, falling rocks and lost freight. And not the least; not being able to cross that one and only bridge because the structure is damaged by an overweight quarry truck that got one of its wheels stuck in a hole in the bridge deck will end up in a complete disappointment. Tailgating behind a dump truck that is running on crude oil, pouring out more black smoke than a burning stack of rubber tires is truly a nasty experience for driver and passengers. Moreover, on any Sunday there is a great chance of getting stalled by a big eight wheeler with an open trailer that is cramped with people instead of cargo, it may turn out to be a great miscalculation after discovering that this big bucket of bolts is at the rear end of a twenty-five wagon or so funeral cortege led by a dozen motorcycles. Furthermore there are these defiant motorcyclists moving on at low speed, probably thinking they own the road, driving on the outer left side of the right lane, making passing on either side very difficult, if not impossible. And off course the plenty freestyle driving motorbikes carrying four passengers or more, weaving through congested roads and zooming out of blind corners, letting you know that the ditch is always available if and when you need it. Still there is more peril that shall raise an eyebrow or two, drivers changing wheels or trying to repair some kind of technical failure in the middle of a busy fairway, using a few twigs and leaves instead of a warning triangle, marking the spot as their own private territory.

The many cows and goats that are tethered nearby the roadsides do have a tendency to think that the grass is always greener and more tender on the other side of the track; repeatedly they will try to break loose and cross the asphalt, regardless the amount of approaching traffic. The same goes for those playful stray dogs mating in the centre of the road, crossing cats and ducks or a wandering carabao, the unhurried moving bull- or horse carts, swirling bicycle riders and rice harvest that is left on the road to dry. Not to mention the thick clouds of smoke that are drifting across the concrete and the foul stench of burning garbage that is seen and smelt when villagers burn their household trash next to the road, greatly reducing visibility for travellers. Additionally the great number of motorists that are avoiding law- and traffic enforcers conducting a road inspection, upholding that golden "No Plate, No Helmet, No Travel" rule. They abruptly bring their conveyance to a halt and pull over to the side of the road, turning around like greased lightning or park it at the back of a long line of trucks, SUV's, minivans, multicabs, tricycles, motorcycles and many other contraptions with two or more wheels that is equipped with a combustion engine. What follows is waiting patiently until the checkpoint is lifted, perhaps in the meanwhile thinking that it is about time to get a driver’s licence after all and maybe someday register or repair their means of transportation.

Driving at night is the ultimate test for all sense organs; it can include numerous hidden dangers and could literarily become a nightmare. The absence of street lights and road markings, subsequently the cars and motorcycles without tail-lights or with poorly functioning headlights and getting dazzled and blinded by someone else's full beam are adding up to that ongoing assault on your nervous system. Beside all this; a zigzagging car in the opposing lane will tingle your spine even a lot more and definitely make you realise that drunk drivers or the ones that fall asleep on the driver’s seat are more likely to be on the road after sundown. Despite all these pitfalls, it's hard to deny the fun-factor that comes when traversing through the barely-contained chaos on these roads; at least once getting the hang of it.

In fact, it is amazing to see that bus drivers are able to manoeuvre through heavy traffic and densely occupied crossings with incredible precision, all these cabbies speeding along and changing lanes, expertly avoiding collisions. Do not forget the truck drivers that frequently have to slam the brakes and still not lose control over their huge land-barges, because leapfrogging motorists are cutting them off when trying to butt in. And last but not the least the tricycle drivers who, day after day, skill fully have to perform all kind of vehicular acrobatics through numerous jams, bad weather and sometimes under terrible road circumstances, to rush their passengers to various destinations without any delay.

Although driving in Mindanao may seem like a major headache, with lots of patience and a little understanding it is a fantastic way to get around the Island. Nevertheless, it takes permanent adjustment and a high level of concentration to get anywhere and every so often to survive this mind boggling-man-made-madness.