Minorities Are A Part Of The Whole 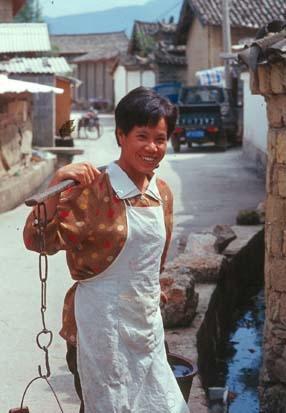 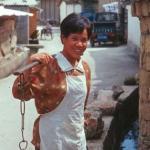 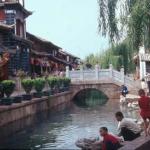 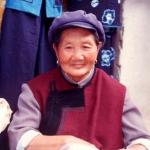 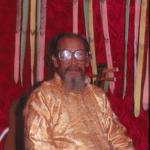 “Is there a future for Naxi art on the world market?” I ask, with a little trepidation.

"Sure”, he replies, “I’m the Oriental Picasso!”

Be this true or not, Zhang and other Naxi cultural artists (including Zhao Yintang, the first Naxi woman writer) spring from an age-old tradition that has richly nourished their work. The Dongba Cultural Research Centre, in the World Heritage city of Lijiang (north-west of Kunming) is a unique window on the beliefs of the Naxi (pron. “nashi” as in pear). The Naxi people are the direct descendants of the ancient Mo Su tribe, with their own religion known as Dongba.

As well as having its own shamans, Dongba has also adopted much of the old Bon religion of ancient Tibet. Adherents of Dongba believe that everything on earth has a soul - so, naturally, Dongba has a large number of deities. There are also strong influences from the pre-Buddhism Bon religion of Tibet and from Taoism.

Ethnically, the Naxi are closely related to the Tibetans, being decended from the Qiang tribes that migrated south-east from Tibet’s Qinghai Plateau. Speaking of Tibetans, have you ever seen a Tibetan bullfight, complete with “matador” and entourage? Sounds weird? In fact, the spectacle is even weirder than the mental image. Two bulls lock horns in a not-very-serious life-and-life struggle, until the matador decides they’ve had enough. A seriously serious victory parade then takes place. All this and more can be experienced at the Stone Forest, a surreal landscape of limestone formations east of Kunming.

The Naxi have since time immemorial been a matriarchal society, with “Dabu” (mother) being the head of the family. The highly innovative azhu (“friend”) system allowed men and women to become lovers without setting up joint residence. Both partners would continue to live in their own houses, but the man would spend the night at the woman's house. If there were any children born to the couple, then they would belong to the woman. In most cases children knew their mother but not their father, who could be any of the many lovers that women were free to choose, so the masculine role model had to be provided by Mum’s brother. Nowadays, these customs can theoretically only be found amongst the Mosuo minority, a subgroup of the Naxi – but it is tempting to think that Naxi mores have become a blueprint for “modern” Western society.

Yunnan is the most ethnically diverse province in China, with 26 different minority groups. The Minorities Museum is one of the best places to experience this cultural diversity is at in Kunming. Within five minutes walk is Kunming’s astonishing new Nationalities Village.

The Minorities Museum features arts and crafts from many diverse regions of Yunnan. In the south of the country there are the Tai (or “Dai”) and Hani minorities of the jungles around Xishuangbanna, while in the north the Yi people with their bizarre fur hats and colourful cloaks rub shoulders with Tibetan settlers.

The Yi, also called Lolo and Wu-man, are an important Tibeto-Burman ethnic group of more than 7 million people living in the mountains of southwest China, with over four million living in Yunnan. The Yi language is spoken is several dialects, with the Naxi, Lisu, Hani, Lahu, and Bai languages being closely related to the Yi. Amazingly, the age-old system of slavery amongst the Yi, whereby the “Black Bones” enslaved the far more numerous “White Bones” lasted right up until the 1950s.

Other groups represented at the Minorities’ Museum include the Jinuo, also in the south near the Lao border and the Wa, a 350,000 strong animist (and formerly headhunting) group living in the south-west of Yunnan, near the border with Myanmar (Burma). I must admit to being bowled over by the staggering ethnic diversity of this part of the world; an anthropologist looking for clues to the connections between peoples would be gobsmacked by the sheer number of loose threads blowing in the wind.

The nearby Nationalities Village is quite extraordinary: a huge complex, well over 150 Ha, with a scale replica of Lhasa’s Potala Palace overlooking a lake, and villages devoted to the Naxi, and about a dozen other minorities, including the Miao (nearly a million strong) and the Lisu, closely related to the Naxi.

Another group are the Lahu, who believe they are born from gourds. I initially thought that they might have been smoking something seriously mind-bending, but was later told that the gourd is a symbol of creation, imitating the womb of a pregnant woman. The delightful and intriguing smile of one of the young ladies in the Lahu pavilion was truly heart-warming – I couldn’t help thinking “you can join me in my gourd any time!”

Also worth visiting in Kunming is the site of the Horticultural Expo 1999. After a successful season the Garden closed temporarily at the end of 1999. It has now been enlarged to 250 Ha, and has become become a permanent Kunming attraction (courtesy, so rumour has it, of a local tobacco company). As well as the Minorities’ gardens, the medicinal plants display alone is ample reason to pay a visit. Not only is there an extensive garden - there’s also a re-creation of a traditional rural hospital, complete with clinic and herbal dispensary. In the same complex, a herbal medicine museum features an extensive range of ancient Han Chinese and Tibetan pharmacological texts. Probably of most interest to visitors to Kunming Horticultural Garden from overseas is the extensive range of Chinese gardens – many depicting the different plants from the various  provinces in China.

Snow Dragon Mountain, just out of Lijiang, is another place where Yunnan’s minority groups can be found. Snow Dragon Mountain is a must-visit, if you can survive the long wait for a chairlift. You alight from the chairlift at Spruce Meadow, an otherworldly place where ethnic dancers serenade the mountaintops, and a few rustic craft stalls offer Tibetan herbal medicines and woollen knits. Miraculously, Spruce Meadow maintains its pristine ambiance, unspoiled by the tourist onslaught.

So pervasive is the minority presence in Yunnan that it’s hard to spot any original Han Chinese still living a traditional lifestyle. China in general, and Yunnan in particular, are changing so fast that no-one can keep up with the pace. “It’s frightening”, says local tourist guide Xu Wen Can. “I've lived in Kunming all my life, and still I can’t believe how fast things are changing”. Then, on a sudden whim, on a trip east of Kunming, Mr Xu decides to stop and visit some friends in a local village.

It’s like stepping back 600 years within a hundred metres - a new take on space and time. The village of Qixin Cun (“Seven Star Village”) dates from the Yuan Dynasty, which reached its apogee around 1550 AD.

“This house is only 200 years old”, says Dong Ke Xuan, head of one of the 500 households that live in the village, “and we’re re-building right now.”

Life seems peaceful for these farmers, who are mainly tobacco growers. Right by the village is a sublime lake, watched over by a 500 year old pagoda. Fish are raised in the lake from fingerlings, and seem to jump right out the water into the waiting nets.

The lady of the house, Liu Xu Xiang, somehow finds the time both for helping with the tobacco curing and for cooking. On the menu for lunch today are roast duck, stewed vegetables, sweet dumplings and rice - plus the obligatory Chinese tea.

After lunch, the old men gather in the village square to test the tobacco (or at least that’s the claim). Gnarled and weatherbeaten, they sit smoking in a row on the storehouse steps, each clad in a navy blue jacket with cap. As elsewhere in China, the elderly are the only people to still wear this Mao-style clobber.

I was surprised by this scenario - surprised mainly because the inhabitants of the village, part of Yunnan’s unobtrusive “majority”, are today almost invisible. As China goes from underdevelopment to full-scale development at a dizzying pace, all the minorities can be seen as part of one intriguing cultural patchwork-quilt.

Getting There: From Shanghai, Yunnan Airlines connects to Lijiang via Kunming. Comfortable buses also make the Kunming-Lijiang run, taking 10-12 hours for the trip.

Accommodation: If you wish to make your own accommodation arrangements, there are some beautifully-situated 1-3 star hotels in Kunming and Lijiang:

Lijiang: Hua Ma Guo Hotel right on the banks of the canal and, uphill from the main square, the Renkour Yuan Hotel.

Guide-books: The best overall guide is Lonely Planet’s South-West China, with an excellent coverage of Lijiang and its environs. For up-to-date info, see A Travel Guide to Yunnan (widely available in Kunming and Lijiang for RMB10, in a surprisingly good English translation).

Acknowledments: The author visited Yunnan as a guest of Helen Wong’s Tours.