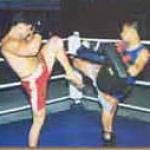 The art of Muay Thai has been the country's most popular spectator sport for hundreds of years.. It is unique among other kinds of fighting disciplines in its approach to close quarters fighting. Fighters are able to more effectively use their elbows, knees, feet and fists than in other martial art

The sport differs from international-style boxing in several ways. International boxing allows the use of only the fists, and blows 'below the belt or to the kidney area are illegal as are certain kinds of punches. In Muay Thai, the fighters are allowed to do almost anything so long as they don't cover their opponent's face with their gloves or poke their opponent's eyes with their fingers. This makes it a more dangerous sport for the participants, but much more exciting for the Thai spectators . Before every match, the two fighters dance around the ring to special boxing music. The music pervades the entire event, both uplifting and following the mood of the evening. The dance is called the 'Raam Muay' or 'Wai Kru' and is intended to honor and pay respect to the boxer's trainer, his religion, family, sport and the 'fighting spirits' . Gamblers and spectators say that they can tell how a fighter will do in the ring simply by watching how he performs the 'Raam Muay'.

One of Muay Thai's most feared tactics is the use of elbows. Boxers have a whole repertoire of forward elbows, back elbows and guards. The fearsome Muay Thai fighters of old were said to be able to use their elbows as clubs, swords and axe - resulting from the hard bone at the tip of the elbow and the size of the appendage make it a fearsome weapon. One of the elbow attacks, the swing-back elbow, is thought of as one of the most beautiful moves in Muay Thai, and some stadiums give special awards to boxers who can knock out an opponent this way.

Knees are another of Muay Thai's unique weapons and skilled boxers can use them in both close and mid-range attacks and parries. There are only a few types of knee attacks, but the power that can be put into a kick is fear-inspiring . Muay Thai opponents often grab the other around the neck to add more force to their knee kicks, and to help their balance.

The feet and legs are the most characteristic of the Muay Thai techniques, so much so that when the Japanese borrowed the sport for their own use they called it 'kick boxing'. The feet of a Muay Thai master can be used in many ways; sweeping kicks, jumping kicks, combinations with other attacks or even straight to the face of the opponent. Boxers practice kicking their own hands to strengthen their legs and increase their range.

The fist in Muay Thai, while not the most spectacular technique for the crowd, is the most versatile of all of the boxer's choices. Jabs can be used effectively to annoy and anger the opponent. While hooks or uppercuts can be used to knock him out through a hole in his guard. Thai legends abound with tale of a man who could box with his fists from a crouching position, and even pull his opponent's whiskers before getting hit. Effective straight punches can do damage to a boxer's body. A punch must always be thrown to start a Muay Thai fight, alone or in combination with a elbow or knee attack. The history of Muay Thai goes back some 2000 years, as long as Thai culture itself. As the Thai tribes migrated south from the southern Yunan province of China, they were exposed to attacks and constant harassment from various groups, including the expansionist Chinese. The people were forced to develop a strong military and a formal military doctrine. The military code was called the Chupasart, and it called on all able bodied people to be prepared to come to the aid of their leaders with the current weapons of the time; swords, spears, axes, bows and others. Since not everyone could afford these weapons, many took up the use of the human body as a weapon. Thus Muay Thai was born.

During the reign of King Naresuan the Great (16th cent.), Muay Thai was brought in as part of the training of foot soldiers and remains a part of their education to this day. Many of the day's battles were settled by soldiers in hand-to-hand combat and Muay Thai reflects this use. Even today, many of the sport's moves are efficient at breaking through the opponent's defences to get to the other side.

s with many things in Thai history, it is said that kings have taken an interest in the sport before. One story involves a king in the Ayutthya period named Pra Jao Sri Sanpetch Vlil . He was said to be an avid boxer, and would often conceal himself in the clothes of a commoner in order to take part in the fun, despite the danger to him . Once he was accredited with beating all comers at a temple fair in Ban Pajanta in the Wiset Chaichan district.

See the video of us at ringside in Chiang Mai Thailand.