Orang Utan: The Wild-man of Borneo 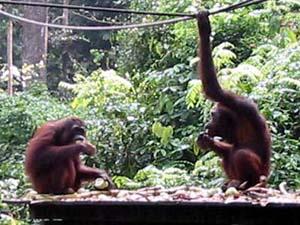 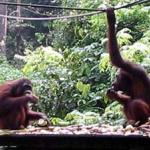 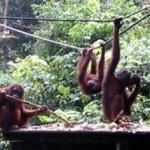 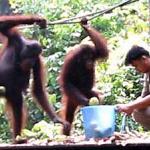 The Man of the Jungle

It is one of the largest of tree-dwelling mammals and shares 96.4 % of the human genome. With two intelligent eyes, a tuft of fluffy hair at the top of its head and a skull structure almost similar to that of man, this great primate have lived in harmony with the indigenous people of Borneo, and Sumatra in Indonesia. Known as the "Orang Utan" -- literally translated as "Man of the Jungle" among the locals, the animal population started dwindling rapidly by the late 1960s. The tropical rainforests, which have been the Orang Utan's habitat for many generations are being torn down indiscriminately by timber tycoons, eager to exploit their logging concessions to its fullest. As the tycoons became instant millionaires, the Orang Utans, in turn, became an endangered species. Requiring huge trees to "nest" for the night and the support of old trees to support their weight -- an adult male can weight up to 100 kg -- many primates could not survive the human onslaught on their habitat.

Some adult Orang Utans are killed by logs falling on them. Others are killed by hunters because as they begin to flee their territory into human villages in search of shelter and food. Many baby Orang Utans become overnight orphans when their mothers are killed or captured. Others are reared as household pets when they are young and abandoned when they become less adorable as adults. These former household pets find it difficult to survive in nature because they have never acquired jungle survival skills such as learning how to swing on the trees, searching for food or protecting themselves against other predators.

In order to give the injured, orphaned and domesticated Orang Utans a better life, the Sabah Wildlife Foundation set-up the first Orang Utan rehabilitation in Sepilok, Sabah. Till today, the Sepilok Orang Utan Rehabilitation Center remains the largest of the four rehabilitation centers -- the other three are situated in Sarawak, Kalimantan and Sumatra (Orang Utans in Sumatra belong to a sub-species and do not share as much genetic data with humans compared to the original Borneo Orang Utans.) Occupying some 43 square kilometers of tropical rainforest, the Sepilok Jungle Reserve is also home to highly-endangered Sumatran rhinos, wild elephants, Proboscis Monkeys, deer, snakes and many types of tropical and migratory birds.

The Sepilok sanctuary is basically serves as a nursery for orphaned baby Orang Utans, a hospital for injured primates and as a safe-house for pregnant Orang Utans or those who cannot find enough food in the wild. Any Orang Utans first brought into the rehabilitation center must undergo rigorous health checks to ensure they are suffering from diseases such as tuberculosis or malaria. Then, the primates are quarantined for 60 days in a special isolation area. After that, the baby and domesticated Orang Utans are placed in the indoor nursery. Here, the babies are fed, cleaned and cared for by park rangers.

Baby Orang Utans below one year old -- who do not know how to hold milk bottles on their own, are even brought home by park rangers every night! The baby Orang Utans wearing disposable diapers we saw on video (the quarantine area, indoor and outdoor nursery are restricted areas) are especially adorable. Once they are weaned, toddlers are then placed in the outdoor nursery. Here, they learn to adapt to living outdoors.

After a few months, the park rangers, acting as surrogate mothers, will teach the toddlers how to swing from tree to tree, how to build nests and how to search for food. Some will imitate the antics of older Orang Utans under the watchful eyes of Wildlife Department rangers. Teaching a toddler Orang Utan such skills are already a mammoth task, but rehabilitating injured or domesticated adult Orang Utans are even more difficult. Imagine trying to put a 100-kilogram male Orang Utan, who is almost seven times stronger than an average man, through the various jungle survival tasks!

After "graduating" from the jungle survival course, the Orang Utans are then gradually placed in the jungle on their own. Many Orang Utans, despite their larger size, are intimidated by smaller monkeys -- especially the marques who do not hesitate to snatch food from the Orang Utan. Once the Orang Utans have learnt how to take care of themselves, a small microchip is implanted into their skin and they are allowed to roam around the Sepilok forest reserve on their own.

Many eventually return to the wild, but some still seek human companionship. These Orang Utans enjoy spending their time at a special Platform, where food is provided twice a day at 10 am and 3 pm. Here is also the place where tourists flock, gawking at the primates and take candid shots of the Orang Utans. Sometimes, proud mother Orang Utans with nursing babies use this platform to show their offspring to park rangers and tourists.

Unlike other great primates, the Orang Utan are the only ones who roam the jungles alone - the only exceptions being mating partners who will live together for about a month during the mating season and mothers with nursing infants, who live together for a few years. According to a research conducted in Borneo, it is believed that the Orang Utan have superior intelligence to allow them to fend for themselves in the wild. For instance, the chimpanzees (who travel in groups) use the "trial-and-error" method while performing different tasks, while an Orang Utan will usually survey the task and think before doing anything.

Relaxing Around the Platform

During my recent trip to Sepilok, the primates were lounging away in the jungle, some performing acrobatic acts on the trees while two big males were sitting on the platform with their legs crossed and facing each other. At one glance, they resemble two men sitting together, chatting away while waiting for the 3 pm meal provided by park rangers. They went about their activities as groups of tourists watched eagerly, cameras clicking away. Two men are armed with professional video cameras -- probably taking some videos for documentaries.

An Encounter with Mr. Greedy-Man

As a ranger approached the platform with some sugar cane and a basketful of guavas, the Orang Utans stopped their playful antics and sat eagerly on the platform. One of the big male Orang Utans, who I later dubbed Mr. Greedy-Man, started snatching the entire basket of guavas from the ranger. Gently, the ranger offered him a guava and slowly placed the basketful of guava on the platform. The smaller Orang Utans approached the basket more cautiously. All seem to prefer the guavas, except one little fellow who monopolized the sugar cane from the start. After eating the guava offered by the ranger, Mr. Greedy-Man went to the basket and took four guavas out of the basket, balancing two on his feet and clutching the other two in one hand while trying to swing on a tree branch with the other hand.

The tourists watching could not help laughing at his crest-fallen expression when the guavas started falling into the trees below one-by-one. However, that did not deter Mr. Greedy-Man, he swung back to the platform, took another three guavas, take a bite from each of it, and put it back into the basket! After the adult monkeys had their share and went off into the jungle, the smaller Orang Utans approached the platform and ate whatever was left. Once all of them had their share, the ranger took the basket and left the platform. Tourists started leaving the place as the Orang Utans went back into the forests.

Individuals, All of Them

Although all the primates look alike to me, I was told that they all look different and the rangers know the monkey's names are at a glance.

"If you look closely, they have different features and their own characteristics," a ranger lounging around the platform pointed out. I found out that some even had moles and different hairstyles!

The trails in Sepilok are well marked. They take one through cool, shady forest. There is also an information centre at the reception point and a souvenir shop too. To ensure safety, visitors are dissuaded from touching Orang Utans, although the creatures are quite tame and sometimes come close. Food and drinks are strictly not allowed into the sanctuary for Orang Utans have been known to snatch food and even handbags with food inside from visitors!

After leaving the sanctuary, we spent time browsing through photos and posters at the museum, which is situated near the entrance before watching a video show at the auditorium. From the video, we learned more about the plight of the Orang Utans and saw the different stages of the Orang Utan rehabilitation. We later found out night walks can be conducted with a nominal fee of RM 20 per person, but prior arrangements must be made with the centre.

Admission fees into the Sepilok Orang Utan Rehabilitation Center is priced at RM 30 for all foreign tourists. An additional camera fee applies. The rehabilitation center is run solely on a non-profit basis and rely on admission fees and donations to stay open. Donations in form of checks or cash can be made at special boxes place at the ticketing counter. Alternatively, you can also donate disposable diapers, toys, milk bottles and other baby products for the baby Orang Utans.