Perfume Pagoda in the Rain 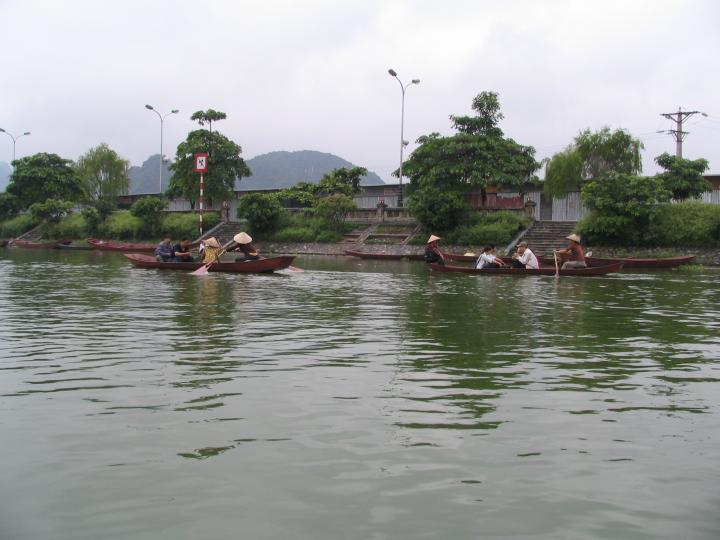 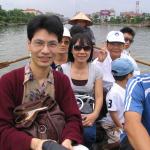 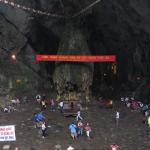 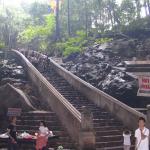 On April 30, 2009 at 8am, I was one of the 12 passengers packed into a van heading towards the highway to the scenic spot--- Perfume Pagoda near Hanoi, Vietnam.  Today was the national holiday--- the Liberation Day.  So everybody was out going somewhere.  There were millions of motorbikes and big buses overflowing with people and the communing in the cities was impossibly crowded.  After 2 and a half hours of crazy traffic and constant horning, we finally arrived at the pier to board the flat boat up perfume river.  I was asked to disguise as Vietnamese from the south, along with a real vietnamese family of 6 and the tour guide, we boarded one larger boat rowed by 2 young girls with conical hats.  I was sure our other non-vietnamese passengers must have paid a much higher price for the same boat ride.

It was a typical cloudy day of Spring, with a light drizzle.  The scenery was very nice.  There were rounded limestone hills along the calm river where taro plants, cat tails and water morning glories grew wild.  Dragonflies hovered around and laid pinkish red eggs on water reeds.  Occasionally troups of ducks interrupted the calm water.  We took photos and ate candies.  The vietnamese talked non-stop and I just soakedup the beautiful landscape.

When we arrived to the area before going up to the Perfume Pagoda Complex, there were several eateries hanging exotic meat available for the hungry travellers.  I saw a wild fox with a very long tail, a small wild pig and a couple rats.  For the vegetarians, there were morning glories and wild pumpkin leaves.  we climbed up some steps through stalls selling incense sticks, prayer decorations and flowers (brunches of palm flowers with q blossoms).  I eyed a stall selling traditional jungle medicine and plant roots.  but we were on the way up first, taking the cable car to the top of the mountain.  There are only 2 girls opting for a trek up the thousands of steps which would take them an hour.  Either way, you could see the lush jungle wetted by the Spring drizzle.

The main pagoda was inside a limestone cave down by about a hundred steps made of uneven stones.  It was called the most beautiful cave under the southern sky.  Inside, the statue of Goddess of mercy was housed in an alter in a natural setting among stalatiles and stalamites.  Some of these limestone features were being worshipped for different reasons.  There were the "boy" stone and the "girl" stone, and also the"gold" and "silver" stones where worshippers rubbed money on the smooth surface.  We all went back down by cable car.  It was important to mention that at the waiting area before getting into the cable car, the passageway was constructed like a maze (  I guess to control the crowd) so a mere 3 meter distance took almost 3 minutes to meander through and it was quite funny.

Back downhill, we had lunch in one of the eateries.  Thank goodness, there were no exotic meat on the table.  We were sharing a soup of wild leaves, fried onion and leeks with pork, deep-fried chicken, omlette, water morning glories wth garlic, grilled fish and rice.  I bought my own bottle of passionfruit juice.

Between lunch and the time to view the second pagoda, I looked at the different roots at the medicinal store.  There were unidentified roots, lots of ginger, tree barks and I recognized lots of tubers of Stephania sp. which were used to treat hyperactiveness.  It has a good sedative effect when used onpatients.  The tubers ranged from fist-sized to huge ones.  I bought the smallest one for a dollar.

When it was the time to go back to the boat, it was really pouring.  I got my unbrella and others had plastic raincoats.  But it did not matter.  We all got drenched as the boat is roofless.  We guided downstream in the pouring rain for a solid hour.  The scenery was nethertheless breathtaking.  Hills from a distance were enveloped by mist and we heard nothing but the sound of rain falling onto the river.