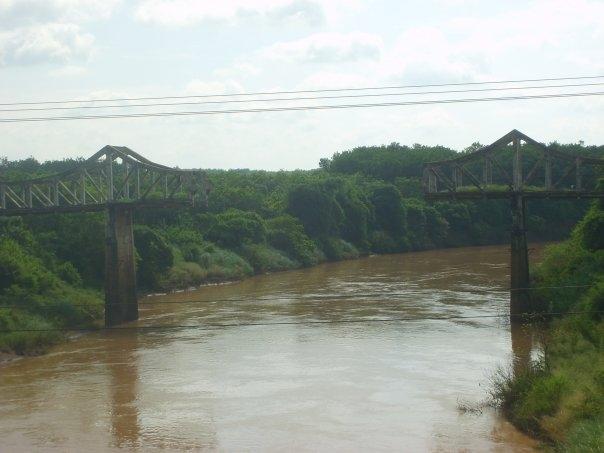 Phu Yao Bridge, one of the many elics of the Vietnam War, is a tourist attraction for travellers keen on discovering the legacy of Vietnam's war history. 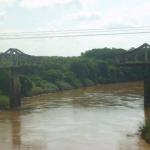 From the roadside on a hilltop overlooking a cornfield and a disused bridge with a large gap in the middle that once linked the two ends, Van's face grew serious as he transformed from being a professional motorcycle guide and historian to a soldier recreating a bloody battlefield in the 1970s, following the withdrawal of American forces from Vietnam. He was a young man fighting for the U.S. backed Army of the Republic of Vietnam (ARVN), defending against the National Liberation Forces of South Vietnam, or the Viet Cong.

"The bridge you see over there," he started, simultaneously pointing to my left and gesturing to the structure approximately 300 metres away, "is Phu Yao Bridge. It was destroyed by North Vietnam bomb during the war. I was in a battle here once, a very big fight that went for 3 days. Sometimes I still hear the shelling at night when I am sleeping and I wake up thinking I am still in combat."

"What did the fields look like back then?" I asked.

"You see the corn fields ahead," Van continued, "no crops existed back when I fought here. It was all bare earth and surrounded by landmines, and we were caught in the middle of a Viet Cong ambush."

When I quizzed Van as to whether he was caught on the same grounds when the attack started, he elaborated further. "I was platoon leader. Initially I was stationed in the bunker with my troops 200 metres from the bridge, but when the fighting started, my job was to get to the tower, take cover and fire my bazooka at the enemy. I simply wanted to kill as many of them as possible."

Van averted my eyes to a bullet riddled brick structure that was partially destroyed, but like many relics from the Vietnam War era, is still standing. The government, in its attempt to provide a living history lesson as well as attract the tourist dollars from visitors flocking to the country, sees the benefits from cashing in on the legacy of the country's bloody civil conflict that killed millions of Vietnamese, as well as instilling national pride and simultaneously reminding the world of Vietnam's resilience.

"The enemy were approaching from the Cambodian jungle where they had sought refuge. Most of my soldiers were stranded following a siege as part of the Phu Yao insurgence, so my job was to rescue as many ARVN guys as possible, and drive the Viet Cong away."

"Did it work? How many enemy soldiers did you kill?" I chimed in.

"Yes it worked, and I did shoot enemy fighters during battle. But when you are in a life-or-death situation and you want to avoid being hit, numbers and logic do not matter. You just want to survive." Van told me. Around 200 men were killed in the battle.

While I stopped to take some pictures of the original bridge, Van told me about his life as a soldier and the aftermath of war in his shoes. After finishing school at 17, he enlisted with the South Vietnamese or Republican Forces, and backed by the Americans, served a number of years as a soldier and marine in the Central and South Central highlands. He was also stationed on Vietnam's central coast, stretching all the way up to the former Demilitarised Zone (DMZ). Once the war ended in 1975 after Saigon fell, Van was arrested and served time inside a concentration camp, toiling for long hours on the farm during the day.

For 3 years, Van was surrounded by barbed wire and along with other Prisoners of War (POWs) attended nightly re-education classes designed to remove any existing prejudice Van had previously held about the reunification of a socialist Vietnam.

Van admits to frequently being tortured during his term of imprisonment but chose to remain silent when it came to diverging specific details, stating that it was standard for everybody to undergo some form of punishment before reconciliation. Upon completing his full sentence, he continued to farm under the close eye of Communist Party officials for a further 5 years, but in 1992, Vietnam re-integrated with the international community. Employment prospects were limited, so Van decided to ride motorcycles and earn an income by transporting residents within and around Dalat. However, he was banned from contacting and maintaining friendships with foreigners for many years.

Along with a handful of other war veterans, Van became one of the founding members of Easy Rider in 1998. The Easy Rider group are freelance motorcyclists offering a personalised method of viewing, interacting with and breathing in Vietnam, its language, culture and people. Van sees his war legacy experience as a positive attribute, and uses his knowledge to take tourists and give them a first-hand account of life in Vietnam.

"There are many people who claim to be an Easy Rider member but I know who the fakes are." Van says. "They don't have uniforms, registered identity cards or the memories and nightmares of what we endured. We are a brotherhood. Some of the pretenders are either scammers or new recruits in the police force. The young officers are actively encouraged to join in by their superiors, and younger officers do not disobey orders if they wish to advance their career and get a higher ranking in the force."

"Is it because they can also get a second income?" I asked.

"Yes, but it means that any individual looking suspicious can be watched closely." added Van. This is especially applicable in the northern part of the country where some suspicion of outsiders is still apparent years after the war reached its completion.

Later in the day, after riding through the South Central Highlands for several hours and passing vast lands of rice fields and tea plantations, we stopped at a war memorial honouring fallen Vietnamese soldiers who had died defending their land and beliefs by fighting the French, America and their allies, and each other between 1954 and 1975. Fifteen million Vietnamese soldiers died in this 21 year period.

"The government got all of the bodies that they found after the war and dumped them in one grave site,'' Van told me after I had returned from climbing the hill, passing the graves and taking some time to pause at a giant silver coloured lotus flower statue and reflect on the legacy of numerous battles played out on Vietnamese soil.

Speaking with Van gave me a deeper appreciation of the experiences of Vietnamese people who lived through an environment and whose vision centred around getting through battlefields and being appreciative of surviving each day, let alone dreaming of their futures in a post-war scenario that seemed distant. His manner of re-telling war stories was calm, measured and rarely animated, and the way he would conclude his lessons with emphasising how everyone learnt to forget about hatred of ideological differences for the sake of the country, seemed to reflect thoughts I held about the pride Vietnamese felt in overcoming adversity and getting on with life.   But Van also shared the darker side of the military life, and pointed out that intense rivalries between allied soldiers fighting on the same side in territory safe from incoming raids and gunfire could be as damaging as being in the line of fire during combat.

"I was in a bar one time drinking with my platoon. There were American and South Korean soldiers present too." Van told me. "They were belittling us Vietnamese, saying that we were poorer soldiers because we did not get paid as much money as them. In the beginning, I stayed calm and just ignored them, but then the U.S. soldiers started pointing me out. I wanted to go after them because they were saying demeaning things about Vietnamese people."

For the first time, I noticed an increase in his voice's intensity and he closed his eyes, flashing back to the exact moment.

"One guy started bragging that our women were dirty whores. Some of his platoon joined in, and then it became a competition about how many women they could have sex with in one night. Then four or five Americans came over and wanted to fight me."

I was beginning to sense a climax but what happened took me completely by surprise.  Van cleared his throat, and raised the tone in his voice.

"Suddenly I had enough. I could not hold myself back any longer. From my weapons stock, I pulled out a hand grenade and took out the pin. All the American and Korean soldiers started screaming and ran out of the bar when I started counting. Four of my own men held me down and then frantically worked to put the pin back in the grenade before the 7 seconds were up. Otherwise, it would have exploded."

Van admitted that he remained mad for a long time after the incident and it took him a long time to finally resolve his personal issues related to fighting in the war. Vietnam lost many fine men, but he lost many friends. His final admission about life during conflict stuck with me long after I left Vietnam.

"War reduces the humanity in us, and it is even worse when you are fighting against your own countrymen because they see things a little differently than you do. Back then I was an angry young man and truly believed that these people I was fighting against were not like me, they were evil."

I asked him about his modern day perspective.

"Now the same people that once wore a different uniform, saluted to a separate flag have only one interest, love, an allegiance that we all subscribe to. Peace and friendship in my Vietnam."