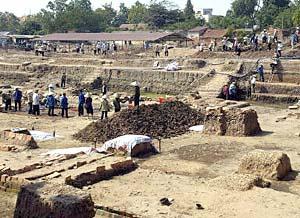 Excavation site of an ancient royal citadel dating back to the 7th century in Hanoi. 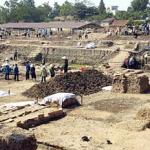 Construction of Vietnam's new parliament building in Hanoi has been halted after archaeologists discovered the ruins of a royal citadel dating back to the 11th century on the proposed site, state media said November 6, 2003. The Politburo, the ruling Communist Party's elite decision-making arm, has postponed further work on the new National Assembly pending further consultations, the party's Nhan Dan newspaper said. The move follows an appeal by archaeologists and historians in September for the government to put back the October 1 deadline for the official ground-breaking ceremony.

The Nhan Dan said the Politburo will consider whether or not to find a new site for the legislature. The 15-member body also ruled that a national conference centre, which was planned for the same site, will now be built on the outskirts of Hanoi near the recently opened My Dinh National Stadium.

Land clearance on the site of the proposed parliament, located in the heart of the capital near the Ho Chi Minh Mausoleum and the existing legislature, began early last year. However, archaeologists called in to conduct a mandatory survey of the site discovered last December a wealth of relics from five feudal dynasties dating back to the 7th century.

"It is a surprising and priceless discovery. We uncovered the foundations of a big palace, a number of architectural works and millions of artifacts from the Chinese Tang dynasty and the Vietnamese dynasties of Ly, Tran, Le and Nguyen," said Professor Phan Huy Le, chairman of the Vietnam History Association.

The prize discovery was the palace, the largest of its kind discovered in Vietnam, with foundations reaching 62 metres (203 feet) in length and 27 metres in width. This, he said, belonged to the western part of the Thang Long royal citadel, which was built in the 11th century when the monarch Ly Thai To moved the capital of Dai Viet state, as Vietnam was then known, from Hoa Lu, outside present day Hanoi, to the northern city.

Human remains dating back to the Ly dynasty (1010-1225) were also unearthed, including the bones of two children believed to be aged eight or nine-years old. Their skeletal remains were discovered near the palace's main foundation pillar.

"We think they could have been buried alive to ward off evil spirits," said Le. Although animals have long been substituted for humans, the practice is still believed to be carried out in remote, rural parts of Vietnam.

More than three million bronze, gold, porcelain and ceramic artifacts, some depicting dragon and unicorn heads, were also discovered, as well as a sophisticated drainage system, including some wells that still bear water. Le said some of the artifacts appeared to have originated from China, Japan and the Middle East.

For the moment at least, archaeologists have won the opening round to preserve Vietnam's cultural heritage against certain elements in the government dismayed by the financial costs of finding a new location for the legislature. But even Le acknowledges the enormous task he has on his hands to realise his dream of establishing an outdoor museum on the site. "Even if we don't have the funding and technology to do this now, at the very least we should preserve this site for future generations. If we destroy our heritage we are committing a big crime," he said.