Sunset over the Chao Phraya 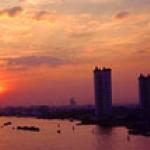 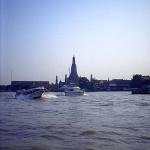 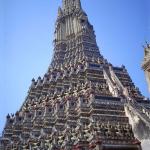 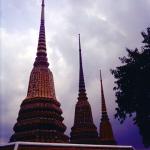 Thais call Bangkok Krung Thep, "City of Angels"; the name dates from 1782, after the original capital of Ayutthaya was razed by the Burmese, and a new capital was created along the Chao Phraya, the great winding river that flows through the country to the Gulf of Thailand. In the mid nineteenth century, Bangkok was a city of canals, a Southeast Asian Venice; by the mid twentieth century, most canals had been filled to form today's congested, humid, exhaust-tormented roads. The angels now have blackened wings and a chronic cough.

The roads are a jam of cars, buses, and trucks; the heat creates dancing phantoms above the pavement. Motorcyclists, their faces covered with masks, weave between the idling vehicles. Our eyes sting and water; we could taste the exhaust in our throats.

Sidewalks in Bangkok are places of commerce, and are as jammed with vendors as the roads are with vehicles. Thai appetites seem unaffected by the soupy, exhaust-laced air, as the many food vendors will attest. Numerous stainless steel carts are restaurants on wheels selling fast foods, Thai style, cooked over hissing propane flames; the vendors, shaded by umbrellas, prepare a variety of dishes stir-fried in woks. Some vendors work from fold-up tables and grill squid, fish, or eggplant on charcoal braziers, the smoke blending with the smog. Still others prepare their dishes at home and carry them to the streets in pots; plastic pails or shoulder baskets, offering hungry customers curried rice and shredded fish served on lotus leaves.

We negotiated with the driver of a tuk-tuk, the ubiquitous two-cycle three wheeled taxis that sound like a chain saw, and headed for Chinatown, a trip that he said would take about thirty minutes; his accompanying hand gesture indicating more or less was unnerving. Squeezed into the three wheeled, canvas topped vehicle, we chugged into the jam of traffic, trailing a cloud of black exhaust.

Forget white water rafting. Forget bungee jumping and parachuting. For adrenalin-laced adventure, a tuk-tuk ride in the congested streets of Bangkok is unrivalled.

We jerked and rattled, gasped and coughed; it was unclear whether the driver's face in the mirror reflected a grimace or mad grin. After about fifteen minutes of white-knuckle terror, we were soon walking in Bangkok's bustling, hectic, bewildering Chinatown.

Gold shops with daily prices posted in the windows dazzled with their gleaming walls of chains. Herbal remedy shops displayed bins of dried seahorses, toads and insects; an elderly woman with a cigarette clenched between her teeth picked through a basket of severed deer tails. Side streets were lined with shop houses, their goods spilling into lane ways that are as crowded and noisy as a carnival midway. A motorcycle stacked with bolts of material attempted to wedge through the crush, its constantly buzzing horn unheeded. Incense coils smolder, filling the air which is already thick with cigarette smoke and exhaust.

Bangkok is definitely not a walking city. Although the new Sky Train has cut travel time from hours to minutes, the streets are hot, humid, and pollution-thick.

There is a healthier, cooler Bangkok along the Chao Phraya. It was here on the east bank of the river that the city began some two hundred years ago.

On the terrace of The Menam, the riverside hotel farthest down river, we relaxed and watched the river flow by, savoring the breathable air and allowing the smog-induced Bangkok blues to ripple away with the current.

Barges chugged by, two or three in tow, carrying mounds of sand and gravel; motor launches, the river equivalent to buses, transported crowds of passengers to and from the numerous landings. The loudest noise on the river comes from the rua hang yao, the long-tailed boats. These long, low, narrow, canopied hot-rod taxis of the Chao Phraya are powered by car engines adapted to drive a propeller on the end of a long shaft. A block away can be heard the drone of the crammed and poisonous streets.

We boarded a motor launch for a tour of the remaining unfilled klongs, the canals that meander through the Thonburi region on the west side of the river. In only a few minutes we had traveled back to nineteenth century Bangkok.

There are no class distinctions apparent in the villages along the klongs; ramshackle stilt huts with rusting tin roofs stand beside high-peaked teak houses. Gilded temples gleam amid squalid shacks. The focus of life here is social and familial. Laughing children jumped into the canal, splashed gleefully in the murky foul smelling water, climbed out and then, with a squeal, jumped in again, while dogs ran back and forth barking.

Two men hacked at a tangle of water hyacinths entwined in a pier. Imported from Indonesia because of their beautiful flowers, water hyacinths have become a problem in the klongs; perhaps nurtured by the high coliform content of the water, the tenacious plants are clogging the canals and snarling boats' propellers.

A woman placed flowers and incense at a spirit house on her verandah and bowed, her hands held together above her head. Little girls played peek-a-boo behind huge earthen jars used to collect rainwater. A man climbed out of the water, soaped himself vigorously and then plunged back. Neighbors chatted while hanging laundry or tending to caged birds. Orchids bloomed everywhere. The Thai philosophy of sanuk--fun and enjoyment--was extended to the gawking tourists floating by; instead of annoyance or resentment at the invasion of privacy, there were waves and smiles and hollered greetings.

The klong narrowed as we entered an area of commerce; the water was jammed with narrow level-bottom boats paddled predominantly by women wearing blue smocks and wide-brimmed, flat topped hats of woven palm leaves. Traffic jams like this we could handle; as vendors wedged their goods-laden boats through the congested canal, there were the sounds of wood nudging against wood, the plash of paddles, and the voices of haggling as fruits, vegetables, spices, flowers, fish and meat were bought, sold and bartered.

On our trip back to the hotel, we stopped at the stunning Temple of the Dawn, Wat Arun, its central stupa spiraling majestically over 300 feet above the surrounding pavilions. Of the over three hundred temples in Bangkok, Wat Arun is perhaps the most recognizable landmark in the city. The spires of the temple, embedded with shards of Chinese porcelain, colored glass, and mirrored tiles, sparkle and glisten in the rising sun. A man with a number of caged birds sat behind a sign in English promising prosperity if the birds are purchased and set free; nearby, a group of saffron-robed monks, their heads freshly shaved, gazed out over the Chao Phraya in quiet contemplation.

We could not leave the city without spending our last few days at The Oriental Hotel, the grande dame of Bangkok hotels established in 1876. A young lady with smiling eyes greeted us by name on the pier, presenting us with a jasmine garland. With considerably less grace, we returned her wai, the Thai gesture of respect and greeting made by bowing with hands held together as if in prayer. She introduced herself and her name was a song. When complimented on the loveliness of her name, she replied with a shy shake of her head, "It is too long." Most Thais have polysyllabic surnames. She escorted us through the gardens to reception where we were again greeted by name.

Our twelfth floor room overlooking the Chao Phraya was marble and teak, silk and orchids.

While we were still appreciating the luxury of the room, the floor butler arrived, presented his card, and told us he was only a ring away; before backing out of the room, he gave us each a baggage card displaying the Oriental logo on one side and on the other, in intricate graceful handwriting, excerpts from the teachings of Buddha.

At lunch at Lord Jim's, one of eight restaurants at the hotel, we enjoyed a sumptuous buffet in a room that resembles the deck of a ship and overlooks the river. The service was attentive without being distracting as the smiling and graceful staff anticipated our needs. Young boys, their hair just so, wearing white tunics, white gloves, and ballooning knee breeches, stood in the lobby vigilant to the needs of guests, opening doors, pushing elevator buttons, bowing and smiling; they are a part of a team of one thousand employees at The Oriental.

The Authors' Lounge, once the courtyard of the original hotel, is now enclosed with a vaulted glass roof and furnished in white rattan; it took only a little imagination to glimpse the ghosts of Joseph Conrad, Graham Greene, and Somerset Maugham. It was here that we read the snippets of Buddhist philosophy given to us earlier. One read in part:

Pleasure renders the mind buoyant and displeasure deflates it;
the magical medicine provided by a calm, quiet, peaceful mind
is attained by not liking or disliking what the senses perceive.

We realized that The Oriental Hotel was decidedly not the place to embrace the intricacies of Buddhist thought.

At twilight, viewed from our twelfth floor balcony, the city was blanketed in a grey haze, a few buildings piercing the shroud like stalagmites; the lead-laden streets seemed a part of another place, another time. Below, the Chao Phraya rippled, glistening in the setting sun like gold flecked temple roofs.